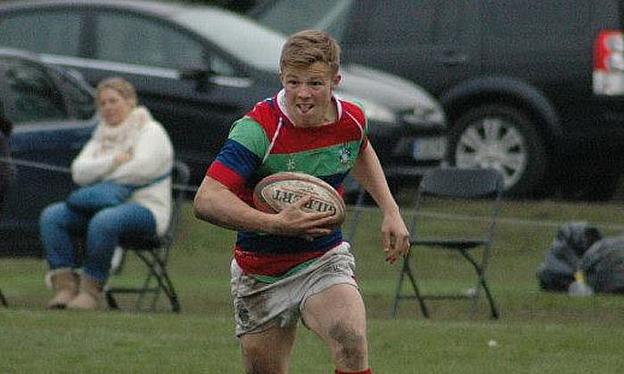 Millfield rugby ace Tom Whiteley, the standout player at this year’s Rosslyn Park Sevens tournament, has backed-up the hype surrounding himself after signing a professional contract with Premiership leaders Saracens.

Whiteley, who was born in South East London from humble rugby beginnings at London’s Battersea Ironsides Rugby Club, has been one of the stars of school rugby over the last two seasons, with this year’s Rosslyn Park Sevens Player of the Tournament award the highlight of his time at Millfield.

It is from then that people really began to take notice of Tom, with Worcester Warriors first showing interest, before the Heineken Cup finalists Saracens sealed the deal; where he will follow in the footsteps of Millfield alumnus Mako Vunipola, now at Saracens, who was a member of the Millfield first team between 2007 and 2009.

The young nine spent his first year and a half in the first team playing at full-back, before moving back into his favoured position: scrum-half, which is where Saracens are looking for him to feature.

As Tom begins his time with the premiership outfit this summer he is set to learn under the watchful eye of the club’s current nines: Neil De Kock, Richard Wigglesworth and Ben Spencer.

Talking Rugby Union have pinpointed Tom as a definite ‘one to watch’ for the future as he takes a rightful position in our site’s highly successful ‘Emerging Talent’ section; which already boasts features on the likes of England winger Jack Nowell, Munster flanker Sean Dougall and London Irish wing Fergus Mulchrone.

TRU Editor Austin Halewood caught up with Tom just a few days after the ‘big news’ was announced, to hear his thoughts on his future at Saracens.

“I didn’t really expect any of this to happen, to be honest,” Tom began. “Two weeks before I actually signed the contract I didn’t really have anyone talking to me.

“In a way, I was sort of speaking to Worcester, but nothing was really happening and then when it finally came about I was just amazed and shocked, I suppose, at the same time.

“It still hasn’t really sunk in at the moment, but I’m sure it will do on the first day of pre-season.”

According to Tom’s contract, he will not be involved in the end of this season with his new club, as he finishes his studies at Millfield, but will began full training at the start of pre-season on July 1st.

“It was the fact that they’ve got some of the best in English rugby training there and some of the best scrum-halves: Richard Wigglesworth, Neil De Kock and Ben Spencer, that sealed the deal for me,” Tom continued.

“There is so much experience above me – it’s going to help with my game and my development as a player so much.

“After winning Rosslyn Park I got the Player of the Tournament award there and Saracens asked me down to join them for a training day.

“I was there for a full day of first-team training – which was amazing; got a look around the club and the chance to meet everyone, and from there they then invited me back for another week and a half and I found out the news just after that.”

From now and over the summer, although Tom will not be training with the squad, he has been given a full gym programme and all his nutritional advice, alongside someone from the club will come over to Millfield once every three weeks to see how he is getting on.

Though Tom doesn’t have his full pre-season schedule yet, he is already aware of Saracens’ plans for his first season at the club.

“I’m going on loan to Old Albanians, which is the local club right near Saracens, where I will play at the weekends for them and then hopefully in the A-League side until I get my chance.”

Alongside Tom’s professional rugby contract next season, the young Millfield student is able to continue his studies as a part of his agreement.

“I’m going to be doing a strength and conditioning course part-time alongside my training as a fall-back, because I know, obviously, that I can’t play rugby forever.”

After looking ahead to the coming season and the fantastic possibilities that will come alongside a professional contract at one of the Country’s leading teams, Tom began to reflect on his time at Millfield and the impact the school has had on his future.

Tom has not played for a club the last few years and has concentrated solely on schools rugby.

“It’s literally all Millfield rugby where I have been noticed,” Tom explained. “This season we didn’t lose a game of sevens, so I think that really helped in a way.

“I’ve enjoyed a really successful time at Millfield: in my first season in the first team we won the St. Joseph’s Festival – which is obviously the national 15-a-side tournament – and we cleaned up on all of the trophies there.

“We had a bit of a disappointing sevens season in my first year, though, but this season has been brilliant – it all clicked.

“We played so well together that we were unstoppable, in a way.”

Alongside the school’s success as a team, on a personal level Tom continued by expressing how the Player of the Tournament award at Rosslyn Park was one of the best moments of his career.

“Absolutely,” Tom maintained, “at the moment Rosslyn Park is definitely my career highlight.

“However, obviously, it’s important to mention that I would never have got that award if it wasn’t for the people around me as well.

“You can only really win the award if your team wins the tournament and it’s thanks to all of the players around me that we managed to win – so I got very lucky in a way.”

It was thanks to Millfield that Tom has now enjoyed a brief period at full-back before moving back over to scrum-half where he now resides.

“When I joined Millfield in year 9 I was a scrum-half,” Tom began, “but when I got to the end of year 11 the first team coaches thought it would be better for me to play at full-back – which is where I actually got my first team colours.

“Then half-way into my Upper Sixth year, at the St. Joseph’s tournament actually, I switched to scrum-half to just see what would happen and, obviously because I’d played there before it wasn’t completely new to me, and I stuck at it.

“Saracens are working a lot on my box-kicking and passing and hoping to turn me into a full scrum-half, because I’ve still got a few full-back mentalities within me – I just want to run the whole time but, most importantly I want to get the passing and box-kicking down.

“When I was training there a few weeks ago, Neil De Kock was giving me 45 minute one-to-one training sessions on box-kicks and passing; I was learning so many little things that you wouldn’t really think about but the moment you change it, those skills have already become ten times better than it was before.

“Scrum-half is definitely my favoured position, but to be honest I don’t mind where I play, really – I just want to play rugby!”