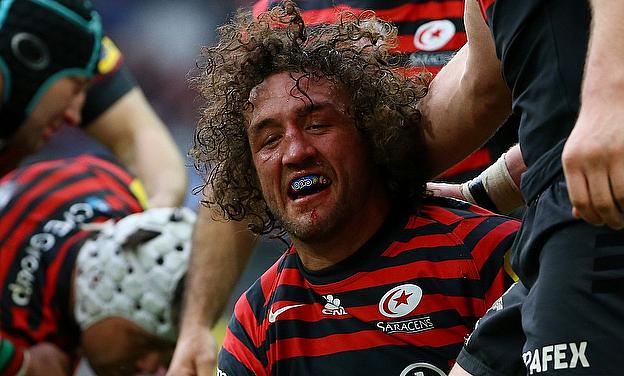 Jacques Burger admits icing his problem knee eight times a day is "borderline stupid" as he staves off ligament damage that almost ended his career.

The Saracens flanker revealed a strict daily pain management routine that has allowed him to defy medical advice and return to top-level rugby after a two-year injury battle.

Burger does not keep count, but the statistics books indicate his 36 tackles in Aviva Premiership action against Exeter in November top his stunning personal chart.

The 30-year-old flattened Clermont almost single-handedly with a brutal frenzy on Saturday - then rejected any notion of boasting a high pain threshold.

"I've got a 'game ready' machine at home, next to my settee, it compresses and ices and keeps the swelling down," said the combative flanker.

"I ice my knee about eight times a day: I'll fill up the machine with ice and I'll ice it for 20 minutes, take a break, then go again for another 20 minutes.

"It's becoming a routine now.

"I go to the physio every morning and get loosened up, but at the weekends I'm fresh and it's just amazing.

"I'll do whatever I need to do to be out there.

"Rugby is not the nicest game to play if you want to manage your body well.

"It's borderline stupid: people are going to think I'm too dumb to feel the pain, but I don't know.

"I don't think I'm tougher than anybody, I just think I've got a good attitude.

"I think you hide it really well during a game, and luckily I've got a face that hides pain really well!

"I just crack on with it, and try to get back up and do the next job.

"After the two years I'd been gone, I didn't think I was going to come back playing, so a bit of pain here and a bit of pain there doesn't really bother me."

When Burger packed his kit bag for Saturday's Twickenham trip, he admitted he caught himself realising he could so easily have been packing up for a premature return to his Namibia farm, had he not kept faith with his lengthy recovery.

"It's unreal, I thought about it on Saturday morning, packing my bag," he said.

"There was a time when I watched the guys from the sidelines last year and wondered whether I'd ever get back.

"And then if you get back, will you be as good as you were? I was lucky the club backed me 100 per cent.

"In my heart I knew I was going to get back, I didn't care what people said.

"Every time I go out there I hope people can see I'm having fun, because I honestly do have fun when I play, and Saturday was no different."

"We're not in the Premiership final yet, and we must remember that," he said.

"For now, one is not enough: if we do lose, then that's the way it is and we'll focus on what's next, but I think we're ready.

"I think we're ready to win both, why not? We've got everything, we're playing well.

"So we know the challenges ahead and we know it's not going to be easy - but easy is boring anyway."