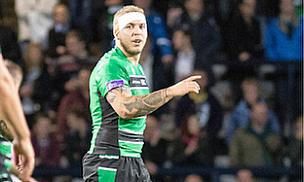 Chris Walker, the 22-year old Leeds Carnegie back-rower, former England Under 20s Captain and player tipped for big things in the English game has another accomplishment to add to his already impressive career – playing for Leeds alongside his younger brother Jack.

Chris, born and bred in Keighley, Yorkshire, joined the county’s figurehead club early in his own career and debuted in the LV= Cup against Llanelli Scarlets way back in the 2010-11 season.

After impressing in his first few opportunities Chris secured his place in the first team the following season.

His brother Jack, who is just 17 years old, is following in Chris’s footsteps in more ways than one:

The hooker made his Carnegie first team debut last year against Bristol, whilst already playing for his country’s under 16’s side.

Jack’s own career has propelled even further this year with a call-up to the England Under 20s squad for their Six Nations tournament that is currently ongoing.

Talking Rugby Union’s Austin Halewood caught up with the two brothers to ask them about their individual careers, plans and ambitions for the future and their experiences of playing together.

To begin, with Leeds enjoying a fruitful season in the Championship, currently second in the league, Chris explained how his own personal season was going:

“Obviously as a team we are sitting in a good position at the moment; but from a personal point of view it’s been slightly frustrating.

“I think it’s always going to be frustrating when there is that level of competition within a team and especially for us in the back row. We’ve got some good players in there and some good ones coming in.

“I’m hoping over the next couple of weeks to get a good opportunity in there, though, and when that comes I just need to make sure I take it.

Carnegie are currently second in the league with 57 points, four behind Bristol who are top and then just one ahead of closest rivals Rotherham in third.

“It’s definitely going to be a close end of the season,” Chris explained, “I think there’s about five teams at the moment who are all going to be there-or-there-abouts come the end, but there are only four playoff places...

“As the season goes on the pressure is certain to mount up. I think when actually look at the sides: Bristol who everyone is talking about, whether it’s who they’re signing or what money they’re spending, it’s really going to come down to team cohesion.

“Hopefully we can be in that top four come the end, and from then on it’s just playoff rugby – you never know. There have been plenty of shocks in the past and there will be plenty more to come I’m sure.”

The club itself has been in the rugby news quite a lot recently with Chairman Sir Ian McGeechan proposing a name change to Yorkshire Carnegie, with county’s top teams coming together to one.

However, the view from within the camp is that the players haven’t really had much say in the plans…

“Sir Ian came to the club the other day just to explain what the plans are.

“He obviously has spoken to Yorkshire clubs to start with, Rotherham and Doncaster, and said ‘here is what we want to do’.

“From my understanding the idea is for all to join together as one and get a solid system in place. He said he had been over to New Zealand where they have done something with all feeding into one main club with great success.

“However, as players, the actual name change doesn’t really affect us as we are still in the same environment with the same players. To be honest… we didn’t have a say in it,” Chris laughed.

Walker, himself a born and bred Yorkshireman, has played the majority of his rugby within the county, moving through the age groups of both local sides, the county teams and then Leeds’s own academy sides.

“I think it was England Coach Stuart Lancaster who said once that the majority of young rugby talent is coming through from Yorkshire and another county, I think it might have been Somerset.

“Yorkshire is an actual rugby development ground: there are so many great players that have come out of it and I’m just aspiring to be like them and follow in those footsteps really.

“Living in Yorkshire and growing up in the county has been absolutely fantastic,” Chris continued, “I’ve got all the resources here, a lot of the best coaches and, I think, that ties well to the newly proposed name change of the club.

“Yorkshire Carnegie is clearly an aim to keep that all under one club in the county, where players can come up and hopefully make their way to playing Premiership rugby.”

Alongside his time in the county Chris has also played his rugby on an international scale, representing England at under 16s, 18s and then 20s level when he captained the side in the IRB Junior World Cup.

Chris explained that he has “had a lot of great experiences from his days with England, but no more so than singing my first national anthem as a young kid – that was very surreal.

“I’ll never forget all of those experiences, playing alongside some guys who have already gone on to do some great things in the game – it was a very special thing.

“The whole experience has put me in good stead, though, not just for my rugby but the rest of my life really: some of the lessons I have learnt around that time, in those different environments and how to deal with people has set me up fantastically.”

In relation to the junior World Cup, Chris said that the honour of captaining his country to such a big event was an incredible experience.

“Some of the boys I was leading then were all very big figures, which actually made my job a lot easier. We had a core leadership group there and to captain some of them boys, who have gone on to play for England now like Billy Vunipola and Jack Nowell it was absolutely fantastic – I couldn’t have asked for anything else.

“Being in South Africa as well, such an enormous rugby-playing country, was a real dream come true. I’ve never been sat in a press conference with about four different TV stations and a whole bunch of journos before – it was a different level, really.”

Last, but by no means least, Chris spoke about his experiences of playing alongside his brother jack for Leeds.

The younger hooker has followed in Chris’s footsteps with his first England U20s cap just a few weeks ago at 17.

“It’s absolutely great to have Jack playing for Leeds as well, I love training with my brother; we can do a lot of stuff when we read each other and I think I play a lot better when I’ve got Jack in the team alongside me.

“He’s obviously got a really bright future ahead of him; already he’s a lot better player than me and I think he will go on to achieve special things within the game.

“He deserves every success he gets!”

Finally, Chris explained that his main ambition for the future is “to get into the Premiership and play Premiership rugby.

“It would obviously be great to do that with Leeds, but my ambition has always been to play for England.

“I’ve had a lot of hiccups in the past already,” Chris joked, “but I think with an ambition like that you never stop dreaming really.

“I’ll always want to play for my country, I’m very patriotic, and that’s a very special goal for me.

“As soon as I lose that ambition, I might as well stop playing rugby, because that’s what fuels me; keeps me going – it’s what gets me up in a morning!”