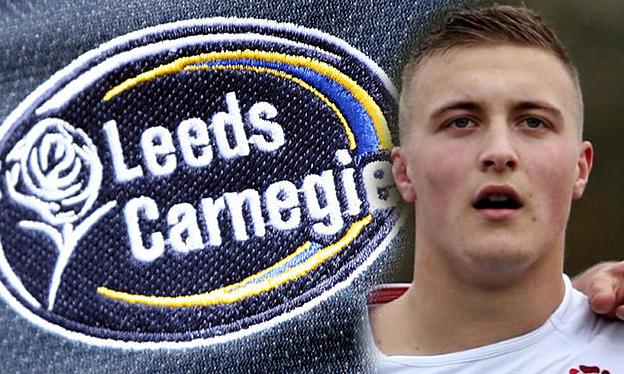 Following on from Talking Rugby Union’s exclusive with Leeds Carnegie and former England U20s Captain Chris Walker, Austin Halewood spoke to his younger brother and equally as talented rugby player Jack, in the second instalment of ‘a Tale of Two Brothers’.

There must be something in the water in Keighley, Yorkshire, as the small town has produced two of the county’s most promising emerging talent.

Jack, who is currently enjoying much success for Leeds Carnegie and in an England representative shirt, has followed in both his older brother Chris and father John’s footsteps with an already successful rugby career.

Still at just 17 years of age Jack has already made five appearances in the Championship for Leeds Carnegie’s first team, whilst juggling his studies at Prince Henry’s Grammar School in Yorkshire.

However, as if playing in adult rugby at such a young age wasn’t hard enough, Jack applies his trade in the front row at hooker.

After impressing in the Carnegie academy and for his county Jack was selected for the England U16s squad during the 2011-12 season.

From that point on his rugby career flew in rapid succession, with call-ups to the England U17s team, an U19s squad and most recently with a call-up to the famed England U20s side to help out their Junior 6 Nations campaign.

TRU’s Austin Halewood spoke to the young hooker and, firstly asked him how it was to play for the Leeds first team at such a young age:

“It was such a great honour when I first played in the side,” Jack began, “It’s an experience that I won’t forget.

“Playing with my brother Chris in the same team, at 17 obviously, was great.

“I found the step-up very physical and tough, but the experience was awesome.”

Jack then explained in his own words his run-up to getting into the first team which began “with me coming to Leeds when I was about 14 and I’ve been there with them since.

“Working my way up through the academy, really; working hard and just trying to learn as much as I could from all the players there.

“Then throughout the last pre-season that we have just had I was called up and involved in all of the first team training and luckily I had just been spotted from there and then given the chance to go and express myself and show what I can do on the pitch.”

Jack made his first appearance for Leeds in a British and Irish Cup game this season against Bristol – the high-flying, big-spending power of the RFU Championship this year, with a plethora of new signings and former Scotland coach Andy Robinson at the helm.

“I was on the bench but came on with about ten minutes left in the game, which was a great experience; especially against Bristol who are obviously such a good Championship side.

“Again it was tough and very physical but the experience was good.

“The following week I was then picked again and this time to start, away against Gala, which was down in York.

“To get my first start was great; it was good for the family with everyone being there too – it was a really good day.”

With a large portion of modern-day rugby dominated by the battle up-front and particularly power in the scrum, the fact Jack is already making his way through the ranks of the professional is a true testament to his character, physicality and determination.

“Obviously it’s pretty tough,” Jack revealed, “everyone’s a lot heavier and older than me, but I guess it’s just about asking the experienced boys - the guys who have been there and done it before - for help at times.

“Asking how they’ve coped with things and just trying to learn from them, really.

“I’m learning all the time from playing at that level and from the other players around me but I feel when I come onto the pitch that I have something to offer.

“I just try to come on and do my job as best I can really; as I would at my own age group.”

Leeds are enjoying a fruitful season in the RFU Championship, as they currently sit second in the league, 6 points behind leaders Bristol and just one point ahead of London Welsh in third.

“It’s really tight up at the top of the league, with only a few points separating so many teams,” jack confessed.

“Everyone has to be on top of their game and play well now in the run-in to the end of the season and the playoffs.”

Away from the club, as mentioned, Jack has a number of England representative shirts on display at home, with caps for a number of age groups.

The most notable of these being the Yorkshire hooker’s call-up to the famed U20s side at just 17, to face Scotland at Netherdale.

“It was a really good experience,” he said, “a lot of the boys there I have played with before and they were a massive help when I came into the team.

“The pace of the game was incredible – it was so fast and tough – but I loved every moment of it.”

Jack featured first against Scotland in an impressive 48 points to 15 victory and then featured again for the red rose against Ireland the week later in a 33-9 victory at Franklin’s Gardens.

The figure-head of age-group international rugby is the Junior IRB World Cup, which England are the current holders of; however, the Yorkshireman insists he is not thinking about that yet and is just trying to concentrate on his own game and play the best rugby he can for Leeds and England when he gets the chance.

Finally, Austin asked Jack about playing with his brother Chris for Leeds. Obviously thousands of siblings play sport in the same teams up and down the country, but to play alongside one another in the professional game, no matter what sport, is always a very special achievement…

“It’s great to play alongside Chris,” Jack began, “it’s difficult for the family at times, but when we’ve played together it’s been great and very special for all of them.

“It was a good chance to get the grandparents, uncles and aunties all down to watch the first game; it was an awesome feeling and a very special day.”