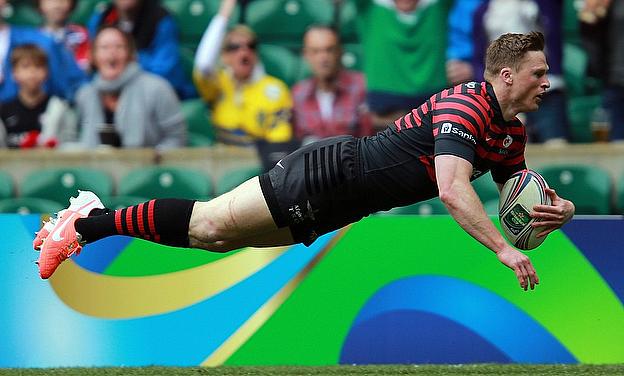 The Aviva Premiership leaders, who won 46-6, did not look back after building an 18-point interval advantage through a penalty try and touchdowns by wing Chris Ashton and fly-half Owen Farrell.

Ashton's second try after the break gave him a new record of 11 touchdowns in one European season, while substitutes Chris Wyles and Tim Streather also scored, and Saracens could even afford for Farrell to pass on goalkicking duties to full-back Alex Goode.

England number 10 Farrell had not practised while he recovered from a foot injury, and Goode slotted five conversions plus a penalty as Clermont were reduced to rubble.

And there could be few complaints from last season's beaten finalists Clermont, who were desperate to reach a second successive Heineken final in coach Vern Cotter's farewell season before he takes charge of the Scotland national team this summer.

Once Ashton pounced for his 10th Heineken try of the campaign, matching former Brive wing Sebastien Carrat's total when the French club were crowned European champions 17 years ago, Saracens never looked back.

A contentious penalty try followed, but when Farrell crossed eight minutes before half-time there was no way into the contest for a Clermont side that never left second gear.

The only disappointment for Saracens and tournament officials was a two-thirds empty Twickenham that begged the question why European Rugby Cup organisers did not take the game to nearby Madejski Stadium in Reading, among other alternative venues.

Goode landed the touchline conversion with his first kick after taking the tee from Farrell, and although Parra opened Clermont's account shortly afterwards, drama quickly ensued.

Clermont's Wales international full-back Lee Byrne saw an attempted defensive clearance partially charged down, and when fly-half Brock James challenged Bosch for possession in the air, it led to a penalty try.

Owens went to television match official Gareth Simmonds for guidance and the ruling was that James had deliberately nudged the ball behind the dead-ball line, preventing the probability of a try.

Goode added the extras for a second time and Clermont's sense of injustice continued as Owens ruled out a Benson Stanley score for crossing in midfield by Clermont flanker Damien Chouly.

The Clermont defence was stretched as Saracens moved possession wide and Ashton's inside pass found Farrell, who initially appeared to have knocked on before gathering a kind bounce, touching down and celebrating.

But video replays showed the ball bounced off Farrell's knee and a try was rightly awarded, with Goode following his conversion by kicking a penalty to put Saracens 24-6 ahead as half-time approached.

Clermont had it all to do after the break as they strived to reach a second successive Heineken final, but Saracens, in contrast, just had to preserve a healthy advantage.

And when out-of-favour England international Ashton sealed the deal 15 minutes from time, Saracens could think ahead to Cardiff after a one-sided contest few could have predicted.

They became the fifth English club to contest a Heineken final after Leicester, Bath, Northampton and Wasps before the tournament changes course next term and becomes the Rugby Champions Cup.

Clermont, meanwhile, could only reflect on a game that got away from them far too quickly, and Cotter will head to pastures new unquestionably without a sense of fulfilment.

And there was still time for Wyles and Streather to rub further salt into a gaping Clermont wound with Saracens' fifth and sixth tries that completed a stunning effort by England's current top club.