The ITM Cup 6 and 7: What happened to the Southland Stags? 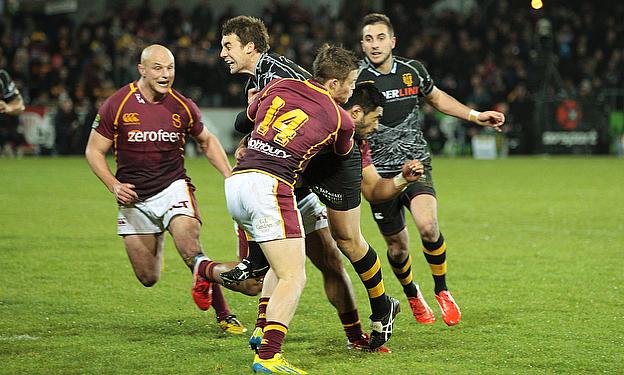 What happened to the Southland Stags?

The sixth round of the ITM Cup saw some enormous margins of victories and defeat combined with a lack of upsets. Otago's win over Waikato was really the only one that went against the thoughts of most tipsters.

Ironically, the closest game was between Canterbury and Counties Manukau which was one fixtures that most thought would be one sided.  The margins this week were so difficult to pick, with no bonus points for teams losing within seven points.

The complete run of results were as follows:

Canterbury – obviously, although they had one of their tougher matches against the physical Counties Manukau. Auckland, Taranaki and Tasman now look odds on to join Canterbury in the semi-finals.

Wellington still haven't won a game and sit miles from safety in the ITM Cup Premiership.  They are relegation bound barring a miracle.

Counties Manukau and Waikato are also struggling in the ITM Cup Premiership. One of the main questions from this season, though, is: what has happened to the Southland Stags? The proud rugby province now looks set to miss the ITM Cup Championship semi-finals which is hard to believe given that in the recent past they held the Ranfurly Shield twice and made the ITM Cup semi-finals before the split into Premiership and Championship.

Talking Rugby Union’s Scott Donaldson will address this question in a TRU case study, at the bottom of this piece.

First, though, looking ahead to the looming seventh round which is due to kick off on Wednesday, there is still plenty out there to be fought for.

On Wednesday Championship side North Harbour host the Premiership leaders Canterbury, in what will certainly be a difficult encounter.

Both of these teams have a double round and so it is difficult to know how they will go out the other end of the round, but it seems that most teams enjoy the momentum.

The main talking point with this fixture, though, is the fact that Canterbury has made 14 changes to their team to face North Harbour.  Canterbury is unbeaten in 2014 and should still win, but it is hard to tell what margin to expect since Canterbury has struggled to thrash teams when playing away from home against Counties Manukau and Otago.

There are some tough to pick matches with Bay Of Plenty hosting Northland, Taranaki at home to Auckland and Waikato hosting Manawatu.  Some other matches should be more lopsided with Canterbury hosting Southland and away to North Harbour while North Harbour hosts Hawke’s Bay.  Tasman should also be too strong for Otago, although Otago has been a recent bogey side for the blue and golds.

Scott Donaldson’s picks for Round 7:

Case Study: What has happened to the Stags?

Talking Rugby Union’s ‘man down under’ has been looking into the Southland Stags and asking the question, what has happened to the great provincial team of old…

If you rewind only five years ago, Southland won the Ranfurly Shield twice and even made the semi-finals of the first division, it kind of gave long suffering fans like myself hope and a chance to raise our expectations from one win a season to several wins a season and the fact the Stags would actually be able to compete finally with the big boys of New Zealand rugby like Auckland, Waikato, Wellington and even Canterbury.

It ends up that the ITM Cup and rugby in general is getting faster and players are required to run more.  I think this doesn't work in favour of the Southland Stags.  The Stags traditionally relied on their forward pack and played a slower style of game usually in bad Southland weather.

I also think that teams like Manawatu and Northland are playing some quality fast flowing footy at the moment, which makes it difficult for the Stags.  It is hard to know if the Stags should completely change their style like they have done under new coach Brad Mooar and they have scored some great long range tries, but it seems to have come at the expense of set piece dominance where Southland have traditionally excelled.

The Stags used to have good defence and be tough to beat at home. There are five current Southland Stags forwards who were part of that budget blowout team from five years ago in Jamie Mackintosh, Josh Bekhuis, Tim Boys, John Hardie and Elliot Dixon.  These guys have all played Super Rugby.  This makes me wonder what has changed when you consider that these and some of the other players in there are quality players.

The backline might have something to do with it.  The current Stags backline is full of new faces, but they are full of potential and look threatening, but we still aren't winning.  First five eighth Lima Sopoaga is a starting first five eighth at Super Rugby level and is a quality player.  The Stags miss one of the Cowans at halfback, while the rest of the backline looks dangerous, but looking back at that Stags team who won the Ranfurly Shield twice, the current team has no Super Rugby starting players in the backline besides Sopoaga.  Only Cardiff Vaega has a Super Rugby contract.  The interesting thing with the former Stags backline is that it didn't have many rockstars, but in guys like Robbie Robinson, James Wilson, Matt Saunders, Kenny Lynn, Glenn Horton and Kade Poki, it was a backline of Super Rugby quality, even though it was hardly lethal, but they were defensively sound.  I also neglected to include the name Mark Wells who I think deserved more kudos than he got.   Unfortunately that team was living outside their means.

I mention defence, because that has been the main problem with the Southland Stags 2014 ITM Cup campaign.  They have conceded over 30 points per game.  Their defence seems to passive and their line speed is lacking compared with other teams.  While the attack looks constantly threatening, I wonder if there is too much focus on attack to the detriment of defence.

It would be a shame to miss the ITM Cup Championship semi finals, but it is on the cards.  We were all given confidence after two wins to start with, but it ends up that they were over the worst two teams in the competition.  Since then the Stags have only one win over Northland which was exciting, but they have suffered disappointing losses to Otago, Manawatu, Tasman and Taranaki where the defence has been found wanting.

The current Stags team does seem to have a great culture, maybe they just need a season or two to gel?  Maybe they need some more local players?  There are so many potential reasons for their lacklustre 2014 season.

I think they need a quality tighthead prop and hooker who could then boost the Highlanders squad.  It is also hard to know how many seasons to give young players new to ITM Cup before you have to discard them?  This team has a good mix of youth and experience, so hopefully they gel sooner rather than later.  They probably have to win two games to guarantee an ITM Cup semi finals spot, so the season isn't over yet, but given that their remaining games include Canterbury, Counties and Hawkes Bay, it could be a tall order!

Being in my mid thirties I remember the days of Eion Crossan and Simon Culhane kicking us to victory in the second division, only for the Stags to only win one game in the first division and get relegated again, so in some ways we shouldn't be surprised seeing the Stags struggling in the ITM Cup Championship in 2014.

What do you think has happened to the Southland Stags and what can be done to fix their 2014 ITM Cup Championship campaign?