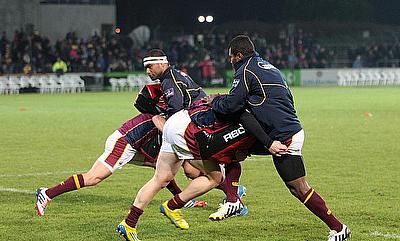 With Bay Of Plenty claiming their first win over Southland since 2011 earlier on today, here is Talking Rugby Union’s preview of the rest of the action in Week Three of the ITM Cup as well as a look back at Week Two.

Tasman are currently top of the Premiership Division after they made it two bonus point wins from two after a 34-13 victory over Bay of Plenty last Friday.

It was an ill-disciplined affair as referee Nick Braint had to make sure he put a lid on proceedings and was called into action 10 minutes into the match as he sinbinned Tasman prop Ross Geldenhuys for stamping.

It was a disjointed first half with the highlight being the try from Tasman winger Mitchell Scott after being set clear thanks to superb pass by Kieron Fonotia.  Bay came back into the match after the break, but it was a try from Fonotia and a Marty Banks conversion which made the result safe for the hosts before Pete Samu scored the bonus point try with seconds remaining.

In terms of their opponents tomorrow, Manawatu were left frustrated as they came so close to beating Waikato, but ended up losing 28-21 last week. I don’t think anyone would’ve predicated that scoreline when the home side were 18-0 down after 20 minutes as Manawatu were starved of possession in the first quarter of the match.

But, Manawatu fought their way back into the contest thanks to a lack of discipline from Waikato. They went down to 13 men and Manawatu took advantage with two very nice tries and when Nathan Tudreu crossed with seven minutes remaining, the pendulum had swung towards the Green Machine. However, Waikato recomposed themselves and stayed strong in defence to deny Manawatu the win.

So, Tasman have made a 100 per cent start to the 2015 ITM Cup and are certainly one of the favourites to go all the way this season. You can’t really look past them this weekend when they take on the new boys Manawatu. Saying that, the visitors have put in two excellent performances since their return to the Premiership and they currently sit 6th in the table. Their lineout and their work at the breakdown needs to improve against Tasman if they are to get anything from their game this week.

Counties pushed Canterbury all the way but couldn’t find that all important break-through as they lost 20-15 at the AMI Stadium last Sunday. The Steelers actually scored one more try then Canterbury in Christchurch with Jared Page and Sam Vaka going over. They were 14-5 down at the start of the second-half, but struggled to keep on the coattails of Canterbury.

As for Hawke’s Bay, they took a while to click into gear against Otago, but when they did they dominated the game to win 39-22 with All Blacks full-back Isarel Dagg scoring a hat-trick.

The Magpies scored 22 points in just over 10 minutes in this contest and they did lead 10-5 at half-time. Otago reduced the gap to two points, but dropped the kick-off and that was an invitation for Hawke’s Bay to run riot.

The visitors went on to score four tries in 12 minutes with Dagg being the star of the show with the hat-trick, but in truth he put in a very professional performance without being spectacular.

In terms of this weekend, Counties can go top of the Premiership with a win, whilst Hawke’s Bay really did send a message out to Wellington that it will be between those two teams for promotion back to the Premiership.

Their first half against Otago wasn’t the best as basic errors haunted them, but their second half-display was brilliant.  They top the Championship, but I think Counties may just edge this contest.

Auckland will probably win matches much easier than they did against Taranaki last week, but they did topple the defending ITM Cup Champions 30-24.

Auckland had the majority of the ball and it was left to 18 year-old centre Rieko Ioane to seal the bonus point for the hosts after a sensational 50m break in the final minute of the match.

Charles Piutau played with plenty of flair as did Ben Lam and George Moala with both Lam and Moala scoring tries. Piutau and Moala were making their debuts as were Ioosie Edwards and Simon Hickey but it was lock Liaki Moli who impressed the most.

Canterbury held on against Counties last week for their second win of this ITM Cup campaign. They led 6-5 at half-time thanks to another accurate display with the boot from Tom Taylor and when captain and Number Eight Luke Whitelock scored just after half-time, it looked like the hosts were in complete control.

However, Counties fought back, but Canterbury saw out the game and now occupy 2nd place in the Premiership.

This weekend’s clash between Auckland and Canterbury will be an intriguing contest and certainly is the marquee fixture of Week Three. Auckland sit 3rd and two points behind Canterbury and both sides have the opportunity to go top of the Premiership. It will be close, but I am going for Auckland.

Like we have just stated, the current champions Taranaki were beaten by Auckland last week and they could not get a lot going for them early on in the game despite having a strong pack and a handy looking back line. Rieko Ioane scored in the final minute for Auckland to seal a bonus point, but before then, Tarnaraki were certainly posing a threat.

Captain Charlie Ngatai intercepted and scored a try to keep the gap at four points for much of the second period.  Last year's ITM Cup player of the year and fringe All Black Seta Tamanivalu came on after half-time for Taranaki but received few opportunities and left the ball behind for the Ioane to pounce and put the game beyond the Taranaki.

If two defeats from two weren’t bad enough for the defending champions, they have also lost their captain James Marshall to injury for the rest of the season with a broken toe.

As for Otago, they were right in the contest against Hawke’s Bay when the score was 10-5 at half-time and they nearly scored right at the start of the second half, but had to settle for a penalty. That really was as good as it got for them as they were then trounced by Hawke’s Bay in the second half and this young Otago side were prone to errors and lacked a clinical edge in the final third.

Otago may struggle further this season and without a win so far this season and 0 points to their name season, it’s hard to look past Taranaki for this match on Saturday. This could be the perfect fixture for Taranaki to kick start their campaign as they currently sit bottom of the Premiership.

Wellington made it two wins from two in the Championship as they thumped North Harbour 43-0 in Albany last week.

The Lions roared into life straight from the first whistle as tries from Shaun Treeby, Joe Hill and Vaea Fifita put them in the driving seat. A penalty try was also awarded before the break and Wellington sealed the bonus point in first 40 minutes of this contest.

Wellington continued its dominance in the second-half, with Fifita crossing for his second try and Tomasi Alosio scoring on debut.

All Black Cory Jane put in a strong performance as he bids for a Rugby World Cup place as he fashioned chances throughout the game.

In terms of Northland, they went down to Southland 27-18 in Whangarei last week. It was 10-10 at half-time, but tries from Kieran Moffat and Lolohea Loco saw the Stags take charge of this encounter.

Kurt Davies scored for Northland to set a platform up for a comeback, but All Black fly-half Lima Sopoaga slotted over a penalty on the siren to end the hopes of Northland picking up any points from the match.

Northland prop Matt Talease has also been suspended for three weeks after a dangerous charge on Tim Boys that that happened on full-time this game.

As for the game this weekend, Wellington will be looking to return to the top of the Championship whilst Northland will want to avoid propping up the division come Sunday evening.  These are two sides with contrasting formand for me it could be a tough night for Northland.

Bay of Plenty bounced back from defeat against Tasman to secure their first win in four years against Southland this morning. They won 26-10 at Mount Manuganui and moved third in the Championship with this win.

All Black Sam Cane was excellent for Bay and the highlights of their victory were two stunning long range tries in the second-half from Te Rangi Fraser and Chase Tiatia.

In terms of Waikato, they were made to work hard against Manawatu last week, but they just about deserved their victory.

They were excellent in the first 20 minutes and that was aided by All Blacks Liam Messam and Tawere Kerr-Barlow who were tremendous. Their youngsters Damian McKenzie, Anton Lienert-Brown and in particular 18-year-old Shaun Stevenson impressed with Stevenson scoring a sensational try proving that he has a bright future ahead of him.

They lost their discipline in the second half with Jordan Payne & Kerr-Barlow both being yellow-carded which allowed Manawatu back into the game, but they stood tall in defence to clinch the victory.

Bay of Plenty were competitive against Tasman and this win against Southland is the perfect preparation for their game on Sunday v Waikato. I still think the visitors will be in buoyant mood after their win against Manuwatu so I think they may just edge this one.

After Southland picked up their first win of the ITM Cup against Northland last week, they were made to pay for poor discipline and lack of attacking rugby against Bay of Plenty today. Kieran Moffat could also  be heading for a spell on the side-lines after he was carried off the field with concussion.

North Harbour have had a torrid start to the new season and that thrashing at the hands of Wellington won’t have helped. It is hard to look past Southland picking up their second win of the season on Sunday.