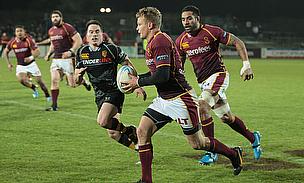 With the fourth round of the ITM Cup behind us, the competition is now in full swing as, once again, we find ourselves completely amerced in southern hemisphere rugby.

After four rounds of ITM action, the Premiership powerhouses Canterbury continued their race for the title with a fourth win from four attempts.

However, they are far from clear as the top of the Premiership table makes interesting reading for another close-run ITM season. Hot on their heels are Taranaki, with three wins, a draw and one loss, they sit one point behind the leaders on 18; followed by Tasman in third with 16.

Whereas in the Championship competition it is those men again, Manawatu, who have extended their lead ahead of OTago, Hawke’s Bay and Northland to 6 points.

Talking Rugby Union’s man ‘Down Under’, Scott Donaldson, brings you all the latest reaction and results from the ITM Cup:

The fourth round of the competition saw most of the favourites win for a change and the margins were far closer than the previous rounds with six bonus points for teams finishing within seven points.  Only Manawatu and Taranaki secured big wins and these were actually not as large as margins in previous rounds.

So what did we learn from ITM Cup Round 4?

Having two games in a round can actually be a good thing.  We learned this with Taranaki recently as it can help a team build momentum.  Manawatu utilised this in ITM Cup Round 4 with two wins.

There was definitely a catch-up logic similar to video games in Round 4.  Teams like Wellington, Tasman, Otago and Hawke's Bay started strongly, but their opponents came back at them.  Auckland's win over Wellington was an extreme case of this.

Fans of ITM Cup teams will be left with no finger nails following so many nail biting finishes decided in the final play of the game.

Otago showed how to play against Canterbury.  Get two props injured so that the game goes to golden oldies scrums!

Hawke's Bay and Counties Manukau looked flat this week and it shows the hangover effect of the Ranfurly Shield.

The race for the ITM Cup semi-finals are taking shape.  In the ITM Cup Premiership it looks like Canterbury, Taranaki, Tasman and Auckland are heading for the semi-finals.

In the ITM Cup Championship, Manawatu, Hawke's Bay, Otago and either surprise package Northland or Southland should be in the semi-finals, although the order is yet to be determined.

I think that some of the ITM Cup Championship teams are playing better than the ITM Cup Premiership teams.  Teams like Manawatu, Hawke's Bay and Otago wouldn't look out of place in the Premiership.

Canterbury are still hot, but cooled down a bit against Otago.  Taranaki and Manawatu were the form teams of ITM Cup Round 4.  Tasman also still looks hot.

What has happened to the Stags after such a promising start?  Wellington almost went from zero to hero at the weekend.  Bay of Plenty and North Harbour look destined for the cellar of the championship, while Waikato will battle Wellington and Counties Manukau for relegation in the Premiership.

Should the Chiefs be worried that three of their teams are struggling?  No, because they now have the in-form Taranaki in their franchise.