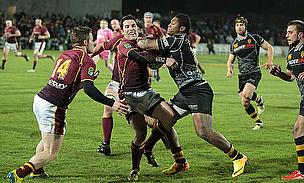 Who are you tipping to win the semi-finals?
©Scott Donaldson

The ITM Cup 2014 is here already, we have seen 14 teams in action over 69 matches. Interestingly in this competition, eight of the 14 teams make the semi-finals of either the Premiership or Championship.

The results from nine rounds of the ITM Cup make for interesting reading and probably frustrated the hell out of tipsters who thought they did well to tip a winner, only to find them missing the margin by 20 points.

Even astute tipsters like myself are prone to being wrong. Last week for example, I picked narrow wins at home for the better ranked Taranaki and Tasman teams, only to be denied by Canterbury and Counties Manukau. A late try to both home teams would have seen me clean up most conferences, but alas, it wasn’t to be.

Traditionally, both Auckland and Canterbury have dominated New Zealand provincial rugby, in a strange twist in 2014, it is perennial battlers Taranaki and newly promoted Tasman that have home advantage for the semi-finals, but are they used to winning the big games?

I think that while both Taranaki and Tasman easily won the corresponding matches earlier this season, expect at least one of these semi-finals to be closer, or even an upset, if you can call it that.

Picking home teams to win both semi-finals is potentially safe, but I can potentially see Canterbury tipping over Tasman. Canterbury’s win over Taranaki last weekend will have given them confidence and that could be dangerous for Tasman who lost last weekend to Counties.

In the other match, expect Taranaki to win comfortably, although it is hard to know if Taranaki can go all the way, simply because they may get stage fright.

In the ITM Cup Championship Manawatu and Hawkes Bay should be too strong. I am picking a big win for Hawkes Bay as they have the ability to thrash teams and although Northland have been good this season, their recent form has been patchy.

Manawatu will have their work cut out more for them against the Stags who have shown glimpses of their potential in a recent draw with Hawkes Bay and a win against Canterbury. They have some classy players with enough experience to give Manawatu a fright.

So if you can take anything away from ITM Cup 2014 regular season, it is that in an average round of nine games, there will be three upsets, three bonus points for teams finishing within seven points and five wins for home teams.

The problems with this attitude are that if three games finished with margins of seven points or less, then some of the margins in the other six games would have to be big to drag the average for the round to approximately 16 points.

Round 8 was a prime example of an irregular round with the closest match being a 14 point win to Counties in a cold Invercargill and there was an average winning margin of 24 points.

Are semi-finals any different from regular season?

Semi-finals over the past two years have been very high scoring in the ITM Cup as the conditions are usually better in October.

There aren’t usually many upsets in the semi-finals or finals, but there are usually some big margins, so that is something to consider.

Although, what is an upset? Going into this season Wellington would have been a good pick to make the final, but alas, they didn’t win a game until ITM Cup Round 9, while traditionally, Taranaki and Tasman would be considered underdogs when hosting Auckland and Canterbury.

Get your picks in for the first game, but it could be wise to wait for the teams to be named.

Your strategy depends on where you are positioned in your tipping competition. It is better not to pick upsets in every game.  Instead, I would go for a strategy involving one upset, probably Canterbury over Tasman and some relatively large margins in the Taranaki vs Auckland, and Hawkes Bay vs Northland games. Manawatu should beat Southland, but it probably won’t be a thrashing.