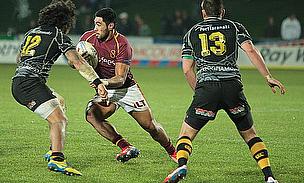 New Zealand deny Australia at the last
ITM Cup semi-finals 2014 - Will you be watching?
ITM Cup round 9 review - Rugby upsets
ITM Cup Round 9 - can the All Blacks influence the final round?

If you were in New Zealand over the weekend you were witnessing some stunning 80-minute games of rugby - both in the Bledisloe Cup clash and the ITM Cup semi-finals.

You would also have seen the All Blacks demonstrate once again that rugby requires a never-give-up attitude plus a belief and confidence in your team-mates.

If you were in Australia you probably felt robbed and concerned that your team lost its game management; the fact that minutes after the whistle it was announced that the Wallabies had lost their coach must have made rugby union fans wonder what was going on.

Many in the northern hemisphere will have watched on TV and enjoyed the addition of the ITM Cup to their rugby viewing schedule. The semi-finals were exciting with three matches having tight finishes, while there was something strange at seeing Canterbury knocked out at such an early stage. All four home teams won which restores your faith in the finals format.

TalkingRugbyUnion's Scott Donaldson looked at the games from the footy tipsters perspective.

Most tipsters picked the first three winners, with Hawke's Bay, Manawatu and Taranaki winning in three cliffhangers, but the Tasman vs Canterbury game split the tipsters and was crucial.

58 per cent of tipsters picked Tasman, while the others are either Canterbury fans, keep thinking Canterbury is the team which dominated the last decade and know how to win finals footy, or were simply desperate to catch the leaders in their conference.

Unfortunately this backfired with the four home teams winning and those who picked these results laughing all the way to the bank with a Grand Slam Bonus Point, which is a bit generous really!

There are now only two games left. The good thing for people needing a miracle is that both of the finals are tough to pick, with all four teams a genuine chance of winning their respective titles.

This means that an away team could lift the title for 2014, although both home teams will be favourites after winning the regular season game between the two teams.

It is funny not seeing a major city in the ITM Cup Premiership final, with good money available at the start of the season for provincial teams, Taranaki and Tasman. Hawke's Bay were favourites to win the ITM Cup Championship and are the Ranfurly Shield holders.

Manawatu will host the final and are surprise packages with Southland, Otago and Bay of Plenty more favoured to take the title than the Turbos.

It is interesting seeing the differences between the way these finalists got to the top with Hawke's Bay and Taranaki to an extent bringing in more imported players, while Manawatu and Tasman have plenty of home based players.