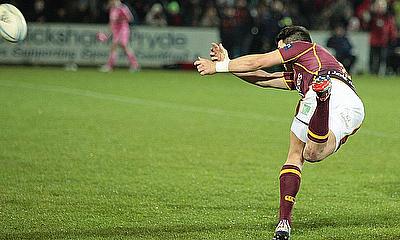 Taranaki claimed their first win in the 2015 ITM Cup this week as they beat Counties Manukau to get Week Four’s action underway. Talking Rugby Union previews the rest of the fixtures from this round as well as a look back at Week Three.

Manawatu will be bitterly disappointed to have lost 41-21 last week to Tasman. They started the game brightly after Kayne Hammington went over to open the scoring and when referee Glenn Jackson awarded them a penalty try and showed the yellow card to Shane Christie, the Turbos had the upper-hand. However, they failed to take advantage as ill-discipline let them down.

In terms of Canterbury, they ended Auckland’s 19-match unbeaten run at Eden Park as they won 27-21. It is a great achievement for Canterbury and they have three wins from three in this season’s ITM Cup. Winger Johnny McNicholl was the man on form with two excellent individual tries and Canterbury now look ahead to this week’s clash away at Manawatu.

The home side sit bottom of the Premiership, but have played well in games this season. They are still yet to put in a solid 80 minute performance so far as we have seen the best of them in patches. Canterbury are now only a point behind leaders Tasman and will be looking to continue their 100 per cent record this weekend. With Canterbury lying in second place and with the chance to go top, I will have to go with the visitors in this fixture.

Otago came from behind to beat ITM Cup champions Taranaki 34-27 last week. They overturned a 22-6 halftime deficit to win in New Plymouth.

This was their first win over Taranaki in seven years and they rallied back thanks to four second half tries, with scrum-half Kaide Whiting scoring the winner right on full time after a TMO decision.

As for their visitors, Tasman, they remain unbeaten in 2015 after a comfortable 41-21 win over Manawatu in Blenheim last week.

Another four-try bonus point victory has cemented the Makos at the top of the Premiership and they look tough to beat with fly-half Marty Banks kicking superbly from the tee. He kicked five penalties and three conversions which shows he is pushing even harder for a place in Super Rugby.

Another player who put down a marker for more Super Rugby playing time was Peter Samu who scored two impressive tries against Manawatu.

Otago sit mid-table in the Championship with just that one win to their name this season. They will be boosted by that sensational victory against the current champions last week, but even with that confidence flowing through their side, you can’t look past Tasman who have been unstoppable so far this season.

Waikato cruised past Bay of Plenty last week with a resounding 43-10 win to go third in the ITM Cup Premiership.

This was their biggest margin of victory in nearly three years and tries from Brad Weber – who scored a brace - Michael Mayhew, Jordan Payne, Zane Kapeli and James Tucker made sure of that.

They made far too many first-half mistakes which ultimately cost them in this tight encounter. They tried to find a way through the Canterbury defence in the final stages of the game, but it was too little too late.

They may have felt hard done by in the first-half when Canterbury’s Daniel Lienert-Brown went over, despite looking like he was in front of kicker Patrick Osbourne.

However, even though Auckland may feel that this decision went against them, they conceded their third intercepted try of the season of the season when Ryan Crotty pounced on the error.

Both of these sides will want to make up some ground this weekend on the top two and Auckland may turn to Bryce Heem and George Moala for attacking flair as they were a handful against Canterbury. This will be one of the closest games of the weekend and is extremely difficult to call, but I will say the visitors may just edge this clash.

Southland will be disappointed that they were beaten 26-25 in Invercargill by North Harbour and even more frustrated that they let a 15-point halftime advantage slip.

Their concentration and discipline let them down in the second half after a first period which they dominated. Southland exposed the North Harbour defence with centre and Hurricanes player Willis Halaholo leading the charge, but after that Southland faded away.

As for their opponents this week, high-fliers Wellington travel to the deep south still unbeaten as they coasted to a 29-0 win over Northland four days ago at the Westpac Stadium.

The hosts led 17-0 at the break with wingers Wes Goosen and Joe Hill grabbing the tries.

Ardie Savea got the ball rolling in the second when he crossed and the Lions secured their four-try bonus point through Jackson Garden-Bachop.

Wellington have now made it two clean sheets in a row so can they do it again this weekend? Their hosts sit in fourth place with just one win to their name, but the way Wellington have begun this ITM Cup Championship campaign suggests their time in this division isn’t going to last too long.

Counties struggled with the ball in hand and their discipline at the ECOLight Stadium as they failed to convert their opportunities.

In terms of North Harbour, they are finally on the board after a narrow 26-25 win over Southland last week.

They completed a remarkable comeback when fly-half Daniel Halangahu pinged over his sixth goal of the evening to seal the victory in Invercargill.

This was the first time North Harbour have beaten Southland in eight years and their forwards were excellent throughout. They were led by Hayden Triggs, who was playing his 100th game in this competition.

Both Hawke’s Bay and North Harbour will be gearing up for the Ranfurly Shield challenge this weekend. The home side are looking to make it 20 points from 20 to stay top of the Championship while North Harbour will be heading into this game with a bit more belief after that win against Southland.

However, like Wellington, you can’t bet against Hawke’s Bay in this division at the moment.

Northland head into this encounter on the back of a 29-0 defeat away at Wellington and now sit rock bottom of the Championship division. They were never in the contest and now host the current holders of the ITM Cup, Taranaki, this weekend.

Taranaki went into Week 4 without a win and the champions were really struggling. After throwing away a 22-6 lead last week against Otago, they ended up losing the match 34-27.

However, they ended a seven game winless run this morning with a 17-10 win over Counties Manukau and have now moved to fourth in the table.

The game was level at half-time in a sodden New Plymouth thanks to two penalties as both sides struggled to keep the ball in hand due to the conditions.

The hosts looked to their territory and kicking game in the second-half and it paid off as Chiefs centre Sera Tamanivalu crossed.

Counties were still struggling with their handling and that gave Taranaki the possession they needed to score a second try as Kurt Baker went over the line. They then turned their attention to defending and stood strong to see out their first win of this campaign.

Despite Taranaki’s poor start to this season, this has to be an away as Northland have found life difficult so far in the Championship. They are the only side in the ITM Cup with 0 points.

Counties were sloppy in play last week against Hawke’s Bay and were again this morning as they lost to Taranaki. They now lie sixth in the Premiership, just one point clear of the winless Manawatu.

Their best spell of the game against Taranaki came when they were 10-3 down, but basic handling errors let them down once more.

There was the faintest of hope for Counties when Ma’ama Vaipulu crossed 10 minutes from time to cut Taranaki’s lead to seven points, but Counties could not break down the home side’s defence.

As for Bay of Plenty, they began Week Three with a win over Southland, but were then were humbled by Waikato.

They actually got the first points in that 43-10 defeat as Dan Hollinshead kicked a penalty, but after that it was backs to the wall for them and their second defeat of the season.

Counties have struggled since their opening day win over Manuwatu and are slowly dropping down the table. Bay of Plenty’s defeat to Otago may show the gulf in class between the Premiership and the Championship or may just be a blip for BoP. This will be another close contest and I fancy Bay of Plenty to sneak this and capitalise on a Counties side short of confidence at the minute.

My Pick: Bay of Plenty