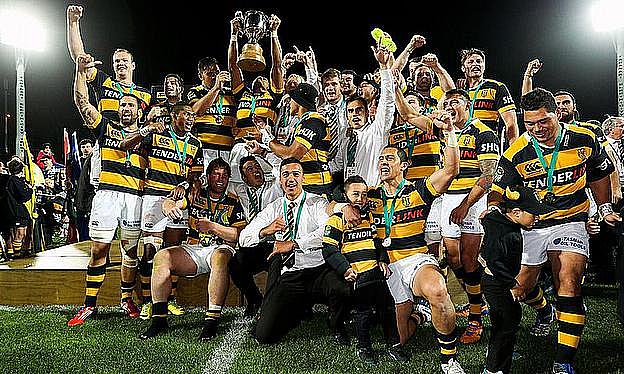 We are now just two days away from the start of the 2015 ITM Cup and many of us are hoping for a repeat of the fairy tale year of 2014 in this season’s competition.

It is fair to say that seeing Taranaki and Manawatu lift the Premiership and Championship was a surprise, but that unpredictability made the 2014 tournament a superb spectacle.

In addition to this, Manawatu who many tipsters thought would be nowhere near the semi-finals, went on to win the Championship with ease. They cruised past the likes of their former Central Vikings partners, Hawke's Bay and other solid teams like Southland, Otago, Northland, Bay of Plenty and North Harbour.

With The ITM Cup happening at the same time as the Rugby World Cup, it is likely that it will be in the shadow of all the drama and tension that unfolds in the UK.

However, there will still be plenty of interest domestically, with the ITM Cup starting before the World Cup.

What the ITM Cup has produced in recent campaigns is a pool of superb young talent. A number of New Zealand players will be missing from the competition this season so a lot of ITM Cup teams will be crossing their fingers not only on the health of players, but also if they make Steve Hansen's All Blacks Rugby World Cup squad.

It isn’t just New Zealand though. Teams are set to lose players to other nations. Normally there are players in the ITM Cup who play for Pacific Island nations and it isn't really sustainable for unions to contract players for only a few games, so these players will either have limited or no involvement in the ITM Cup 2015.

There are also players like Wales’ Gareth Anscombe, Scotland’s John Hardie and Ireland’s Jared Payne who have gone over to play in Europe and make it to the Rugby World Cup.

They are all excellent Super Rugby players and they highlight the next tier of players in New Zealand rugby, so it will be a shame that this tier of players are unavailable as they usually shine in the ITM Cup.

The flip side to this is that it gives talent which is yet to be unearthed the chance to shine and make a name for themselves in the ITM Cup and in turn, put their name forward for Super Rugby selection for the following season.

Who are you picking to win the ITM Cup Premiership and Championship in 2015?

One of the things that made the 2014 ITM Cup was the fact that teams like Taranaki and Tasman didn’t have the recognisable All Blacks in their teams whereas Canterbury and Wellington did.

However, they did have good Super Rugby ability. It is of the opinion that the New Zealand players in the squads are usually a hindrance rather than an advantage to a team.

It is still a mystery as to how some teams can fit under the salary cap like they do, with the likes of Taranaki and Tasman having some impressive looking squads.

Teams will be expecting Taranaki to challenge this season so they will be aware of the threat they pose. The current champions will know that the likes of Auckland (who have looked strong in pre-season) along with Tasman, Canterbury and Counties will be in with a shot.  It is hard to know how Manawatu and Waikato will fare, but the absence of so many international players will make for a more even competition.

In terms of the ITM Cup Championship, it is hard to look past Wellington for glory, while while Hawke's Bay have a team with too much talent to not be a threat.

Lima Sopoaga impressed in the Rugby Championship for the All Blacks and seems to be be ahead of Beauden Barrett and Colin Slade for the 10 shirt, but with the likes of Dan Carter in front of him at fly-half, the Stags wil be hoping to have Sopoaga for all of the ITM Cup.

Otago look strong and the likes of Northland, North Harbour and Bay of Plenty will look to replicate Manawatu’s performance of 2014.

Who are you picking to win the ITM Cup Premiership and Championship?

My picks are Tasman to go from bridesmaid to ITM Cup Premiership winning team, as they have an experienced squad of good Super Rugby players now.

Wellington should return to the ITM Cup Premiership by winning the Championship.