The ITM Races on: Round 6 Preview 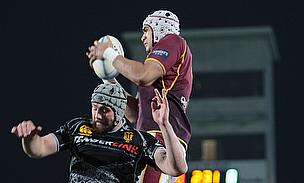 The ITM Races on: Round 6 Preview

The fifth round of the ITM Cup started with a real bang last week as two shock results sent waves through both divisions of the competition.

Will the Canterbury train continue to race towards the Premiership after another win in the fifth round leaving them still unbeaten? However, the same cannot be said for lowly Wellington, as the once powerful force are still in search of their first win.

The Championship competition still remains the most fruitful, though, with Manawatu, Northland, Hawke’s Bay and Southland all locked within three points of each other.

Firstly, looking back to last week’s fifth round, not many people expected Hawke's Bay to thrash Otago by so many points, but there were also some incredibly tight matches with Taranaki, Southland and Waikato winning their fixtures by the smallest of margins. With Tasman certainly kicking themselves (if only they kicked the ball into touch) against Taranaki.

Talking Rugby Union’s man ‘Down Under’, Scott Donaldson, brings you his thoughts and all the latest reaction from the ITM Cup:

“Interestingly, the Ranfurly Shield really does affect results.  Counties Manukau realised earlier this season that home games are tough as the challengers are fired up, while away games tend to have a hangover effect.

“Even, post Ranfurly Shield wins, both Counties and Hawkes Bay have been tipped over away from home.”

So who was hot in the ITM Cup last week?

“Canterbury thrashed Wellington and it seems that, barring any major catastrophe, they will finish the top-dogs joining Auckland, Taranaki and Tasman in the finals.

“Taranaki are still running hot, although it should be Tasman on the hot-list after their match.  Hawke's Bay are looking impressive, while Northland have also been on fire.  Auckland are getting into gear and should make the ITM Cup semi-finals.”

And how about who is not?

“Wellington still hasn't won a game this season and seem like relegation candidates, while Counties Manukau would give anything to get back to their 2013 form.

“Otago hit the wall in the fifth round – maybe the Ranfurly Shield challenge was actually detrimental in the long run.

“Also, the Bay of Plenty Steamers are still off the pace and simply don't seem to have the calibre required to dominate the Championship.”

Looking ahead to this coming round, the sixth, we have Southland hosting Tasman on Wednesday. Both sides have a double round of fixtures this week, though, so how they will fair by the end is anyone’s guess… however, it does seem that, this year, teams have thrived on momentum.

“The main talking point with this game is the strange scenario where former All Blacks Jimmy Cowan and Andrew Hore are playing.  But Cowan will be in Tasman colours after the Southland centurion was surplus to requirements in Southland, while Andrew Hore has been called in as injury cover at hooker and will be on the bench following injuries to Rutledge and Tuapati.

“This is the 100th ITM Cup game for Josh Bekhuis the Southland, Highlanders and new Blues lock.

“There are some potential upsets in this round with games to watch being Otago hosting Waikato.  Otago were embarrassed by both Northland and Hawke’s Bay last week and so watch for them to come out firing.

“Northland has a good chance against Taranaki, while Tasman haven’t been as convincing recently and must be careful away against Southland and Wellington.

“Southland also has a chance against Manawatu after hitting some good form against Northland.”

Who are you picking to win ITM Cup Round 6 matches?