Matt Challinor Exclusive: "We can be a match for anybody on our day" 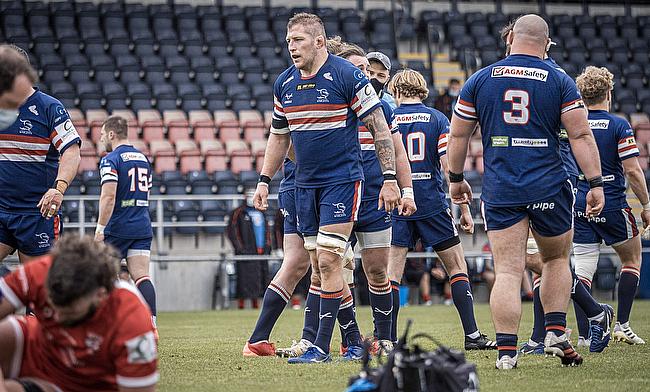 Test of title credentials as Doncaster Knights take on Saracens
Ealing and Cornish set for cracker while Sarries welcome back England stars
George Nott Exclusive: “We are starting to live up to our potential”
Sebastian de Chaves Exclusive: Success on the field will make us Austin’s team

Sometimes in sport it all just clicks.

A multitude of moving parts slot in together to create something special.

It’s perhaps jumping the gun slightly to say that the current Doncaster Knights vintage fall into that category just yet, given we are only a handful of games into this the strangest of bitesize seasons. But there’s no shame in waxing lyrical about the run they find themselves on.

Heading into this campaign they were unfancied, unheralded, now halfway through they are unflappable, unbeaten and still somewhat under the radar.

Five wins from as many games sees the South Yorkshire side sitting second in the table having overcome a quintet of challengers.

It’s their finest ever start to a Championship season, and their best since 2013/14’s successful Nat 1 Campaign, where they bounced back instantly from relegation to the third tier the year prior.

That is just one chapter of the club’s storied last decade, which has also seen them lose out in a British & Irish Cup Final in 2014/15, share a game a piece with Bristol in a two-legged Championship playoff final with Bristol in 2015/16, ultimately missing out on a Premiership place on aggregate, reach the playoff Semi-Finals again the year following, as well as flirting with the wrong end of the table in recent seasons, plus oh so much more.

One man who has been through it all, firmly establishing himself as a cornerstone of the club and indeed the Championship itself is the unmistakeable Matt Challinor.

Side named for Sunday’s big one.

??sleeps till we welcome @Saracens to Castle Park

Do NOT miss out, order the live stream today ?? https://t.co/5m0IjiseT3

A constant leading light, the 37-year-old second-row has amassed over 250 appearances for the Knights since joining from Rotherham back in 2010, sharing the many ups and downs, whilst amassing a collection of plaudits and accolades as large as his 6'5" frame along the way.

Now into the final stretch of his days as a Doncaster player, having confirmed this season to be his last before moving into the working world whilst re-joining Rotherham, Matt is enjoying an Indian Summer to his career, starting all but one game this season and playing a key role in his side’s recent successes.

In a year which has seen much change at the club, including a brand new coaching ticket and a squad overhaul, Challinor has remained a long-term constant, so can rightfully assess and enjoy this, his last dance, where clearly something has clicked.

“With all the changes in the Summer I think the squad is a lot younger and hungrier, the calibre of player that Steve Boden is fetching in means everyone knows that they’re there for a year or two to put a performance in for the club and look to kick on, that hasn’t always been the case in the past,” Challinor says.

"I’m not saying players have been coming to the end of the career but they’ve been quite happy and relaxed whilst all the young lads now are really ambitious and really hungry, that’s the main difference.

“I’ve been really impressed with the coaches, I’ve known Bodes for 20 plus years and in our younger days you didn’t really think he’d be the gaffer as DOR, but he’s really good at the role. He’s got great knowledge and the way he sees the games I’ve been really impressed. Same with Fordy (Joe Ford), same with Nathan Smith, they’re young as coaches they’re hungry and want to succeed, and you can tell that’s coming out in every session.

“We didn’t talk about setting any goals, we just said that we’re really fortunate to be in this position, we got together as a group and said whatever happens we’re gonna enjoy it, we’re gonna give it the best we’ve got, made a pact and it seems to be working.”

They may have felt fortunate to be in a position to return to play, but fortune certainly doesn’t cover the position Doncaster find themselves in the table.

Wins over Ampthill, Coventry, Hartpury and Jersey, plus that epic where they beat the man who beat the man, in victory over Pirates, means play-off goals are being set by fans and plaudits whether they like it or not.

Challinor, of course, refers to Saracens who after an opening day defeat down in Penzance have responded with a trio of commanding bonus point wins, providing the perfect platform for their visit to Doncaster.

From the outside looking in it is set to be a monumental match-up for the Knights, Castle Park welcoming the likes of the Vunipolas, Jamie George, Maro Itoje, Owen Farrell and Elliot Daly for what could be an historic day.

Peek inside the Doncaster camp and they’re preparing for just another game of course, and certainly not looking past it at the weeks ahead, though it can be agreed that having a side like Sarries in the league is quite something.

“Playing the calibre of player and the potential XV that they could put out, it’s a chance for the lads to go and compare themselves, and as daft as it sounds not much pressure is on you, just go out and enjoy yourself, if we were to get beat convincingly everyone would expect it, if not we get some plaudits so I think it’s a win win for us and I’m sure that’s the same for every team in the Championship.

“Boring as it sounds it is a case of taking it game by game, looking back at the Pirates game, I’m not saying they overlooked us but I’m sure they had eyes on their Ealing game. In this league when you play you can’t really look too far ahead because you’ll come unstuck, that’s what we keep talking about and hopefully we’re not daft enough to fall into that trap.

“It’s always been a strange league, but more so now that you’ve got teams who are part time training after work at night and you’ve got lads who are professional who’ve been playing in the Six Nations.”

Peering too far into the immediate future may be wisely avoided, but reflecting on Challinor’s outstanding Knights career should always been encouraged.

There have been standout moments and events which will live long in the memory, but perhaps the most remarkable occurrence is the sheer consistency, both in number of appearances and level of performance.

“I’ve always liked training, I’m sure if you talk to any team mates hopefully they’ll say I do train hard, I look after myself, I’ve played a lot of games where I don’t think I’ve ever been fully fit,you’ve always got something niggly, but I think it’s just a bit of a mindset to get on with it," Challinor says.

"I suppose if I was in a different position where you lose a yard of pace and it was really critical it might be different, but for me nobody’s gonna know the difference. A positive mindset and being lucky, I think that’s what I put it down to really.”

It’s hard to imagine a Doncaster side and indeed a Championship lacking Matt, but the club won’t be rid of him quite so easily.

“Whenever I get the chance I’ll get back there, I’d love to go and watch and have a few beers with the supporters." Challinor says.

“It will be my club forever now, next year I’ve got a job full time and I’m going back to Rotherham so I’ll be playing on my Saturdays, but when I can I’ll definitely be going to watch Doncaster Academy play on a Wednesday.”

Given what has occurred over the past year it’s perhaps as good a time as any to step outside of professional rugby and forge a different career path in project management whilst still playing semi-professionally.

Before that though there are at least five more Knights appearances up for grabs, before perhaps a final two game extension.

“It’s something that I’ve thought about for a long time but whilst you’re fit and you’re getting picked regularly it’s always a case of ‘next year, next year’ but the time has just come," Challinor says. "So far I’ve been involved in every game, started nearly them all so I think it’s better to go out whilst you’re still offering something instead of being a bit of a pain.

“I love playing and at the moment I’m still able to do everything that I want to having been lucky with injuries, I just think it’s a good time to transition, I’m 37 and I can get the best of both for a few years, play a bit of rugby on a Saturday at a half decent standard and get into the real world.

“Covid probably made me think twice at some points we were a month away from not having a job at all and I’ve got a young family so time to rely less on rugby financially.

?? This week’s #ChampClubsPod guests are a lovely pair of hookers, with two different @Champrugby journeys ??

?? Listen & Watch on Podbean, Apple Podcasts, Spotify and Youtube via the link in our profile.

“When I was at Leeds years ago Stuart Lancaster insisted that you went and got an apprenticeship or you went to university, at the time it was a bit of a ball ache but I’m grateful now that that was the case.

“I’ve agreed to start at the beginning of June , hopefully that’ll get delayed by a few weeks meaning we’ll be in the playoffs. I’m quite looking forward to it, it’s always been a worry in the last 5-10 years that in rugby you’re only an injury away or a loss of form from it being over and I’ve only been on 1 year contracts for the last god knows how,”

Back to the now briefly and this final Challinor chapter of the Doncaster story still requires a conclusion.

That won’t quite be written until at least the final day of the season where they’ll face Ealing, but may start being pencilled in off the back of the next result.

The bookies price Doncaster up to as much as 35/1 to take Saracens scalp, which not only tells its own story of Sarries might, but also just how much this current crop of Knights should be celebrated.

“I think the calibre of player and depth of the squad means we can be a match for anybody on our day, but taking every game as it comes it wouldn’t surprise me if we managed a few more upsets along the way." Challinor says.

“I do fancy our chances every time we go on the pitch at the moment with the players we’ve got.

I think Saracens could win all of their games now but miss out on a few bonus points so still be unsure with a game to go, it’s good and it’s a great advert for the Championship.”

Those last words ring particularly true, it is a great advert for the Championship, as are Doncaster and of course, as is the one and only Matt Challinor.