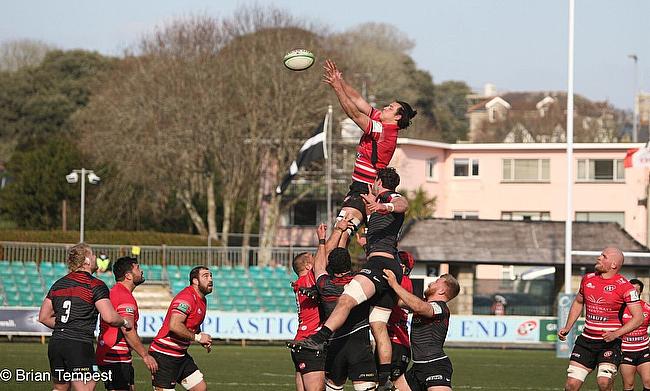 Let’s get back to business then!

The first fallow week is in the bank, the Easter eggs have been gorged and the Championship has plenty of moving parts to begin fitting into place.

Round 4 was another edge of your seat blockbuster, which left us on a cliff hanger at both ends of the table so expect even more fireworks in Round 5.

Friday night dust-ups are off the menu for a while so Saturday serves up another triple-header before two exciting games on Sunday. Here’s what’s in store:

Hard luck if you wanted to be eased back into the action this weekend as this should be an absolute corker to mark the second phase of the season.

It is first vs third as table-topping Ealing visit Cornish Pirates, who despite slipping up at Doncaster last time out, still harbour serious ambitions to reach the play-off final. If that is to happen, then this one could well be a dress rehearsal.

What a way to kick off Round 5 ??@CornishPirates1 ran out 30-10 winners the last time they faced @ealingtfrugby in the Greene King IPA Championship.

Who are you backing to win on Saturday? pic.twitter.com/EQWX5CYE5w

It may have provided a chance to refresh and recover, but given the choice, neither side would have likely opted for a week off.

Ealing are absolutely flying and will want to keep that huge momentum rolling into what should be their biggest test so far. Pirates, meanwhile, will want a chance to right the wrongs from the only blot on this season’s copybook.

Pirates’ famed home record fits the bill again for this particular fixture as the Trailfinders have managed just one win in their last five league visits to the Mennaye and their Cornish counterparts are nearing 18 months unbeaten on their home patch.

With 236 points and 35 tries from their opening four games, Ealing will certainly bring the ammunition for an attempted onslaught. This one should be a belter.

Yes, you’re reading that correctly. No need to adjust your eyes, Jersey are hosting Doncaster in Doncaster.

The Reds are at least due a couple of games back on the island before the season is out, having conceded home advantage here and in Round 3 due to travel restrictions.

Venue and nuances aside, this is an intriguing match up as the unbeaten Knights take on a Jersey side who finally hit their straps before the break thanks to an opening win of the campaign against Bedford Blues.

Doncaster are on a roll having won each of their first four matches, but it hasn’t all been plain sailing as they’ve had to seriously scrap for each victory. That should provide huge encouragement, though, as there are still gears for this Knights side to go through as they look to strengthen their claim to hijack the play-off picture.

Jersey have seen improvements week on week as they contend with their homes from home. The win at Bedford in Round 3 should have quelled any concerns of their capabilities to pick up results and several recent additions will have bolstered their resources.

The Castle Park spoils have been shared fairly evenly between these two in recent years, with the last couple of meetings at the venue resulting in wide winning margins either way.

Doncaster Knights are on a crusade and will go all out to slay another foe, but on a weekend where former Reds player Nick Campbell makes his professional boxing debut, Jersey will be looking to land the perfect counter punch to add to Round 4’s success.

Saturday’s action finishes with two sides desperate to get back to winning ways.

Hartpury won on the opening day, but since then, they and Nottingham have lost their last three, suffering some points difference damage along the way.

Losing heavily to Ealing this season is an experience shared by both teams and Hartpury will want to quickly move on from their chastening 75-19 drubbing at the hands of the leaders.

Nottingham will be keen to build on the spirited display they produced against Coventry two weeks ago as the Midlands club battled back to earn a try bonus point.

The hosts are one of the division’s entertainers. Only Ealing and Saracens have managed more than their 14 tries, but no side has let in more than the 20 Pury have conceded. Nottingham have shipped 18 in one game less.

Nottingham confirmed this week Head Coach Neil Fowkes will depart the club at the end of the season, giving them added motivation to finish the season strongly and provide a positive send off for a Green and Whites legend who has devoted the majority of his life to the club.

All six Championship fixtures between the sides since Hartpury’s promotion from National One have gone the way of the hosts, with the last three all being settled by seven points or less.

Despite not playing a ‘competitive’ fixture against one another since way back in 2000, these clubs are no strangers having regularly competed in pre-season over recent years as well as forging a strong link that has seen numerous Sarries players gain experience at the Blues.

The alumni includes the likes of Owen Farrell, Jackson Wray and Mako Vunipola, who all spent time on loan at Bedford before going on to excel for Sarries.

With the Six Nations finally concluded, Saracens begin to welcome back more of their England contingent as they ramp up their promotion push in a week where Farrell was confirmed as the new club captain.

Saracens is proud to announce the new leader of our Wolfpack, @owen_faz ?? #StrongerTogether ????

Having won their last two comfortably, they also have Nick Tompkins back amongst their ranks after his loan at the Dragons concluded, meaning Sarries stocks are well and truly bolstered for the weeks ahead.

This may also be the first of quickly dissipating British and Irish Lions auditions ahead of the summer for those Saracens players in the mix.

Despite having only won one of their opening four matches, Bedford have dazzled in spells. They have already won the Championship Try of the Week on two occasions and with their Northampton dual-reg boys bedding in further with each passing round, the Blues are an exciting prospect.

What must come next are more positive results and what better place to try and find one of those before their bye week, but they will be searching for their first competitive win over Saracens since 1993.

Round 5’s action concludes as Ampthill make the short(ish) trip up to Coventry for a tussle between two sides who managed bonus point wins in their most recent respective fixtures.

It was against Nottingham that each secured those maximum hauls, and both were made to work for the entire contest to eventually put their opponents away.

Sat in mid-table as they approach the halfway point of the season, a win here for either side would be a hugely positive marker towards the campaigns latter stages.

Cov have brought in Bath pair Tom Doughty and Will Butt on dual-registration to cover injuries to Suva Ma’asi and Rob Stevenson, meaning the West Country duo have big boots to fill.

The A’s will have gone three weeks without a game by the time this one rolls around as their bye week came right before the break so they will be raring to go come Sunday afternoon.

Ampthill edged the only previous Championship meeting between the two sides last January, courtesy of a penalty with the last kick of the game, so this one could be another nail biter.

Richmond extend their break this week, meaning they will be well-rested when they return with a trip to Bedford in Round 6.

Having spent a year out of the game, it may not be deemed the most necessary recovery, but it will give them some added time together having suffered a defeat against Saracens last time out.

Despite the heavy scoreline, they competed admirably and will be fairly pleased with their return so far.