George Nott Exclusive: “We are starting to live up to our potential” 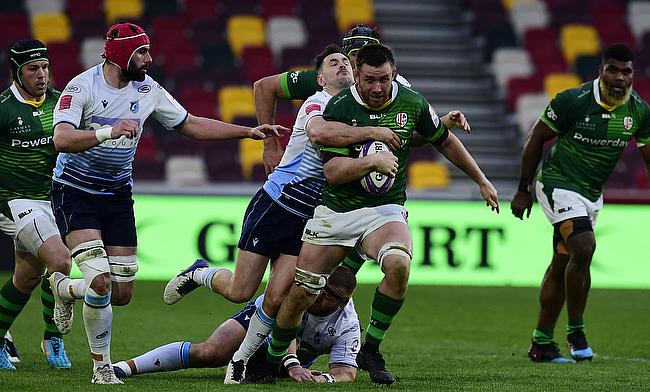 George Nott will have European glory on his mind this week.

The 25-year-old was born in North Wales and he might even call the ‘south’ his home having moved to London Irish in 2019, but his roots really lie in the northwest of England.

The Exiles forward was schooled in Chester and nurtured in the Sale Sharks academy, but his passion for arguably the biggest institution in the region - Manchester United - still burns bright despite 200 miles separating the Brentford Community Stadium and ‘The Theatre of Dreams.’

“It would have been nice if the final was at Old Trafford…you couldn’t get more local for me!” Nott laughs as we reflect on his highly successful campaign with England during the 2016 U20 World Championships, which were hosted across Manchester.

His beloved Red Devils will play in a European quarter-final of their own on Thursday with Ole Gunnar Solskjaer’s side eyeing up the Europa League, but 24 hours later, Nott will be fully focused on his day job as the Exiles aim to reach the last four of the Challenge Cup.

It might not have been on the same scale as United’s extraordinary fightback in the 1999 Champions League final - when the aforementioned Solskjaer stabbed home the winner in the 93rd-minute v Bayern Munich - but Irish’s exploits in last weekend’s European tie against Cardiff Blues were arguably as dramatic.

Reduced to 14 men and having recovered from 12 points down in the final 10 minutes, a drop-goal from Jarrod Evans looked to have snatched victory for the Blues, only for Curtis Rona to cross in the last play of the game to secure a remarkable win.

Irish now head into their quarter-final clash with Bath having won four of their last six games - including a recent 36-33 triumph over the Blue, Black and White - and Nott admits confidence is oozing through the veins at Hazelwood.

“I think this season, we are starting to live up to our potential,” says Nott. “We’ve always known we’ve had the capabilities to pull out these results and beat these top teams like we have been doing. We have always had the belief, but it is just getting back that respect from others.

“I think people are slowly starting to respect us now as a good team. You look back to the game against Bath [at the end of March], that is an example of that [the high standards Irish are setting]. We got five points at home against a massive team like Bath, but we were gutted because of the way we let them back into the game and let them have two points.

“We are hungry to get five points and let the other teams get zero. That is our goal in these games now. London Irish in the past might have been going into some games just trying to get a losing bonus point, but I can’t remember last having that goal in a game.”

Last week’s amazing comeback against Cardiff Blues saw Irish translate their domestic form on to the European stage. Declan Kidney’s side currently sit sixth in the Gallagher Premiership standings, just five points outside the top four, and their style of rugby has impressed many onlookers this season.

Having arrived in the summer of 2019 alongside some big-name players such as Nick Phipps, Sean O’Brien and Paddy Jackson, Nott is now part of an Irish squad that seemingly has the perfect blend of international experience and bubbling homegrown talent.

The ‘homegrown’ aspect is something that has stood out for the Exiles this term. The English trio of Tom Parton, Ollie Hassell-Collins and Ben Loader, for example, have been electric and from Nott’s point of view, the promotion of youth is something he can relate to.

Having developed out on loan at his local club Chester as well as Fylde in the National Leagues during his time with Sale, the 25-year-old knows how big the pool of talent is below the glittering lights of Premiership and European rugby.

Nott is also aware of how fortunate he has been to continue playing the sport during an unprecedented year: “We know how lucky we are at the moment,” he says. “For months now, there has only been six games on a weekend across the whole country before the Championship came back so you just can’t take it for granted.

Huge congratulations to @GeorgeNott1 Man of the Match in last night's semi final England U20 against South Africa!!! #MOTM

“We go into an environment where we are able to mingle with our mates. Yes, we are still social distancing around the workplace, but just being able to leave the house and go into that kind of environment where we can have that banter with our friends means we are so lucky to be in that position.

“What has been amazing to see is clubs up and running again. Rugby is quite a small world as well so I know a lot of players in the Championship and the National Leagues. Everyone has been itching for it. To take it away from them for such a long time, boys are lost. They don’t know what to do with themselves so I can’t wait till they are back fully up and running. I go back to Chester a lot and I can’t wait to see the boys back playing and doing what they love.”

It was only five years ago that Nott was ‘one of the boys’ plying his trade for Chester at Hare Lane in National Two North. Since then, he has experienced success with England U20s, tasted the Premiership and Europe with Sale and he is now part of an exciting era at London Irish.

But the powerful forward believes without his time in the National Leagues, his path may not have led him to the top flight and a shot at a European semi-final this weekend: “The hardest ever transition for me was as an 18-year-old suddenly going into senior rugby because I was a very light player as well.

“From suddenly going from playing against teenagers to adults, at whatever level that might be, it is a massive shock to the system. You hear some players talking about how they don’t want to go on loan and how it is below them because they are a professional rugby player, but at that stage, I was a National Two player. I wasn’t better than that level so I think it is right that players go on loan. It is not just about learning; it is playing at the level that you are.”

And right now, Nott is playing in a high-level London Irish side who travel to Bath on Friday night, having scored the joint-most tries in the Challenge Cup so far this season (14).

The club will now be targeting their first semi-final in this competition since 2006 and if the Exiles and Manchester United can do the double this week, European glory will still be firmly on the mind of George Nott.