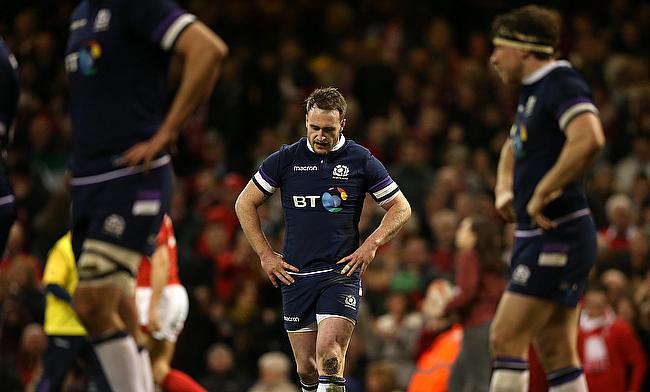 Scotland winger Sean Maitland reckons the upcoming Six Nations encounter against France at BT Murrayfield Stadium on Sunday will be a must-win game for both the sides.

The Dark Blues opened their campaign with a 34-7 defeat to Wales and are positioned fifth in the table while France were edged out by Ireland 13-15 following a last-gasp drop goal kick from Johnny Sexton.

Scotland conceded four tries in the game at Principality Stadium while managed a solitary try in the closing stage with Pete Horne crossing over.

Another defeat on Sunday would mean Scotland's chances to win their first championship title since 1999 will be all but over and Maitland urged the team to pick themselves up ahead of the crucial clash.

“They were very unlucky [on France's defeat to Ireland]. If you take a spanking or lose like that, I’m not sure how you’d like to lose – those boys looked like they were hurting after the game.

“They’re in a similar situation to us, both picked up losses first up and we can’t afford to lose a second game.”

He added: “We know this is a really important game. The good thing for us is we’re playing at home, our form over the last two years has been really good playing at home.

The 29-year-old is poised to return to the Scotland line-up following an injury to Byron McGuigan and is now hoping to make most of the chance to remain in contention among the highly competitive group of players.

“When you’re in the team you want to be have competition and over the last few years there has always been competition in the back three with me, Tommy (Seymour), Viss (Tim Visser) and now Byron has come on the scene,” he said.

“He was absolutely class in the Australia game and that’s what Gregor said, he deserved another chance.

“It’s a shame what happened to Byron with his hamstring, but there’s still a lot more competition with Lee Jones who played really well against the All Blacks. You need that to drive yourself.”