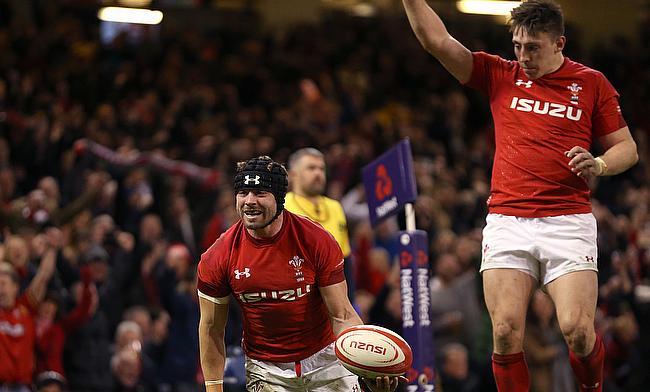 Leigh Halfpenny contributed with 24 points including two tries as Wales kick-started their Six Nations 2018 campaign with a 34-7 win over Scotland at Principality Stadium on Saturday.

The win was also Wales' 50th win under head coach Warren Gatland and their 50th win in the expanded Six Nations tournament.

Scotland had a chance to open their account early in the 2nd minute when Jonny Gray breached through the defence of Wales but could not quite go past the line. However, Gareth Davies led the charge after intercepting a pass from Ali Price to score the opening try in the 5th minute. Halfpenny added the conversion to make it 7-0.

Wales soon doubled their lead when Halfpenny went past the line in the 11th minute - his first try in 35 Tests spanned over five years - and with the extras added the scoreline remained 14-0 at the end of the first quarter.

Even though Scotland dominated the possession with Stuart Hogg and Finn Russell posing threat, they failed to make it count following a series of errors. The first half ended with Wales having a 14-0 lead.

Halfpenny further extended Wales' advantage with back to back penalties at the start of the second half and soon the fullback also crossed over in the 60th minute as Gatland's men looked in total control after scoring 24 unanswered points.

The bonus point for Wales came when Steff Evans dived past the line and with a trail of 34 points, Pete Horne provided some consolation for the Dark Blues with a 78th minute try that opened their account but Gregor Townsend's men were completely outplayed in the tournament opener.

Wales have taken the top position with five points after the opening day of the Six Nations 2018 campaign.