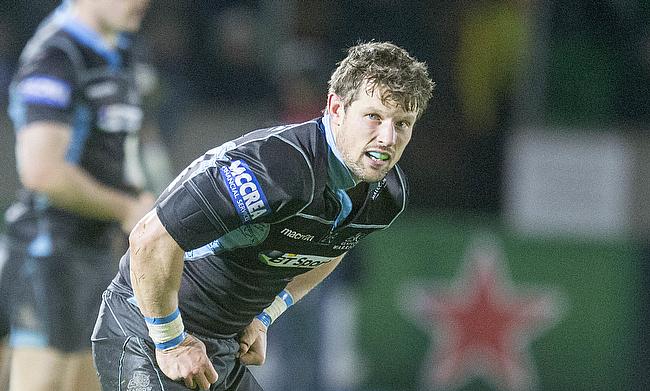 Scotland international Peter Horne has penned a new three-year deal with Glasgow Warriors that will keep him with the Pro 12 side until 2020.

The 27-year-old has made over 100 appearances for the Scotstoun outfit and was part of the squad that clinched the 2014/15 Pro 12 title during which he was named in the dream team of the season.

Having played his last game for Scotland against Georgia during the November Tests, Horne is currently undergoing a rehabilitation process from an ankle injury, which forced him to miss the ongoing Six Nations tournament.

Horne revealed that the decision to sign new contract was a straightforward decision especially with current Chiefs coach Dave Rennie taking in charge of Glasgow Warriors from next season.

"I've loved my time here and I love the club. I'm passionate about playing my rugby in Glasgow.

"When the club came to me it was a no-brainer. We're going places, which was summed up this year with us making the European Rugby Champions Cup quarter-finals for the first time.

"As soon as we signed up Dave Rennie for next season it made it an easy decision. When his name was mentioned it filled me with excitement as I've watched a lot of Super Rugby and the Chiefs are a great team. He plays a brilliant brand of rugby and it seems like all the players really play for him.

"I'm hungry to get better as a player and all the boys here are hungry to do better. I feel like I've played a big part over the last seven or eight years and it's a journey I want to continue."

Even though Mark Bennett, Josh Strauss and Gordon Reid have announced their exit from Glasgow Warriors at the end of this season, Stuart Hogg, Henry Pyrgos, Tommy Seymour and Tim Swinson along with Horne have extended their stay at the club while Stormers duo Huw Jones and Oliver Kebble will join the Scotland regional team as well.

Meanwhile, current Glasgow head coach Gregor Townsend, who is set to take the head coach role of Scotland in June praised Horne for his commitment.

"Peter is one of our hardest working players and epitomises what it means to be a Warrior, setting himself and others high standards in training every day.

"He deals with injuries and takes on new challenges with positive energy, which inspires everyone at the club.

"It's great news that he's staying in Glasgow for another three years."