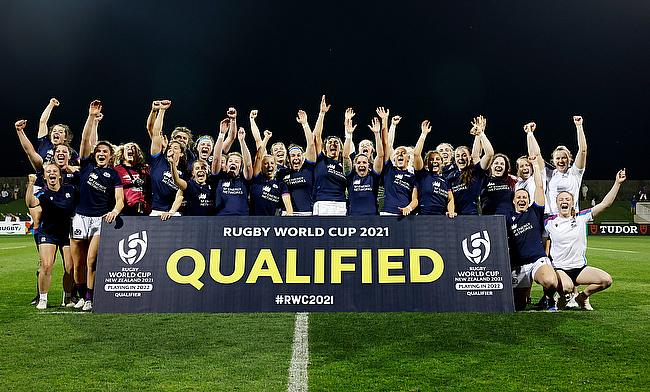 Scotland have qualified for the 2021 World Cup, which will take place this year in New Zealand
©World Rugby

Tommy Seymour Exclusive: “They are all phenomenal - they give Scotland a completely different set of weaponry"
Hot property Henry: Scottish speedster Jacob making his mark
Fiona Kennedy: 'To lead Oxford in the Varsity Match is an amazing opportunity'
New kids on the block: Introducing Scotland’s uncapped quartet

It is Tuesday now, but it would be fair to say that some of the Scotland women’s squad will still be in a daze after an amazing 24 hours on Friday and Saturday.

At 3pm UK time on Friday, 7pm where they were in Dubai, Bryan Easson’s charges kicked off their final Rugby World Cup 2021 (being played in 2022) qualifier against Columbia in The Sevens Stadium.

Given that before kick-off they were ninth in the world and Colombia were 25th, the Scots were firm favourites to progress to New Zealand later in the year, but they had to go out and do a professional job on the pitch - and they did just that.

Before the break, Law scored a converted try and Scotland were 28-3 up at the interval.

It was jubilation after the final whistle following the 59-3 triumph because it secured Scotland’s place at the ‘big dance’ for the first time since 2010.

The celebrations could not get too wild in the UAE though as just hours after that final whistle, the squad and support staff were on a flight back to Glasgow.

They landed at around 11.30am on Saturday and, bleary eyed - but smiling - were bussed straight to BT Murrayfield to watch Scotland versus France in the men’s Six Nations at 2.15pm.

Captain Rachel Malcolm and fellow member of the senior leadership group Helen Nelson presented the match ball ahead of the game and, at half-time, the whole squad were out on the pitch receiving applause from the 67,144 crowd alongside the successful Team GB Winter Olympic curling teams.

That was around 3pm on Saturday and it had been a mad 24 hours from Dubai to that moment, but one they will never forget.

Given that some of the players have been trying to get to a World Cup for nine years and some for six or seven, it will take some time for it all to sink in.

“We hope we have done Shib proud”

After beating Wales in the Six Nations back on February 24, 2017 - their first triumph since 2010 - it showed what Scotland were capable of and ever since then, this group have been striving to make it to the World Cup.

In truth, the journey probably goes back longer than that. Since the Scots lost out in a two-legged play-off to Spain in November 2016 which saw them miss out on the 2017 World Cup in Ireland, a large batch of the current squad have made it their main focus to make sure they get to the next one.

However, it was that 15-14 victory over Wales on a cold night that was the catalyst for what has come since and gave the squad a bit of belief that was sorely lacking previously.

Before the 2017 event qualifiers, Scotland had also failed to reach the World Cup in France in 2014 and the last few years have certainly not been without there ups and downs.

The head coaching baton has passed on from Shade Munro to Philip Doyle to Bryan Easson while results have not always gone the team’s way and the World Cup was shifted back a year because of the pandemic.

And in recent months, the players and coaching staff have been dealing with their toughest challenge of all, the passing away of squad member Siobhan Cattigan aged just 26 in late November.

Before the match on Friday, there was a poignant moment when hooker Lana Skeldon, the longest serving player in the group, laid a Scotland strip in memory of Cattigan in front of the team as they sang the anthem.

“It was something we talked about lots as a squad in the build-up,” an emotional Loughborough Lightning back-row Malcolm explained to TRU.

We wanted to pay our respects to Siobhan and we wanted her out there to finish the journey that she started with us.

“That’s what that signified. It was a really emotional moment for us as a team, but something really passionate that we wanted to do for the team and for Siobhan and for her family.”

All of the players had Cattigan’s nickname - Shib or Shibby - written on their wristbands and player of the match Louise McMillan referenced it in her post match interview, the second-row stating “we hope we have done Shib proud."

“We have put down a marker”

In seven months or so, Scotland will now be up against the hosts New Zealand (second in the world), Australia (fifth) and Wales (11th) in Pool A at the 12-team World Cup.

Before that, there is the little matter of a Six Nations which begins later this month and Malcolm said:  “The performance against Colombia was clinical and we have put down a marker. I think it’s something we’ll push on from now, now we’ve got momentum.”

Relive Friday's historic night in Dubai as we secured our place at the Rugby World Cup in New Zealand ??

And head coach Easson stated:  “I will plan accordingly where this group can go, we are going to be working hard.

“When you look back at where this group of players have come from in the last 18 months, they can go on and do that again and get better again.

“We are not going to a World Cup to make up the numbers, we are going there to compete and the levels have to go up - and can go up. We are a proud nation and we have proud players who want to go to a World Cup and show what they are all about.

“I just feel proud of these guys - they’ve been exceptional. A lot of them have been involved since the 2013 and 2017 World Cup qualifiers. There’s been a lot of ups and downs, so it’s pride that I feel for everyone and I know that we can get even better.”