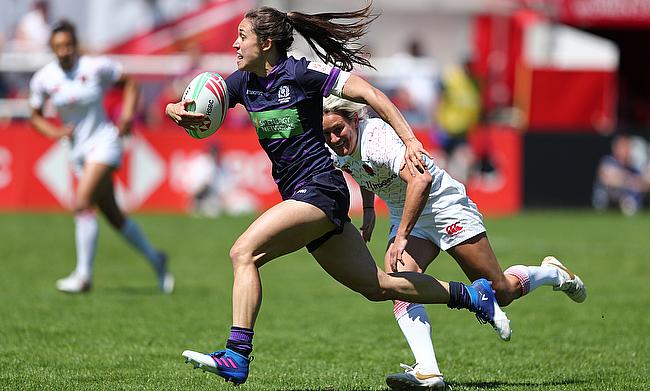 Loughborough programme can be ‘the best’ in Women’s rugby
Oz-some experience Down Under sets Scot Eilidh up nicely for Biarritz
'We have to believe and show no fear' - Scott Forrest
Leitch: 'I have been given loads of support and that has given me the opportunity to play for my country'

Great British swimmer Adam Peaty is one of the best athletes of his generation - and although he may not know it, he has helped to inspire a Scotland Women’s rugby star to hit new heights in her own career.

Rhona Lloyd, now 22, has been in and around the international set-up in both XVs and sevens since she was a teenager and while she has done well when available, a number of shoulder injuries have continued to blight her progress.

The most recent shoulder issue kept the winger out for 10 months in the end, but rather than get disheartened during her rehabilitation she used the time to take a step back, reflect on her exciting career to date and then put in the hard yards in the Loughborough University gym to take her to the next level.

And, as Edinburgh-born Lloyd explains, seeing the likes of Rio 2016 Men’s 100m breaststroke Olympic champion Peaty in that very same gym has made her realise that anything is possible and that time is on her side.

“The Lightning rugby squad that I have been training and playing with since I moved to Loughborough at the end of last summer is in the Tyrrells Premiership so there are loads of inspiring people in that group while when you are in the gym and Adam Peaty is on the squat rack beside you, well you almost have to double take,” she told TRU.

We caught up with @adam_peaty earlier this year on his training regime at Loughborough, which sets him up for world-record breaking swims. pic.twitter.com/vqVkk33iDZ

“It is just amazing seeing how athletes like that go about their business. I haven’t talked to him - that would be a bit nerve wracking - but it is just great to see people of that calibre using the same facilities as you.

“You can always pick up tips from just watching the top level athletes and I am also dong an internship with British Athletics so through that I get to work with Olympians and other brilliant athletes too and I just feel that I am surrounded by such a positive sporting environment.

“That has really helped me to re-focus and push myself to get even better because I know that my best years are to come.

“In April last year when I injured my shoulder, originally I thought I would be out for four months, but it ended up being 10 and I was just back in time for the Six Nations.

“It was so frustrating because sevens is the game that I love and over the last few years I have had quite a few shoulder injuries and that has forced me to miss quite a bit of sevens with Scotland.

“That is why I am really appreciating playing sevens this year because in the year that I did manage to play we were in the second tier of the Rugby Europe events and playing the likes of Moldova and Malta.”

Having begun her rehab in Scotland last summer alongside fellow international player Lisa Thomson who was nursing a similar injury, the move to Loughborough to study a masters in sports biomechanics has seen Lloyd get a new lease of life.

She came back just before the Six Nations and earned five appearances during the event in February and March to take her XVs caps running total up to 21.

Then came the Tyrrells semi-final loss to Harlequins with Loughborough Lightning before a trip to Hong Kong with Scotland Sevens.

That was in April for the World Sevens Series qualifier and although Scott Forrest’s team eventually lost out to Brazil in the final, it gave the players a real boost.

“We were obviously devastated at the end, but when we all took a step back and looked at it in the cold light of day we knew that the Hong Kong showing would give us confidence going forward,” Lloyd, who previously studied for a degree in biomedical science at Edinburgh University, said.

HUGE learning curve and incredibly inspiring weekend at Biarritz 7s. First invitational team to win on the 2018-2019 World Series! We’ve got so much more to give and I can’t wait to keep building with this team ?? #QueensChasingDreams #HappyPlace

“It showed us that we could step-up when it mattered most and I think made some of us realise what we are capable of as a group.”

Fast forward to earlier this month and Lloyd capped a brilliant individual showing at the World Sevens Series event in Biarritz, France by scoring her sixth try of the tournament to help Scotland end on a high with a win over Ireland to finish 11th.

Earlier in the day she had scored a try against the might of Fiji while, on day one, she bagged four tries as the Scots drew with England and lost to New Zealand and Russia.

It was the Scots first ever tournament at that level – as an ‘invitational’ side following last year’s Rugby Europe Grand Prix showings - and they certainly made their mark on the event in the Parc des Sports Aguilera.

Now they are getting ready for the Rugby Europe Grand Prix event in Marcoussis, France this coming weekend.

It will be followed up by another event in the Ukraine on July 20 and 21 and good results in these two tournaments would see them qualify for a return to Hong Kong next year.

“Biarritz was a great test for us all, but we came through it and there were two things that stood out for me,” Lloyd explained.

“On a personal level scoring a try against New Zealand was a dream come true and then as a team we became the first ever invitational side to win a World Sevens Series tie.

“That has left us buzzing ahead of our return to France this coming week in the Rugby Europe event.”

Getting the band back together

Sevens squads spend a lot of time together on the road and in between ties and this week Scotland player Megan Gaffney revealed that the squad have started their own band thanks to the promptings of Lloyd.

“I think more rehearsal time is required, but we are getting there and we are starting to produce originals as well, maybe it’ll be an album next!”

Whether or not the band make the big time remains to be seen, but Lloyd and co are certainly keen to make some noise on the pitch in Marcoussis which is near Paris.

“Personally I cannot wait to get out there and play again,” Lloyd said. As a team we are really building nicely and, having missed last summer, I am making up for lost time.”

For the upcoming event on Saturday and Sunday, there are four changes to the Scotland squad that went to Biarritz. Rachel McLachlan, Liz Musgrove and Louise McMillan come into the 12-strong group along with debutante Sarah Denholm.