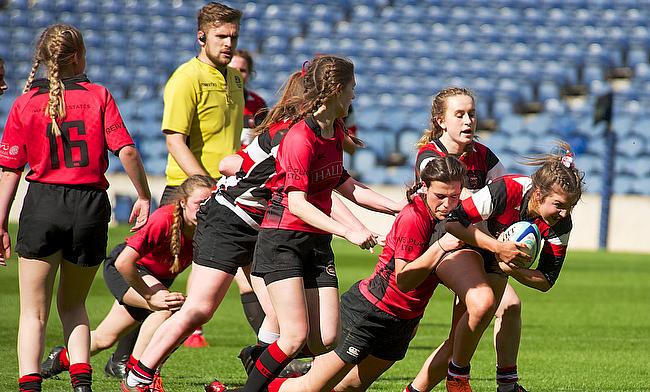 Why the ‘Phenomenal’ Allianz Premier 15s needs visibility
Vicky Fleetwood Exclusive: Global competition can create a brighter future for players
Fundraising effort in Eilidh’s memory is a success: 'She was simply the best team mate and friend'
Supporting the LGBTQ+ community in rugby: “It is about building knowledge, listening and understanding”

Ahead of any big sporting tournament, it is always exciting to see the new names who could go on to make their international debuts.

When Scotland head coach Bryan Easson named his 31-strong playing group last week for the Women’s Six Nations - which runs from April 3 to 24 - there were four uncapped players listed.

They were 20-year-old Stirling County back-row Evie Gallagher, her club mate Evie Wills (19) who is a stand-off/centre, fellow 19-year-old Shona Campbell from Edinburgh University who is a winger and 22-year-old Saracens centre Coreen Grant.

On the quartet, Easson told TRU: “They all deserve this opportunity.

“Evie Gallagher used to play in the midfield when she was younger. I say younger she is only 20 now! She has good distribution and is an exciting prospect.

“Evie Wills is a good distributor off left and right hand. She has been working on some kicking with [Scotland cap centurion] Chris Paterson on a weekly basis too.

“Shona played touch for Scotland and she has serious gas. She is really coachable and has taken on board everything that has been asked of her.

“And Coreen got a blue last year at Cambridge and she has been playing at Saracens. She hasn’t been playing down south this year because she came home to Edinburgh during lockdown, so she has been training with the homegrown players up here and that has been good.”

Growing up, Gallagher took part in a number of sports - basketball, eventing and horse riding for example - and transitioned from the backs to the forwards in her late teens.

The former Stirling High School pupil made her Scotland Sevens debut aged just 17 and Al Wilson, who has coached her at Stirling County, said: “Evie is a natural athlete.

“When she played in the minis at the club, she played on the wing because she was so quick with her step.

“In the under-15 team, she played mainly at centre before the transition started to the back-row when she was in the under-18s.

Find out more about two of the four uncapped members of the @Scotlandteam squad for the upcoming @Womens6Nations via my pieces for @TalkRugbyUnion from the archive:

“A background in the backs is really helpful for her because as well as doing the hard yards that back-rows do, she also has a nice touch on the ball and the eye for a gap and can be a good link player.”

Stuart Keys, who has also coached Gallagher at County, adds: “Evie was quiet growing up, but really competitive.

“She was always very quick and as she got older, you could tell that she had a good sports brain and liked playing for the team.

“As she went up into our age-grade teams at the club, she became a key performer and it is testament to her commitment and work ethic that she has got herself into the wider Scotland squad and will now be looking to win that first cap. If and when she does that, we will all be so proud at the club.”

Evie Wills: “She plays with real heart and determination”

Whilst at Dollar Academy, Wills played hockey to a good standard, but she also loved her rugby at Stirling County.

“She played everywhere in the backline growing up,” Wilson states. “Playing sevens, she played at scrum-half and she has played a lot at 10, a lot at 13 and at full-back as well.

“That gives her a good grasp of all of the positions in the backline and she has a good idea of where the space to attack is and is also good at putting teammates into space.”

Rob Storey, who has also coached Wills at County, adds: “She may be young, but she is not frightened to take on players who are bigger than her and more experienced and she plays with real heart.

“As a playmaker, she also has enough confidence to talk well to the players around her on her own team and make changes if things are not going well.

“She has a great skill set and that will only improve with her now being in and around the national squad - certainly a player to watch for the future.

“To have her and Evie Gallagher join the likes of Megan Kennedy, Siobhan Cattigan, Rachel Shankland and Rachel McLachlan representing Stirling County in the Scotland squad is exciting.”

Shona Campbell: “I reckon she could easily sidestep a player in a telephone box!”

Campbell played rugby for Montrose RFC growing up and, as Easson said, the former Dundee High pupil has played touch rugby for her country.

“Shona is one of the most exciting players we have seen in Scotland for a while,” Gordon Lyon, who has helped coach her at Edinburgh University, states.

“She came a bit later to the uni rugby team as she played netball and also touch and that was evident in her skillset. She is a very balanced runner and can find space like no other - I reckon she could easily sidestep a player in a telephone box!

“She is a very good communicator and the more she learns the systems and rugby jargon, the better she is getting. She understands team sports and the concepts of space - attacking it and closing it down - which makes her a valuable addition to any team and definitely a future leader.

“Shona is a very confident player and was happy to throw herself into uni rugby. Her multi-sports experience allowed her to blend in and become part of the uni squad very quickly.”

In December 201, she scored a stunning try and was named the player of the match as Cambridge won the women’s Varsity Match at Twickenham in dramatic fashion.

“Coreen is an intelligent player that knows the game and has the skills to match,” Anna Stodter, the former Scotland cap who coached her at Cambridge, said.

Her footwork means she can get around and through small gaps and she did just that for us with her amazing Twickenham try.

“She has that ability to change a game and I hope she’ll get the chance to show that on the international stage. Above all, Coreen is a humble team player and an all-round good human.”

Lisa Martin, the former Scotland skipper who plays with her at Saracens, adds: “Her balanced running skills come to the fore in broken play. She has an eye for the mismatches and gaps.

“Coreen has really bought into the Sarries values of work rate, honesty, discipline and humility over the past two seasons and has been training hard as part of the wider Saracens squad.”