Nelson: Playing alongside Red Roses has helped me become a leader for Scotland 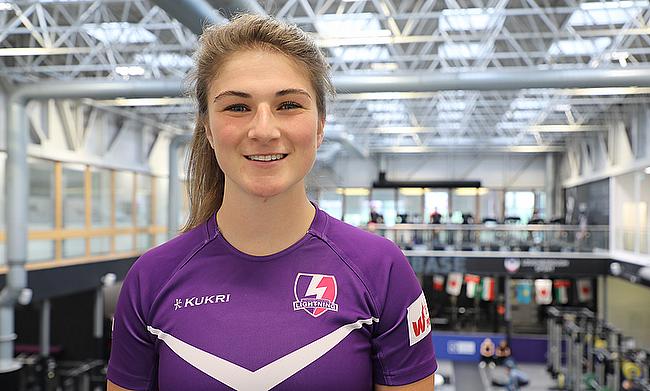 Scotland stand-off/centre Helen Nelson heads into her fifth Women’s Six Nations campaign in confident mood after a great first half of 2019/20 with club side Loughborough Lighting.

The 25-year-old spent season 2018/19 in France playing for Montpellier, but jumped at the chance to get involved in the Tyrrells Premier 15s last summer within a Lighting group who already had Scots like Rachel Malcolm, Sarah Bonar and Rhona Lloyd on their books.

Now Nelson, one of the Scots leadership group supporting skipper Malcolm, cannot wait to add to her 26 international caps starting against Ireland on Sunday.

And she has revealed that playing alongside key England players like captain Sarah Hunter (119 caps), Katy Daley-Mclean (110 caps) and vice-captain Emily Scarratt (85 caps) at club level has helped her a lot.

“I have loved playing down at Loughborough,” Inverness-born playmaker Nelson told TRU.

Not long to go now ?? Get your tickets for Scotstoun! https://t.co/peQwPFVpDt

“The set-up is one of the most professional I have ever been around down there and everyone in the 30 player or so squad knows their roles very well.

“There are great players there to look up to like Sarah, Katy and Emily and you can take a lot from the way they carry themselves on and off the pitch and how they go about their business.

“They never let their standards drop and that permeates through the whole squad and the culture there is excellent.

“All three are great leaders too and the main thing you pick up from them is just how to communicate out there on the pitch and get the best out of the players around you.

“We have a great leadership group with Scotland now and I think the way we all communicate as a squad and with the coaching group is helping us take things forward. There is clarity and understanding in what we are trying to do and that can only help us ahead of the Six Nations and then in the World Cup qualifiers later in the year.”

One other Scot who has been flying with Loughborough of late has been winger Lloyd - and Nelson has backed her to continue that form in the Six Nations.

“Rhona works so hard at her game, has come back from some bad injuries and is looking as sharp as she ever has,” Nelson stated.

“She has raw pace which defences don’t like and it is up to us as the players inside her to get her good ball on the front foot ad go from there.”

“The little lambs have all grown up”

Scotland head coach Philip Doyle is in bullish mood ahead of the start of the Six Nations campaign, believing the “little lambs” in his squad that he inherited six months ago are now ready to add a bit of bite to their game.

Last year, the Scots lost all five of their matches in the showpiece event, a step back from the steady progress of two home wins in 2017 and one away win in 2018.

The whitewash and bottom place finish 10 months ago cost then head coach Shade Munro and Scottish Rugby turned to the experienced Doyle, who led Ireland to a Grand Slam in 2013.

So far he has introduced a handful of new caps to the squad and they have won three Tests out of five under his guidance, with many players speaking about the harder edge he has brought to their game.

Ahead of Sunday’s trip to Dublin Irishman Doyle said: “Things now are night and day from when I started, I had little lambs running around the place and now they have all grown up.

There were plenty of positives for Rhona Lloyd after a successful #Biarritz7s and as Scotland prepare for Marcoussis this weekend, the Sevens star has taken inspiration from an Olympic gold medalist...https://t.co/gPPD413bdb

“They are starting to get confidence knowing that their skill set is better, they are fitter and they are stronger - proof of that came in the friendly win versus Spain last week.

“In the past, results have not been good enough so now is the time to improve our performances after a positive start to the season.

“I have been focusing on pushing myself, players, staff and all at Scottish Rugby to improve and everyone is very much working towards the same shared goal right now.

“We’ve got to make our girls a lot more robust to withstand the physicality of the new type of game we are playing and Alan MacDonald, our strength and conditioning coach, is doing great work there.

“We must close the gap on every single country in the Six Nations. If that brings a big ‘W’ then great, but we must start closing that gap significantly from a performance point of view.”