Scotland star Malcolm on balancing top-level sport and a PhD 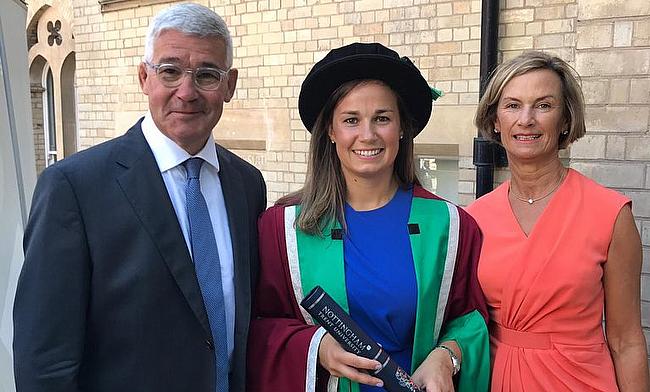 Next month, Rachel Malcolm will hope to be part of new head coach Philip Doyle’s first Scotland Women’s squad that jets off to South Africa for two Test matches, but of late, all of her focus has been closer to home.

That is because the 28-year-old Loughborough Lightning back-row has been competing her PhD in Environmental Physiology at Nottingham Trent University.

The last five years of part-time study while she has also been working as a lecturer and playing top level rugby for club and country have all been worthwhile though as in late July, she graduated and is now a doctor.

Having come from a sporting background - her father and brothers all playing and loving rugby and Malcolm herself being an accomplished hockey player - juggling different commitments is something she has been used to since she was at Hutchesons’ Grammar School in Glasgow.

She then moved onto Loughborough University to complete a Sports and Exercise science degree and was playing age-grade hockey for Scotland at the same time.

"My vision for the women’s programme here is to be the best performance development centre in the world for women’s rugby"@joeharvey34 chatted to @LightningRugby head coach Rhys Edwards about the continuous growth of women's rugby at Loughborough.https://t.co/E8xszZhbPI pic.twitter.com/KSRhikTh77

Next came an Exercise Physiology masters degree at the same university and when she began the PhD at Nottingham Trent in 2014, you might have thought sport would have taken a back seat.

For Malcom, that was not the case and in the summer of 2015 she took up rugby with Lichfield Ladies and since then, she has become a key player for the Lightning in the Tyrrells Premier 15s and has 11 full caps for her country.

“It has been a hectic few years, but I have loved every minute of it,” Malcolm told TRU.

“When I was at Loughborough, I became fascinated with sports performance and wanted to take that on a bit.

“Nottingham Trent University seemed like a great place to be and over the last five years I have been doing my PhD part-time while also lecturing there. I was looking at quite specific things in my PhD such as decision making in the heat and how your brain is impacted in those conditions.

“A lot of people think that due to the field of study I must have been away in hot places a lot in the last five years, but alas no. At the university there is an environmental chamber which creates different conditions and I spent lots of hours in there when it was heated up to 40 degrees!

“With the nature of the research I relied a lot on other people to take part in studies and such like and the thing that I found the toughest over the five years was people being unreliable and not turning up.

“I also faced challenges like equipment failing just a few days before a massive project, but these are all things you have to deal with and I am so happy that I did what I did.”

Not enough hours in the day

The commitment needed to be a top level athlete is huge, as is the ‘buy in’ required from anyone doing a PhD.

So how has Malcolm managed the workload and expectations over the last five years?

“I had great support from people along the way and they helped me a lot,” she stated.

“The PhD has been the biggest challenge of my life when it has come to balancing my studies and top-level sport, but because I have been used to doing that since I played age-grade hockey for Scotland I think I have got used to the demands.

“I am quite organised when it comes to managing my time, but I could not have done it all without the support of my family, friends and team mates because they keep you going.

“Most of the Scotland girls have to balance sport with their life. There have been times where I have flown back from national camps or matches on a Monday morning, gone straight to work and then straight to training with Loughborough that evening before it all starts again.

I feel very lucky to spend every day surrounded by women who inspire me to be the best I can be. I couldn't think of a better way to spend international women's day than going to battle with a squad filled with those women! Get behind @scotlandteam @ 7.40pm on BBC alba or get down to Scotstoun! #womeninsport #IWD #womens6N

“That is just the way it is though and if you want to play sport at the top level, particularly as a female, then you have to make sacrifices and make sure you have a good support network around you.

“The mentality and attitude in the Scotland squad is top notch and everyone goes above and beyond.”

As well as balancing her academic and sporting life during 2018//19, Malcolm also had to deal with two concussions.

She admits they caused her more than just literal headaches, but she got through the tough times.

“One of the issues I had during my first spell of concussion last season was it was really hard to combine trying to do my rehab and also work,” Malcolm, who is now working as a full-time Applied Sport Science lecturer at Nottingham Trent as well as continuing her research, stated.

“That was really tough because I was trying to work and using my brain a lot, but that probably wasn’t the best when I was trying to recover from the concussion. My work were really supportive of the situation and gave me help to get better quickly.

“It is the same with all injuries, if you come back to work on a Monday with a knee or an ankle injury it is hard, but I think a lot more workplaces are now understanding of the fact that people are playing sport to a high level.

“I managed to come back and play for Scotland in three Six Nations games, but picked up another concussion against Wales when I hit my head.

“That meant I missed the last two games in the championship, but recovered quicker than the first time and played the end of the season for Loughborough.”

Doyle, the former Ireland Women’s head coach, took over from Shade Munro in the top role with Scotland a few months ago.

As mentioned, they head off to South Africa in late September and early October to play two matches in Cape Town as things start to build-up to World Cup 2021 qualification.

Malcolm, who has played hooker as well as back-row for Scotland since making her debut back in late 2016, is keen to be a part of things under Doyle moving forward.

Words will never do justice just how much you have done for us. The opportunities and the belief you’ve had in me, since my very first season of rugby, have not only completely changed my life but made my childhood dreams come true. Thank you for everything @shademunro ?? https://t.co/DSrgKEI2BS

She explained: “I haven’t spent a lot of time in Scotland this summer, but we have camps coming up and having spoken to Philip a couple of times I think there are exciting times ahead and the change [of coach] may be good for us as a group.

“The girls are all focused on having a big 2019/20 and everyone is champing at the bit to try and build on what we have done in recent years. These are exciting times for us all.”

“When you do a PhD, you have a group of supervisors who are experts in the field and they help you to work out if your ideas are novel and such like and help you steer your studies in the correct direction.

“My main supervisor during my studies - Caroline Sunderland - is one of the top experts in the field and working with and learning from her was excellent.