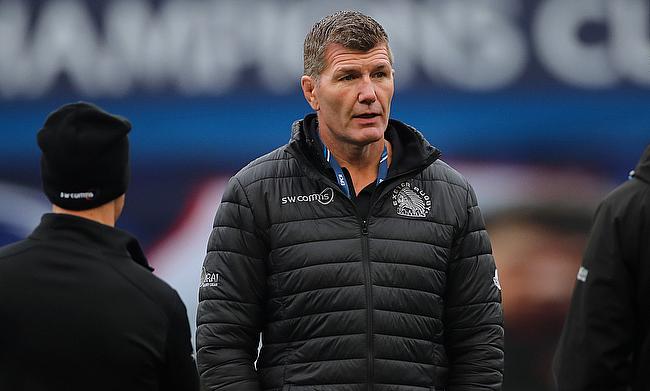 Once more the Premiership title will be contested between a team who have been constantly seen in the knockout stages of the competition and a side whose place at Twickenham comes thanks to a late season run of good form.

Last year it was Wasps who upset the apple cart by going on a hot streak to finish the Premiership season in the showpiece and Harlequins have done much the same. Parting ways with Paul Gustard in January, the West Londoners were placed seventh and at the conclusion of the regular season finished fourth.

Winning eleven games since Gustard’s departure, there has been no main figurehead to guide the squad. Instead, it has been a combination of the team’s General Manager, Billy Millard, Attack Coach, Nick Evans, Scrum Coach, Adam Jones and Defence/Lineout Coach, Jerry Flannery, who have shared the burden.

Overturning a 28-0 deficit to guarantee their place at Twickenham, Flannery believes that a combination of factors has led to a date at England’s national stadium, with the announcement of a head coach impending the following week.

“I think when teams looked at us and how we have been going, they would probably have a little bit of a false picture of us, because we were missing a lot of our best players when Gussy was here and we’d actually only lose two games in the league. We’d lost at Bristol and Exeter, that’s it.

“So, when Gussy left we got all of our best players. We got Steph Lewies, we got Matt Symons, we almost get everyone fit and we were playing teams that were missing all their best players through injuries and international call-ups. We had a real goldilocks period and teams didn’t see us as a major threat, so we stole a good bit of momentum.

“You look at the way we play, confidence is a big factor in it and the players stepped up. There were a few questions asked of them when Gussy left and they stepped up and answered them.”

Ahead of a trip to Brentford tomorrow, I spoke to @Harlequins wing @cadan_murley.

Talking about the team's recent good form and much more, read the interview below??

For the Final, Quins have made three changes to their starting side. After finishing his suspension, Springbok Andre Esterhuizen starts at inside centre, Ben Tapuai moving to the bench as part of that change.

After a good showing off the bench at Ashton Gate, James Chisholm swaps places with Tom Lawday at blindside flanker and, finally, academy product Cadan Murley starts on the wing after an injury to Aaron Morris that was picked up in the West Country.

Joe Marler, Scott Baldwin and Wilco Louw are the front-row, as Matt Symons and Stephan Lewies are the lock partnership. Jack Kenningham and Alex Dombrandt form the rest of the back-row. Like Marler, Danny Care starts in consecutive Quins Premiership Finals, as Louis Lynagh, Joe Marchant and Tyrone Green will be offering their support in the backline.

It was this fixture that started the Premiership season on a Friday night at the Stoop, Sam Simmonds setting out his stall for Lions selection this summer with a hat-trick.

Coming into their sixth consecutive Premiership Final, Rob Baxter’s Exeter Chiefs come into the match-up off the back of a 40-30 win over Sale Sharks at Sandy Park. Unchanged from that win, Baxter has again kept Stuart Hogg on the bench, Jack Nowell maintaining the full-back jersey.

As a result of this, Nowell will have played in all six of Exeter’s days out at Twickenham, whilst Alex Cuthbert is on the hunt for a second English domestic championship in his final game for the club, as Tom O’Flaherty, Henry Slade and Ollie Devoto will be hoping to put a full-stop on their fine domestic seasons.

Captaining the side from full-back, Joe Simmonds will be playing his final game before a potential England call-up, whilst Jack Maunder completes the half-back partnership. Each of Harry Williams and Luke Cowan-Dickie started in the club’s first Premiership Final all the way back in 2016 and do so again tomorrow.

Rob Baxter spoke to the media to discuss the Covid-19 cases in his camp and more.

Alec Hepburn starts at loosehead, whilst Jonny Gray and Jonny Hill continue their partnership at lock, whilst Jannes Kirsten, Richard Capstick and the captivating Sam Simmonds combine to form the back-row.

With plenty of knockout rugby experience amongst this group, Exeter are no doubts favourites and the reasons for which are clear. Harlequins, in contrast, have made their first Premiership Final in nine years and announced on Tuesday that there would be a change to their coaching staff win, lose or draw.

Four players who started in the 2016 final will be doing so again on Saturday evening, whilst Jack Yeandle, Ben Moon, Don Armand, Stu Townsend and Stuart Hogg can offer big game experience from the bench.

But what is it that has allowed this continued success for Baxter?

“We have definitely got people here who like winning,” Baxter told TRU. “I know that sounds simple, but I think it is not. I think that is a massive driver for a lot of people and when I say people like winning, I think everyone likes winning but there is a difference between liking winning and doing the things that need to be done to make it happen.

“Not all of it is nice and a hell of a lot of it is to do with honesty and I would say, if anything, we have got a really honest group of people here at the club, from the top down to the bottom, who want to work hard and are prepared to work hard and actually care about what they do I think that wraps it all up for me.