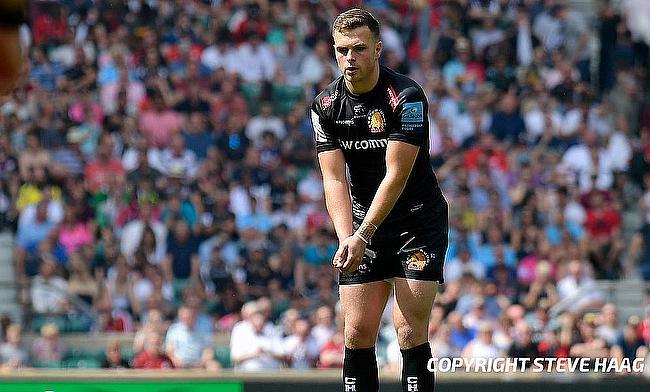 At 24, Joe Simmonds is already an old head on young shoulders.

Having taken on the captaincy of Exeter Chiefs all the way back in January 2020, the fly-half has since lifted two trophies alongside club captain Jack Yeandle and is aiming to be lifting the Premiership again on Saturday afternoon.

It doesn’t feel long ago at that Exeter overcame Wasps at Twickenham, for the quite simple reason that it wasn’t long ago at all. In sopping wet West London at the end of October, Simmonds kicked 14 of Exeter’s 19 points on the day to lift the club’s second Premiership just a week after they lifted their very first Champions Cup.

With just a two-week break separating their achievements from the new season, after another eight months Simmonds and his colleagues in black and white are back at the home of English rugby to try and win a third Premiership title in their sixth consecutive appearance at the showpiece event.

“For us as a squad, after winning those two finals last year and it was two weeks off, we didn’t have time to reflect, we were pretty much straight into this season,” Simmonds said. “I think the good thing about that is that we have had the thrills of winning last year and I think the boys just want it more and more this year.

“I think the good thing about that is that we have had the thrills of winning last year and I think the boys just want it more and more this year. Sometimes you win something and then your motivation is down. But for me, just turning up on the Monday, the first week of winning those finals, everyone was just excited to go again.

“Obviously there have been challenges in and between, the Covid and stuff like that, but here we are now and ready to go.”

Coming into the final with Harlequins, there can be no complacency against a side that overcame a 28-0 deficit against Bristol Bears at Ashton Gate. Even their own semi-final was a points-fest, the incumbent champions riding a Sale Sharks storm to win 40-30 at Sandy Park.

Home comforts will be at a premium this weekend with just 10,000 fans allowed into Twickenham for the final. The argument will no doubt be made that it will be Harlequins should feel much the more comfortable, as the fixture is taking place just a stone’s through away from the Stoop.

What an eight days it could be for @ExeterChiefs and Joe Simmonds.

The fly-half will be leading his side into a @ChampionsCup and a #PremRugby final so TRU heard from some of the people who have witnessed the 23-year-old's rise.https://t.co/JLkCaTwFWw pic.twitter.com/03xJzYFQE7

But for Exeter their trips to the national stadium have become more and more frequent, with the date of the final always circled in players’ calendars. This year, Exeter will be playing in front of friends and family again, after winning two competitions last season in the caverns that were Twickenham and Ashton Gate.

“It is huge,” Simmonds said. “You can’t take it for granted and we saw when we won in Europe and the Prem last year when we didn’t have fans. The love we get on social media and how much it means to people outside of this group here, it means so much to fans and even our family as well.

“You speak to them straight after the game, they are very, very emotional, but they have worked their asses off year in and year out to get you to games when you were younger, and they have pushed you to where I am now and for me it is to give back to them.