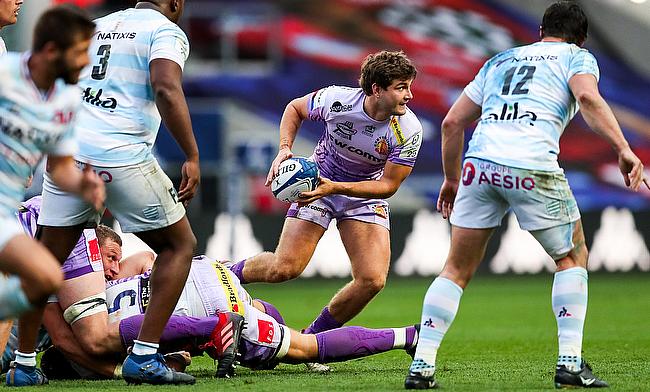 It has been a while since Exeter Chiefs have played in a “must-win” game in the regular season.

Coming into their encounter with Newcastle Falcons on Sunday afternoon, Exeter must beat Dean Richards’ side in order to leap ahead of Alex Sanderson’s Sale Sharks in order to try and secure a home semi-final in the postseason.

Of course, Rob Baxter’s side will have the added motivation of having fans back at Sandy Park, but in Newcastle there is a stern test facing the 50-year-old’s matchday 23. Falcons come into the game off the back of back-to-back wins, the side having dispatched London Irish and then Northampton Saints in consecutive fixtures at Kingston Park.

No doubt confident following these victories, Baxter’s team too have the wind at their sails. Having last lost in the Premiership at the end of March at Kingsholm, the side possess some of the most valued players in rugby at the moment, the likes of Sam Simmonds, Luke Cowan-Dickie, Stuart Hogg and Jonny Hill all selected for Warren Gatland’s Lions.

Simmonds is perhaps the player with the most intrigue, the No.8 bit having represented England for a number of years now, but has scored 19 Premiership tries this campaign, smashing the 23-year-old top-flight record for the number of tries registered in one season that was previously shared by Dominic Chapman and Christian Wade.

With Falcons on the hunt for a top-eight finish, that would ensure Champions Cup rugby for next season, Baxter has selected a strong squad for the encounter.

Playing at scrum-half is 24-year-old, Jack Maunder, the England cap having taken on the mantel of the team’s starting nine after Nic White headed back to Australia.

He puts a try on a plate for Jack Maunder as Exeter come from behind to get a bonus point win vs Sale. #GallagherPrem pic.twitter.com/krAB8N1CTn

Having lifted a Premiership title and Champions Cup in the past 12 months, Maunder believes that the messaging from Baxter remains the same going into the closing three games, a run that includes a trip to Northampton and then Sale Sharks.

“I know this might sound weird, it (the messaging) doesn’t really change through the whole season,” Maunder told TRU. “We always talk about our focusses, what we need to put into every single game, which is nice because when you get to these games that are very important, nothing really changes in our operation.

“We are always very detailed, we analyse a lot, we always work very hard, and we are always looking to improve, so the messages have sort of been the same.

“Rob expressed to us, just this morning, how important this game is for Newcastle, and I think the message gets taken in loud and clear and this is a big game and we need to rock up on Sunday with the right frame of mind.

“Otherwise, Newcastle will put us to the sword because they are a great team and they have had some great wins this season. We all know how tough it was doe the lads that played up there, hopefully it won’t start hailing after 15 minutes of the game, because that was brutal.”

Prior to the start of the current campaign, Rob Baxter and his team were steadfast in their stance of repeating their heroics of the previous season.

Winning the double last season, over last weekend Maunder had to watch on as Toulouse became the champions of Europe for a fifth time and has ignited the fire inside his belly as the former Blundell’s schoolboy looks to bring a third Premiership title to his hometown club.

“I did end up watching it,” Maunder said. “I won’t lie to you, I had a few beers before it, just to settle the emotions done. It looked like a classic French final, didn’t it? Very attritional, no one really wanted to make a mistake and were sort of trying to keep within an arm’s length of each other.

“But watching that was a little bit tough, brought back some bad memories of the Leinster game, but that is all done now. We have sort of got to put our best foot forward over the next couple of weeks and start hitting our best performances. I think that is key.”

Having never successfully retained a Premiership crown, there is much to play for at Sandy Park on Sunday afternoon. Regardless of whether or not Exeter become domestic champions for a second straight year, it is still a club deemed as one of the most highest performing in the first division.

Eddie Jones will have 11 England internationals away this Summer with the Lions and places are up for grabs in the squad. It was four years ago that Maunder gained his first, and only, cap for England. On the tour to Argentina, it is often felt that Exeter are largely underrepresented in the national setup.

For a time, many clamoured for Don Armand’s inclusion in the England squad, then as the years have gone by, both of Sam Simmonds and Joe Simmonds have stepped up to the plate and one of the more recent suggestions for caps has been Ollie Devoto.

With two England caps to his name, the centre has impressed many with his ability to drive his team forward and has clearly made an impression on his Director of Rugby.

“He is looking very strong, isn’t he?” Baxter said. “His is looking big, strong, quick, his is taking the game into his own hands, he is wanting to be involved in the game. A lot of what we do involves him.

As for Maunder, the question circles the 24-year-old as to whether or not he will get another opportunity with a red rose on his shirt.

In a competition with his brother, Sam, as well as Stu Townsend and Sam Hidalgo-Clyne, for the starting spot at Sandy Park, the player says he is focussing on bringing success to his club ahead of any sort of international honours.

“If opportunities arise, that’d be awesome, that Argentina tour is one of my favourite memories ever as a rugby player. It was awesome and I absolutely loved it, so to have the opportunity again would be awesome, but my sole focus now is on Exeter Chiefs.

“The rewards come from playing well for Exeter and my job is to try and make the team play as best as it possibly can and get the ball into our superstars out wide as efficiently as possible. So, if I keep it nice and simple, then hopefully it’ll be alright.”