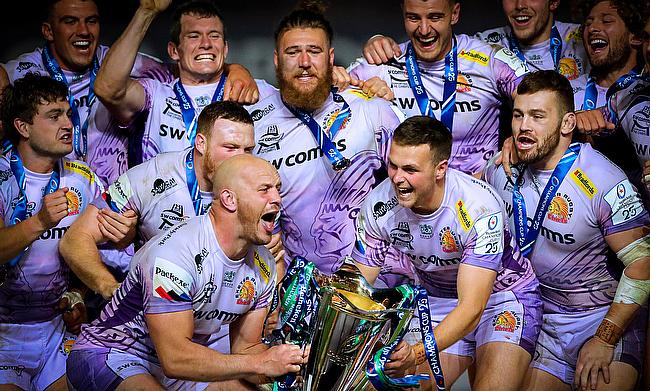 Sam Simmonds wins the European Player of the Year Award
Highlights: Heineken Champions Cup Final - Exeter Chiefs 31-27 Racing 92
The rise of Joe Simmonds: The Exeter fly-half hoping to lead the Chiefs to glory
Conquering Europe: Can Exeter Chiefs take the next step in the Champions Cup?

In the 2012/13 season, Exeter Chiefs were stepping into the unknown.

After two solid campaigns in the Premiership, Rob Baxter’s side had earnt themselves a spot in the Heineken Cup for the first time in the club’s history and they were savouring every moment of their European journey.

In the same year, Jack Yeandle was also relishing the opportunities that came his way in a Chiefs jersey. After beginning his senior career in the Championship with Doncaster Knights, the hooker had arrived at Sandy Park that summer and it was a return home for the forward having grown up in Devon.

Yeandle made his Exeter debut in November 2012 in a 42-15 victory against London Welsh in the LV=Cup and less than two months later, the then 23-year-old was experiencing the Premiership and European stage for the first time.

The Chiefs didn’t progress beyond the pool phase of the Heineken Cup in that particular campaign and they also finished sixth in the Premiership, but seven years on, it is an altogether different story for both Exeter and Yeandle.

Last weekend, Baxter’s charges triumphed over Racing 92 to become the kings of Europe and it was club captain Yeandle who raised the Champions Cup at Ashton Gate alongside Joe Simmonds.

There could also be more success to come on Saturday, with Exeter targeting further glory in the Premiership final against Wasps as they look to secure a sensational domestic and continental double.

“Last weekend was absolutely phenomenal,” Yeandle exclusively tells TRU. “I joined the club eight years ago and I didn’t make my Premiership debut until I was 23 and in that season when I joined, we actually celebrated just being part of the Heineken Cup. I think we just qualified and I managed to play a couple of times.

“I remember we had a big celebratory meal and drinks just for being part of the tournament! To push on and go all the way to win it in that period of time just shows not only how well the building process has been, but also how well the club have nurtured players coming through.

“If you look at the team that we had from back when I joined, yes you have had a lot of players who have moved on, but we’ve had solid recruitment and that well nurtured talent has always come through.”

Exeter’s rise to the top has been remarkable, but the ethos and culture which Yeandle alludes to has remained the same throughout the club’s pursuit of glory. Even in this season of all seasons, the Chiefs have continued to raise their own level.

Because of Saracens’ salary cap breaches, many have felt the Premiership title has been Exeter’s to lose having competed in the previous four top-flight finals, but even with that added weight of expectation, Baxter’s side have never taken their eye off the ball.

Following rugby’s restart, the Chiefs sat on top of the Premiership table and despite securing their play-off spot well before the conclusion of the regular season, Exeter were relentless. The momentum generated on the domestic front bled into their European campaign and even after lifting arguably the biggest prize in club rugby last Saturday, Baxter admitted some of his players said to him: “Imagine if we had played well, Rob?”

So, what is the secret to Exeter’s consistency and journey to the top?

“Togetherness has always been a big thing,” says Yeandle. “There are no superior ‘big dogs’ and there is no-one here who is above anybody else.

“We all take the piss out of each other just as much! It is just a great place to be a part of. That is easy to say when we have just won a European trophy, but it is genuine fun going to work. We just have a good laugh.

?? - After the emotions of Saturday, @ExeterChiefs DoR Rob Baxter focuses his sights on securing a dream double with victory in the @premrugby final ??https://t.co/f14HClSfT5 pic.twitter.com/GKwkn0tqE0

“The need to drive standards is a reflection of the whole squad. The training standards which we have against each other are very high and that has filtered down from coaches and it is driven by the players.

“In fact, a lot of it is very player driven. If it is not someone telling you to pull your finger out, then it will be a few of the other lads ripping the piss out of you! For example, like when we were working on kick-offs on Wednesday, if a fly-half slices a kick, he’s getting absolutely heckled, but it is getting the best out of you!”

And have the Chiefs felt any extra pressure this season? “I think it has been both sides of the coin really,” Yeandle explains. “You do go to the side of it where you realise that all of a sudden you are the team to beat.

“We used to be the opposite of that. Say we were coming up against a Leicester [Tigers] or someone like that back in the day or Saracens, everything would be raised. The intensity would be raised and everyone would be more switched on and excited about what is going on.

“On the other side of it, we have said if we’re not on top of our game, then you are at risk of not putting your best foot forward for the club. It’s just making sure that the internal focus is the biggest driver in that and hopefully that gives you the outcome you desire.”

The result on Saturday will obviously be of great significance to Exeter, but for club stalwarts Gareth Steenson and Phil Dollman, hoisting the Premiership trophy into the Twickenham sky would be the fairytale ending to their highly successful Exeter careers.

The duo are calling time on their Chiefs playing days following this weekend’s final and they both featured in Yeandle’s Premiership debut against Northampton Saints nearly eight years ago.

Yeandle also lifted the top-flight title for Exeter alongside Steenson in 2017 and the emotional element attached to this week has not gone unnoticed by the squad at Sandy Park.

“We had a players do on Wednesday and it was emotional,” Yeandle adds. “There were a few wobbles when the boys were speaking and there were definitely a few tears flowing around there. You spend so much time with each other and you build such a tight bond so I think the emotion is such a big thing in it when people move on or retire.

“The lads said their bits on stage and I presented them with a few retirement gifts. I actually had a lot more to say, but I just couldn’t! That emotion is now out there so now we can use that and channel that energy into a good performance at the weekend.

“To send the boys off in what could be an iconic scenario by doing the double, it would mean so much to them and the whole club.”

Ending the season at Twickenham has become something of a formality for Exeter. Saturday’s final will be their fifth successive visit to England HQ, but only once have the Chiefs triumphed. On that occasion, they defeated Wasps in dramatic style as Steenson’s late penalty deep into extra-time clinched the club’s maiden Premiership crown.

On Wednesday, Wasps were cleared to take part in this year’s final despite 11 Covid-19 cases within the club in the past week.

Bristol Bears, who finished third in the Premiership standings, were on standby if Lee Blackett’s side were unable to fulfil the fixture but now Exeter and Wasps will renew acquaintances at Twickenham.

For the Chiefs, they are on the brink of club history and whilst a double winning season would mark a truly memorable milestone in Exeter’s story, they show no signs of stopping there.

“Why work so hard all season to then not give it your absolute all at the weekend?” Yeandle says. “I think the hardest challenge is making sure that our emotional reset is there. We have said amongst the lads, the thing about this where you go final to final is so rare in a normal rugby calendar. There is normally a game in between or two games in between. It is now the top two teams going at it so if you want to be the best, you have to beat the best.

“This will be our fifth Premiership final in a row and that kind of indicates that we are on a decent path. If you look at how close last year’s final was as well, a lot of that hurt has spurred us on. With each of those big games, players are getting more experienced and more exposure to really high intensity rugby. It is building layer upon layer of experience and confidence. Now, it is about making sure we go out there, use that and put in a Chiefs performance.”