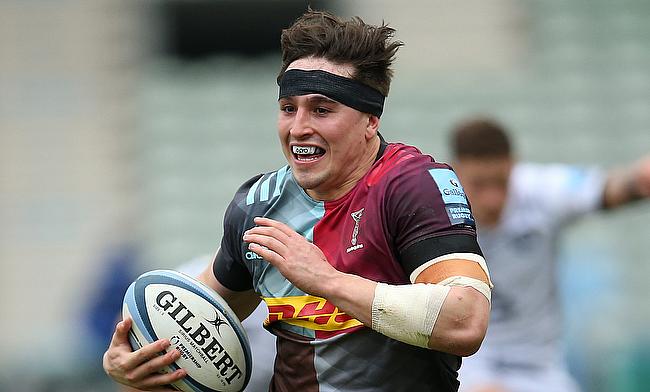 Cadan Murley has started each of Harlequins’ last five games and the 21-year-old has seemingly continued the form which saw him recognised as an emerging Premiership star at the conclusion of last season.

Now approaching the 50-appearance mark for his team, Murley’s recent run in the quarters has come following extended time on the physio bench due to injury.

Racking up a half-century of points against Worcester Warriors last time out, Murley is back to enjoying his rugby and Quins have consolidated themselves in the top four of the Premiership table.

Currently sitting in fourth place and level on points with Sale Sharks, the winger believes the player-led mentality of the squad - since Paul Gustard departed the club in January - is why the side have been playing with freedom in recent weeks.

“I think it is just the attacking mindset more than anything,” Murley said. “With there being no head coach, there is just a bit of freedom. A lot of the senior boys have led it, led the Quins mindset, the likes of Danny (Care), the likes of Joe (Marler) and Browny (Mike Brown).

“They really spoke up a lot and they were like 'this is us, this is Quins, this is our identity, we throw the ball about and we score a lot of tries.' I think that boys are playing with smiles on their faces, and I think that shows on the scoreboard.

“For me, I just felt like I could express myself a little bit more. I could throw an offload that was probably 70-30 and I wouldn’t be too worried about the consequences.

“It just gave me that freedom to try and express myself a little bit more and I think everyone felt the same and you can see that with some of the tries we have been scoring. There have been a few offloads, just keeping the ball alive basically. The Quins way.”

Along with Louis Rees-Zammit, Ioan Lloyd, Ollie Lawrence, Harry Randall, Ollie Hassell-Collins and Alfie Barbeary, Murley was identified as a breakout star of 2020.

We're excited to see what's in store for these players in 2021! ?? pic.twitter.com/JdKkTQQqbd

Having been involved with the club’s senior side since 2017, he has continued to impress. Of course, it is not as though his talents weren't spotted at a younger age as he represented England U18s and England U20s, whilst some even drew comparisons between Murley and England and Lions wing Jack Nowell.

A combative runner and not afraid to put a shoulder in, Murley's form with the first team has been impressive. With places on England’s tour of the USA and Canada up for grabs due to the Lions series against South Africa, the Quins flyer could well be in the frame for a possible call-up.

Of course, in recent years, there have been plenty of Harlequins players who have warranted higher honours in the eyes of many. At the top of that list is Marcus Smith who has been one of the most consistent performers in English rugby and after the Quins centurion, your attentions turn to Alex Dombrandt and Will Evans as two of the younger players capable of making the step up to Test level.

Joe Marler, who is playing some of his best rugby, opted not to feature for England in the most recent Six Nations campaign and Danny Care is many people’s dark horse for the Lions this summer.

With so much positivity around the side at the moment, it is clear that even when watching on from afar, the players are very much playing for one another. Due to Covid-19, squads haven’t been able to socialise properly, but despite that, this current Quins group have gone from strength to strength both on and off the field.

“I think we have got a really close group,” Murley said. “Those senior players have had to step up and it is a lot more player-led, I’d say. We have had those tough conversations with all the players in and they always bring you closer anyway and with a few things opening up now, we are able to do a few things as a squad.

“We have the players room back open now, so we are allowed to play pool and stuff. It is just getting a bit more normal, but I think the group as a whole is really close at the moment.

“I think we have got a brilliant environment around here where it is all about challenging each other. If you look at our squad as a whole, it is very young. We have got a lot of young leaders and it is all about that competition because we know it is not going to be easy to get your spot every week.

“When I first came back from injury, I didn’t get selected because there is no shoo-in into the team anymore. If someone is training better than you, they are going to get the chance. You have got to put your best foot forward in every way, shape or form in training and hope that you do enough to get your name on that team sheet.”

Now preparing for a clash with London Irish, Quins come into the encounter off the back of their 50-26 win over Worcester at the Stoop. Looking to tighten their grip on a place in the top four of the Premiership, Murley says despite that good showing, he and his teammates have already set about trying to improve for this weekend.

“In the chat after the game, Dombrandt (Alex) just said it was a brilliant win, five points and we scored 50, but we know that not by any stretch of the imagination that that was one of our best performances of the season,” Murley said.

“At the start (against Worcester), we got into a to and fro scoring battle and we weren’t winning our collisions. We spoke at the end and said we need to look on this week to improve because against the better teams in the league, we can’t have lapses at the end where we gave them a bonus point because they scored two in the last four minutes.

“We can’t have those little lapses because ultimately that could cost us. We could drop points that mean we don’t get to the top four.”

Like Harlequins, London Irish have impressed many with how they have gone about their business for much of this season. Along with Marcus Smith, Paddy Jackson is one of the competition's most consistent men at fly-half and is naturally a key part of the Exiles' game plan. 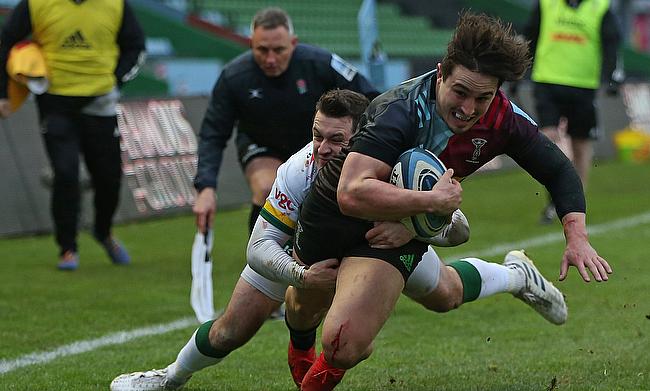 Added to this, their back three of Tom Parton, Ollie Hassell-Collins and Ben Loader have grown with every passing involvement.

“I have played with Ollie, I have played with Ben, they are both going really well at the moment,” Murley said. “They are really good athletes and they are very good runners of the ball, so we have got to be aware of the threats around there.

“Then Paddy Jackson at 10, pulling the strings and kicking a lot. We will be looking at a bit of everything this week, but we just want to play the Quins way and hopefully we will sort out those little blips of concentration that we lacked in at the weekend and hopefully put a really good game on the park this weekend.”

As of last week, there is now less than a month until fans will be welcomed back into venues. From May 17, a capped number of supporters can make their way through turnstiles, which is not lost on Murley and his teammates.

With this in mind, Harlequins have already begun the sale of their season tickets for next season. Having seen their team go from strength to strength, you can imagine that interest will be high and their young wing is hoping to see some happy faces in the coming weeks.

“We have been absolutely gutted that they haven’t been in as much as we’d have hoped this last year and we can’t wait to get them back in the ground and we will really relish that when they do come back and hopefully keep performing the way we are and keep seeing smiles on faces.”