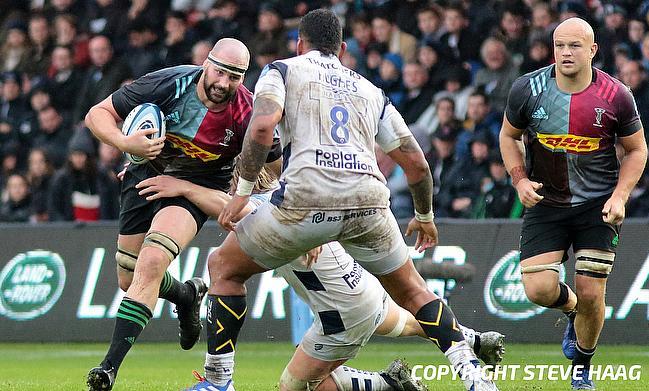 Matt Symons is on his way home as we talk.

Having just finished his Tuesday training session, the 31-year-old is back fit again having missed last weekend’s 37-19 victory over Northampton Saints, having suffered the effects of a concussion sustained against Newcastle the weekend prior.

Joining Quins in 2018, Symons has become an integral member of the team, racking up over 50 appearances in West London so far. When reading up on the second row, it becomes clear that Symons is far from your ordinary rugby player.

Born in Harlow, he did spend time in the Saracens as a youngster, before leaving rugby altogether, in order to pursue his aspiration of being an Olympic rower for Team GB, before an injury resulted Symons then making his way back to rugby to play for Esher in the 2011/12 Championship season.

Making 14 appearances for the club, Symons then made his way to New Zealand in order to represent Canterbury, which eventually led to him securing a Super Rugby contract with the Chiefs.

Making the move back to the Northern Hemisphere in 2015, Symons represented London Irish and then Wasps before joining Quins. To describe the Quarters as being in a purple patch would be putting things mildly, the club winning five of their last six, that form propelling them to third in the Gallagher Premiership table, just two points behind this weekend’s opponents, Exeter.

?? Centres of excellence against the Saints.

?? Andre made the 2nd most tackles for us
?? @JoeMarchant96 made the most metres for Quins #COYQ pic.twitter.com/pZOsp4gZ8f

At times, Quins have been able to score points with relative ease, their win over Saints last time out a prime example of this. But, whilst there may not be the same opportunities this weekend, Symons saying that the backline in particular have been freed up in order to play some of their best rugby.

“We have got a fair bit of freedom,” Symons said. “Nick Evans is running the attack as he has done for years, we have got Marcus (Smith) at 10 who is in the form of his life, Danny (Care) at nine, we are not just throwing it about by any means, but with the opportunities we are creating, there is a lot of space out there and it feels like it.

“I’d say those key decision makers in the team are definitely freed up, my game personally hasn’t changed, but those guys probably do feel like there is a bit of weight off their shoulders for one reason or another but form definitely helps as well.

“When you have got a bit of confidence, that is a big thing. A lot of people have asked me that, it is quite hard to pinpoint exactly why, but I think certain people definitely do feel a lot freer.”

As mentioned, the likes of Marcus Smith and Danny Care have had major influences on recent results, but so have the likes of Alex Dombrandt, Joe Marler, Joe Marchant, Andre Esterhuizen and the evergreen Mike Brown.

Smith was named Gallagher Premiership Rugby Player of the month for February earlier today, although that award could have been presented to a number of his teammates as well.

Perhaps one of the reasons for Quins’ good form is the lack of players selected for international duty. Joe Marler chose not to represent England this Six Nations for personal reasons, whilst Marcus Smith’s and Alex Dombrandt’s omissions from Eddie Jones’ squad often leaves many scratching their heads and has caused plenty of conversation on social media.

Upon re-signing with Harlequins in the January of 2020, former Harlequins Head of Rugby, Paul Gustard, described Symons as ‘an international all but in name’, speaking volumes about the quality of both the player and the team.

Since then, the squad has improved in depth further thanks to the arrival of Wilco Louw, Stephan Lewis, Will Evans, Esterhuizen and Tyrone Green, whilst the emergence of Louis Lynagh has been beneficial to the coaching staff too.

Whilst playing professional rugby is a big part of Symons’ day to day life, his working week has some other aspects to it that his teammates may not. Currently studying for a Masters in Real Estate at the University College of Estate Management, he is an analyst for JLL, a global commercial real estate services company.

Not only is this helpful in the 31-year-old’s preparation for life after rugby, but he also says it allows him to take a break from the breakneck nature of professional sport.

“It is a really nice switch off for me,” Symons said. “Tomorrow (Wednesday), I will pretty much work full-time at home, it takes all the pressure off my rugby.

“As a rugby player, your shelf life is short, you are focussed on a one-year, two-year contract. Even if you are contracted, you are still worrying about your next deal, where that is coming from, moving your family, this that and the other.

“I think all players should be doing something outside of rugby, whether that is a trade, a degree, working, coaching, whatever, it is just a massive pressure reliever for me and a lot of other guys as well.

“There are more and more guys doing stuff outside of rugby, you see Jack Willis with his company that he has just set up with Alex Lundberg, who retired, that is only going to benefit him in this injured period.”

Launching RockCap with his former Wasps teammate last year, Jack Willis is just one player to be making his first foray into the wider working world. TRU columnist and RPA Chairman, Ethan Waller, is starting another business with his teammate, Niall Annett, called Sangers Deli, which will be opening in Worcester later this year.

Having studied Human Geography at the University of Reading before embarking on his professional career, Symons believes that the conversation surrounding a player’s transition away from playing must be changed.

“I think it has got to be flipped on its head to talk about the transition out of rugby,” Symons said. “It is very doom and gloom, and guys don’t want to talk about it, they don’t want to deal with it. They have got their next two-year contract. Let’s say you have got six months to run on your current deal and you are starting to worry, thinking ‘what am I going to do next?’, but then you sign another two-year deal and stop worrying about it. You are just delaying the inevitable.

“A lot of guys are doing really well out on the other side and we have got to celebrate that a lot more, rather than just looking at the doom and gloom of an athlete that has really struggled. That is just my take on it.”

Anyway, back to this weekend.

Quins are more than aware of the threat posed by the incumbent Premiership and Champions Cup holders, having welcomed them to the Stoop on the opening weekend of the season. However, whilst your usual house guests are courteous and polite, Rob Baxter’s team ran riot in West London, the game finishing 33-3 in favour of the men from Devon.

Now, just two points separate them in the league and a win for either team could potentially be incredibly important, depending on how Bristol’s Friday night game against Wasps finishes.

But whilst the task at hand is respected and appreciated by the players, they too must remember why they place just below their opponents. Playing some of the best rugby in the Premiership thanks to consistent front-foot ball, the lock confirms that he and his teammates will be maintaining their self-belief going into this weekend.

“You are just making small tweaks here and there, and that saves you a lot of time in the week and then focus on the opposition and not overcomplicate it. There are different ways of skinning a cat.

“I think for us, we are really confident in the way we are playing on both sides of the ball and it means that we can sharpen up our skillsets, just work on those little individual things that we need to get right.”