You get a ‘winning mentality' in both camps 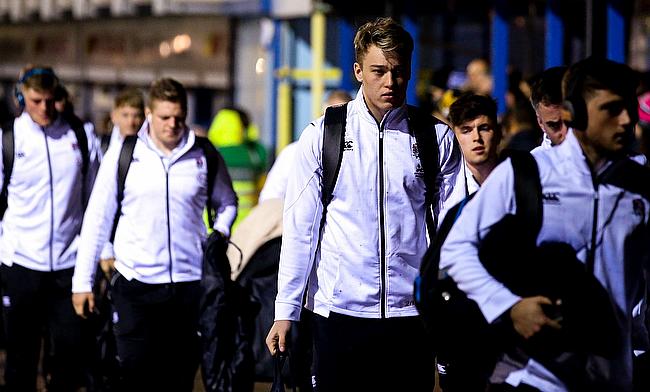 After an excellent first season for his university, Exeter's Richard Capstick is looking forward to the U20s World Cup
©England Rugby

England U20 seal 35-8 win over Junior Springboks
Bath’s Tom Dunn: ‘My advice would be to grab university rugby by both hands and run with it’
Sam Skinner: I feel very lucky to play in such a prestigious competition
Tom Lawday on the benefits of BUCS Super Rugby and why it helped him on his way to Exeter Chiefs

“It was really disappointing. It was the second year in a row that we had won the league and the aim was to win at Twickenham too, but we fell a fair bit short,” University of Exeter and England U20s forward Richard Capstick began.

“Being at Chiefs and at Exeter Uni, they mirror up so well. They’re so close with each other and they are both really successful at this moment in time and that drives you forward. You get a winning mentality in both camps which makes a really nice atmosphere.”

Not alone in having worn both Exeter Chiefs and University of Exeter jerseys, Capstick asked two of the senior players at Chiefs, Sam Skinner and Tom Lawday, for advice ahead of starting his studies: “At the start of uni, I talked to them a lot about how they managed their time.

“Especially Skinner, because he was really successful at managing his time. Then I talked to Lawday more about the social side, so it was quite good!”

“I think the pathway is so crucial."@ExeterChiefs' Tom Lawday on the importance of #BUCSSuperRugby and why professional links helped him on his way to Sandy Park. #unirugby pic.twitter.com/QKZgva8fF1

“That was the biggest win a team has had against Leicester, so it wasn’t a bad one to join in on and play in!”

“They really enjoy it, because with most forwards you’re not going to be playing regularly in the Prem until you’re 20 or 21 and that’s when I’ll be finishing my degree. So at least I’ll be backed up for after rugby,” added Capstick.

Furthermore, Capstick has enjoyed his debut season in BUCS Super Rugby under Keith Fleming and, despite having played several first team games for Chiefs, he hopes to be playing more university rugby next season too.

“The standard is really good. It’s fast and there are a lot of talented boys, especially at Exeter. It is a place that you go to develop. Especially for people that haven’t come from an academy background.”

It was Capstick’s performances in both BUCS and for Chiefs that earnt him a call-up for the U20s Six Nations earlier this year. England’s Six Nations campaign didn’t go to plan, losing heavily to Ireland 35-27 at the Irish Independent Park first up and they also fell narrowly short against Wales several weeks later. Despite finishing third, there were some impressive performances from the Young Roses.

A 31-19 victory over incumbent Junior World Champions, France, who England lost to in the final of last years competition, put many demons to bed. Heading off for this summer’s Junior World Championships in Argentina this week, the English have got Six Nations champions, Ireland, in their group and Capstick isn’t looking too much further than that test.

“They won the Six Nations comfortably, so if we beat them it sends a bit of a message to the rest of the competition and it’s good to have them first so that we know where we’re at and prepare and focus for them.”

Preparing at Bisham Abbey National Sports Centre for the Junior World Championships, before going to Argentina for the start of the tournament, Capstick is excited by the prospect of playing in South America.

“I’ve never been to Argentina, so I am looking forward to going out there. It would be great to see some of the country and, also, the rugby is good. Hopefully it is quite open and fast-paced, so that it suits my game a little.

“I just want to be as involved as possible and involved in a winning side. I’ve got another year of U20s, so hopefully I can win two years in a row. But that’s just a dream.”