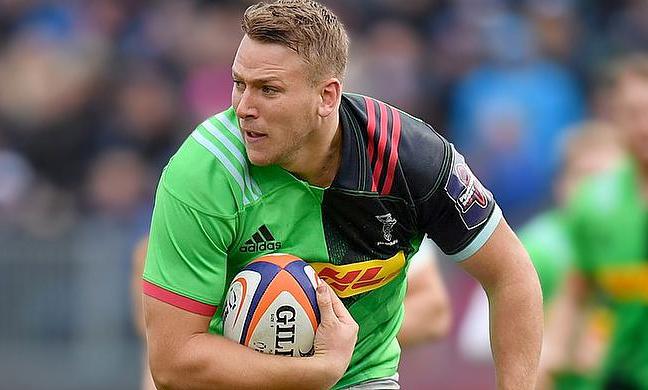 Alex Dombrandt is one of the leaders at Harlequins
©PA

When Harlequins parted ways with Paul Gustard in January, no one could have quite anticipated the turn of form that the club would experience in the months that have followed.

In some ways it has been akin to Lee Blackett’s arrival as head coach at Wasps partway through last season, the former Rotherham Titans coach taking his side to Twickenham last autumn.

It is the collaboration of Billy Millard, Nick Evans, Adam Jones and Jerry Flannery that has taken plenty of the headlines, and rightly so as the quartet have taken Quins to a Premiership Final for the first time in nine years.

The memory of 2012 will live long in the memory of plenty, the team’s walk from the Stoop across the A316 to Twickenham a dazzling display of passion for the quarters. Now, almost a decade on it is another example of pure passion and desire that has taken the side back to the top of the domestic game in England.

Having gone 28-0 down at Ashton Gate to the hands of Bristol Bears, it took a second half rally and extra time for the side to secure a place at Twickenham and pick up a rare playoff win on the road.

Whilst withering away was certainly an option for the Harlequins, they have stood up to be counted, the likes of Danny Care, Joe Marler, Stephan Lewies and Alex Dombrandt have been leading lights on the road to glory.

Care and Marler have been there and done it before, whether that be in a Harlequins shirt, an England one or even the Lions. Lewies too has a winner’s medal in his back pocket, the 29-year-old having lifted a Currie Cup all the way back in 2013 with the Sharks.

Dombrandt maybe doesn’t have the winners’ medals or the trophies, but what the No.8 lacks in titles, he more than makes up with in heart, a childhood supporter of Harlequins and has regularly captained the team in the absence of others this campaign.

The biggest-ever comeback in #GallagherPrem history! ??

?? Take it away, @Harlequins... pic.twitter.com/bthZUxRHen

“It has been massive,” Dombrandt started when asked what it meant to lead the club. “Growing up as a supporter of Harlequins and going to watch games in the crowd, to then when Steph was injured, I got called up and asked to be the captain and it was a huge honour and a privilege.

“I never thought I’d get one game for Harlequins, never mind getting to captain the club, so it was a proud day for me and my family for sure and it is the leadership role I am relishing at the moment.”

It is club captain Lewies who first gets the ears twitching, describing the leadership group as a ‘spine’ as opposed to a collective. In many ways it is the perfect metaphor, as without the leaders the team would cease to exist and function in the proper manner.

“If you look at our youngsters, they have been phenomenal and then with the older heads, Danny Care is playing like he is 22 again,” Lewies told TRU. “Marler, for a prop, was on the pitch for 95 minutes last weekend, which is an absolute joke. The big thing is that the leadership group, or the spine group, has been stepping up week in and week out.

“They have been performing for us and that has been big for us to be honest. I think there is a good age profile in that spine, representing all ages in different positions, so that has helped us a lot.”

When thinking of Dombrandt, it is hard not to think of his relationship with Twickenham. On Saturday, Dombrandt responded to a tweet of him walking off the national stadium’s turf as a beaten BUCS Super Rugby finalist in 2018 as Cardiff Met were beaten at the death by Hartpury.

Compare the photo of Alex below to the one I took of him at Twickenham in 2018 after @cardiffmetrfc lost the BUCS Final.

“It’d be massive (to win this weekend),” Dombrandt said on Tuesday afternoon. “I’ve had some good memories, like you say I’ve had some not so good memories. But for me, I think this is the biggest game I’ll have been involved in, head and shoulders above.

“So, just looking at embracing the whole day, the whole week and lead up and being able to share it with the boys as well, it is going to be a great occasion and hopefully we can do something special.”

Appearances in finals have been at a premium these past few years for Quins, with only five in the past 10 years. As one of England’s most famous sides, it could be argued that supporters may have felt short changed or that the playing group didn’t have what it took to get there.

The nature of professional sport is that people come and go, but at Harlequins there are still some who remember those glory days.

Whether it is Care and Marler or even the likes of Nick Evans and Jordan Turner-Hall who are now coaches, Lewies says that it is the weeks gone by that he has asked those former heroes to tell their stories, keeping those tales in the back of their minds for the foreseeable future.

“Three weeks ago we had a chat around it,” Lewies said. “Danny (Care) stood in front of the team, told the team what it means for him personally and then you have the likes of Nick Evans still here.

“Jordan Turner-Hall was involved, so every now and then they would just drop in what it meant to them back then, but three weeks ago before the playoff we had a big chat around it. I don’t think we will chat about it again, but it will be in the backs of our minds.”