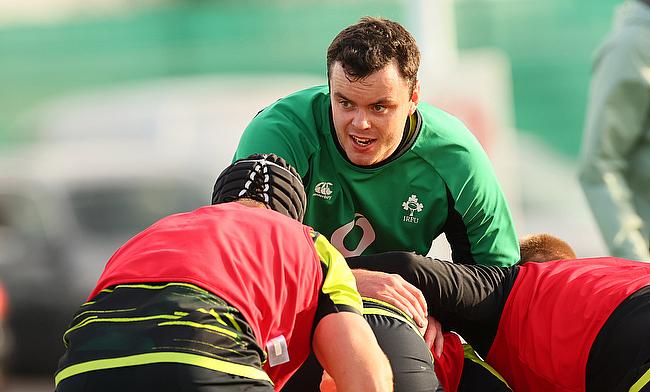 “Build the team around Itoje and Owen Farrell and let’s see some real consistency in selection – that is key to international success at the very top table.”

Sir Clive Woodward knows all about ‘success.’ The former World Cup winning head coach penned the above sentence in his latest column for the Daily Mail following England’s routine win over Georgia in the Autumn Nations Cup.

Last Saturday, Eddie Jones’ side prioritised the result over the performance at Twickenham but you tend to agree with Woodward when he mentions Maro Itoje being a linchpin for England moving forward.

Since making his international debut in 2016, the Saracens man has won 75 per cent of his Test matches. Over that period, Itoje has been one of Jones’ trusted lieutenants and his recent displays in an England shirt have strengthened Woodward’s claim.

In a good sense of the word, Itoje was a menace against Italy as Jones’ side battled their way to the Six Nations title at the end of October and last weekend, England’s defensive enforcer was shifted from the second-row to blindside flanker, where he was solid in all departments.

Clinical, ruthless performance from @EnglandRugby today at an eerily quiet Twickenham. Not perfect but it’s hard to be in those conditions. @J_George2 the hat-trick and my personal hero, @maroitoje is different level & big shout out to @jackswillis7 try on debut. Congrats ??

Jones will continue to explore different options during this World Cup cycle, but the importance of Itoje to the national side, wherever he is deployed, can’t be denied. A player with four Premiership titles, three European Cups and three Six Nations crowns to his name may well be the cornerstone for any success England experience between now and France 2023.

England’s evolution to become ‘the greatest team the world has ever seen’ continues this weekend when they face Ireland in the second batch of Autumn Nations Cup fixtures and whilst there is a fervour around Itoje - with the Lions tour to South Africa also edging in to view - the spotlight is arguably on his future partnerships in the second-row.

Itoje has frequently operated with Courtney Lawes and George Kruis during his England career, but with the former nursing an ankle injury and the latter now plying his trade in Japan, a vacancy has appeared in the lock position.

The ever-reliable Joe Launchbury and the impressive Charlie Ewels were in the engine room against Georgia, but the arrival of Exeter Chiefs’ Jonny Hill into the England set-up could be the answer Jones is looking for.

“We needed to find a big tall, strong lock to replace Georgie Kruis who has been an outstanding member of our team,” Jones said of Hill’s selection. “Jonny has been doing that job for Exeter. He’s got a great worth ethic and he’s a really fine example of what Exeter have produced.”

Hill has been named on the bench for Saturday's meeting with Ireland, but he did make his international debut against Italy alongside Itoje and there are already some early parallels between the pair when it comes to collecting silverware.

In the year in which Itoje made his England bow, he won the Six Nations title as well as the Premiership and the Champions Cup, something which Hill has replicated.

Whilst Itoje’s haul of trophies occurred across a two-month period, Hill recently lifted three major titles in as many weeks as Exeter and England turned their dreams into a reality.

The objective for the lock forward is to now nail down his position in the international side having been a key member of the Chiefs’ powerful pack in 2019-20. Alongside his 10 tries for Exeter, Hill made 257 tackles in all competitions last season - with a success rate of 89 per cent in the Premiership - and he also carried extremely well for the double-winners.

Hill’s consistent performances, combined with the recent notable additions to his CV, suggest the 26-year-old merits a regular starting berth in the national side (despite being named amongst the 'finishers' on Saturday) and with the Lions tour just seven months away, is it feasible for the Exeter man to form a sustainable partnership with Itoje on both fronts?

“The season that Jonny has had for Exeter has been excellent and he has brought that form into the group,” said England forwards coach Matt Proudfoot. “He offers us something different at the moment that we might feel will be an asset for us this week.

Time will tell to see whether Hill can integrate himself into the international environment but for Itoje, he has been tipped by former Lions skipper Sam Warburton to lead the side against the world champions.

In 2017, the Saracens lock joined forces with the indestructible Alun Wyn-Jones in two of the Lions' three Test matches with New Zealand but will there be a changing of the guard against the Springboks next summer?

Itoje's opposite number on Saturday, James Ryan, is favourite to partner the 26-year-old in South Africa. For the last couple of years, conversations around squad selection for the Lions have invariably paired the two together in the engine room and there is a good reason for that.

??? Choosing his backroom staff
?? Using the Six Nations as a gauge
?? Selecting a captain

It is just under eight months until the British & Irish Lions begin their South Africa tour so what is on Warren Gatland's checklist between now and then? #SA2021 https://t.co/JCI4CBlYTD pic.twitter.com/niLpRFbGiP

To begin with, the 24-year-old will captain his country for the first time at the weekend and like Itoje, and even Hill, Ryan’s meteoric rise has also been bookmarked by a flurry of silverware. 2018 was a special year for the towering lock as he was part of an Ireland side which clinched the Six Nations Grand Slam before he lifted both the Pro14 and the Champions Cup titles with Leinster.

Ryan addressed the media on Tuesday ahead of the latest milestone in his career and, inevitably, he was asked about Itoje: “He’s a serious player,” he said. “A real all-round second row. They [England] have got some serious players across their pack. We want to test ourselves against some of the best players in the world.”

Whilst full of praise for his opponent, Ryan almost has an identical win percentage to Itoje when representing his national side (75.86%) and similarly to the Saracens forward, he plays a vital role Ireland's pack and defensive line.

For now, Ryan will only be focused on relishing the opportunity to enhance his leadership skills at Twickenham on Saturday afternoon, but in terms of Itoje, calls for him to skipper the Lions next summer are continuing to grow. “He’s the world’s best lock,” added Woodward in his column.

Sir Clive is right – and since his international debut four years ago, Itoje’s performance levels have continued on an upward trajectory.

His spot on the plane to South Africa seems almost certain, but for Ryan and Hill, the remaining Autumn Nations Cup fixtures - combined with next year’s Six Nations - will present them with a chance to catch Warren Gatland’s eye as they aim to potentially follow in Itoje’s footsteps once again.