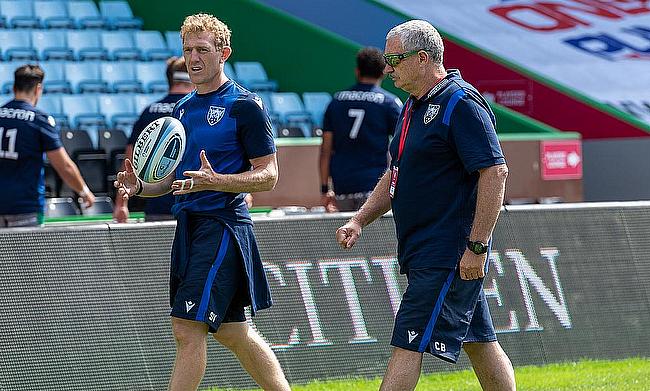 If you were wondering how Northampton Saints are feeling about the start of a new era, then here is your answer.

"I think continuity is a big part of achieving the success we are so desperately craving and that gives us a lot of confidence for this transition."

Those were the words of Saints chief executive Mark Darbon after the club announced current Director of Rugby Chris Boyd will be leaving the club at the end of the season.

Boyd will be returning home to New Zealand to be closer to his family, but will continue to work with the Midlands outfit in a consultancy capacity.

Current Northampton coaches Phil Dowson and Sam Vesty will take on senior management roles for the 2022/23 Gallagher Premiership campaign with the former stepping into the Director of Rugby hot-seat.

Chris Boyd has loved his time in Northampton, but says this summer is the right time for him to head home. pic.twitter.com/FDlihhAwH1

"Covid was the factor," Boyd said when asked about his decision to depart the club. "I’ve only seen my own kids once in four years. If I wanted to get home now, I couldn’t. I still can’t get into my own country because only citizens are allowed there and it’s on a strict ballot system.

"There are 50,000 people trying to get into 1,500 spots continually. That’s been tough and it’s only been made sustainable by the fact that we’ve enjoyed our time here, albeit with our wings clipped in terms of doing the things you’d like to do around the rugby. It’s balanced out the downside, otherwise we’d have probably gone home after three years."

Boyd has been in charge at cinch Stadium at Franklin's Gardens since 2018 and he will leave Northampton in a better state than when he first arrived. The Saints were on the slide after a ninth place finish in the Premiership, but the now 63-year-old instantly guided the club back to the top four whilst playing a free-flowing and creative style of rugby.

It is clear Boyd has had an impact on the vision of Northampton - not least with the amount of homegrown players he has handed opportunities to - and when that significant influence is reduced or taken away completely, it can leave clubs in the balance and fans possibly fearing the worst.

However, on Wednesday's press call, there was an admirable air of confidence from the Saints due to the fact they are promoting from within and Darbon revealed the step up for Dowson and Vesty, in particular, was always part of 'Plan A.'

"I think it is interesting thinking back on the journey over the last few years," he said. "I remember in the very first conversation I had with Chris, we talked about building a high potential group of coaches with an ambition of having them in a position to take over at the point in which Chris left.

"We knew that day would come at some point so quite early in Chris’ tenure, we set about recruiting that team. Phil Dowson was already involved at the club at that stage, but we brought in Sam Vesty, we brought in Ian Vass, we brought in Matt Ferguson. We talked about upskilling that group and preparing them for the moment when Chris left so we have had this long term plan. That has always been Plan A.

"We have got to the point where we feel really excited about their ability to step up. We think those guys have got fantastic capability."

Dowson, along with Vesty, will be the latest young, English coaches to take on top jobs at Premiership clubs. Lee Blackett (Wasps), George Skvington (Gloucester), Alex Sanderson (Sale Sharks) and Steve Borthwick (Leicester Tigers) have all had a positive impact on their respective teams and it is blueprint which is spreading across the top-flight.

However, Darbon was keen to stress this has been Northampton's next step all along: "When we have made those choices, we have looked at people who were high potential who we thought could grow and develop. Not necessarily the finished article there and then, but with growth and opportunity for the future.

"My view is that there is always very different circumstances in different clubs. We, of course, have looked at the market and considered our alternatives as we have built this plan. We were very clear on the individuals we wanted to be part of our set up and how that may evolve over time.

"We have always had this plan, but you do have to be quite careful not to blindly follow on a plan if it is no longer relevant and no longer right. We feel excited because we think we have made good choices on our coaching group and we think now is an appropriate time to step up.

"Broadly, we see ourselves as a bit of a development club. At the same time, make no bones about it, we want a structure and people in place that we think can lead us to success and based on where we are right now, we think this is the right model. We are promoting from within, we are promoting a relatively young group but we are doing so in a very stable environment."

?? "It has completely changed my whole dynamic of how I look at rugby..."@gloucesterrugby centurion @Freddie_Clarke spoke to TRU about his new responsibilities in the team ahead of a Boxing Day trip to Bath ????

That 'promotion from within' element is the key difference when you compare the changes we have seen at clubs like Leicester and Gloucester, for example.

Both teams opted for a completely fresh start in terms of personnel and now they are currently occupying spots in the top four.

From the outside, Dowson seems to be an ideal fit if Northampton are to take the next step. Boyd admits there is still "unfinished business" in his remaining months in charge as the Saints look to progress both domestically and on the continent, but his successor knows all about bringing silverware back to the Gardens.

Dowson was part of the last Northampton team to win the title back in 2014 and he also lifted the Challenge Cup in the same season. 186 appearances in Black, Green and Gold should speak volumes of how the 40-year-old is already thought of within Saints circles and current skipper Lewis Ludlam is hoping the 'new era' can bring the good times back to the club.

"It's really exciting to see Dows and Sam Vesty step up," Ludlam, who also paid tribute to Boyd's influence on his career, said. "Dows was here in my first season and he's someone who bleeds green, who knows what this club is about and who has played an unbelievable amount of times for the club.

"I can't really think of a better bloke to take the role. He's very similar to how he was as a player. He's very emotional, speaks really well, he's very detailed in what he does and he's extremely committed to what he does.

"There's no one as committed as what Dows is. He's a fantastic guy for the role and having seen him since my first year here, he's a role model as well. To be able to say he's going to be the boss is something that's really exciting on behalf of all the boys."

That "excitement' which the England international refers to is something which Northampton may look to harness as the clock ticks down on Boyd's tenure.

With a huge clash against Ulster to come in the Champions Cup, their European hopes are in balance, but their recent performances in the Premiership could give Northampton confidence ahead of Sunday's clash.

There are a few questions on the pitch which need to be answered during the second half of this season for the Saints, but what is clear is they are confident that they have the right structure and model in place when the curtain comes down on Boyd's reign.