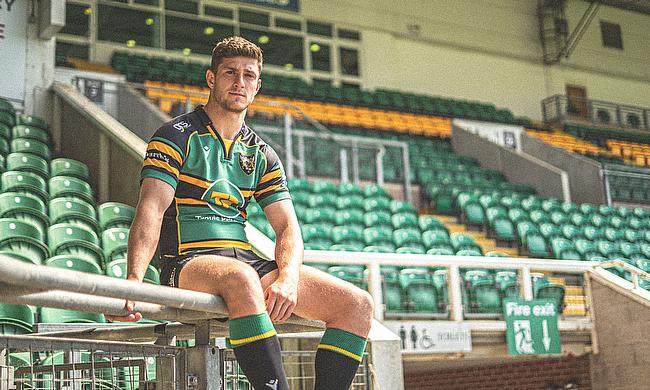 In front of 15,000 fans at cinch Stadium at Franklin’s Gardens, Northampton Saints were well beaten by their bitter rivals Leicester Tigers in the East Midlands derby.

Conceding 55 points and mustering 26 of their own, Chris Boyd’s side occupy fourth spot in the Premiership table, whilst Leicester sit top of the pile. Much of the work for Tigers was done by halftime, with tries from Nemani Nadolo, Francois van Wyk and Julian Montoya giving Steve Borthwick’s team a commanding lead.

Introduced to the game at the break - with Wales’ Dan Biggar leaving the action ahead of his international commitments - James Grayson presided over Northampton’s second-half resurgence, converting three tries, but his team ultimately fell short.

“It was tremendously disappointing,” Grayson told TRU, “especially on our own patch in front of our faithful fans, who spend their hard-earned money to come and watch us on Saturdays.

“It wasn’t what we wanted to put on the pitch. We were slow to start. We didn’t get any of our DNA on the pitch in terms of the way we try and play the game. Our kick-chase, our defence and our physicality was off the pace, so it was just really disappointing to be honest.

?? “We need to make the defeat to Tigers a turning point where we excel from here.”@FraserDingwall_ has called on Saints to find a reaction to Saturday’s Derby disappointment.

“Rugby is a great game because you get the chance week after week to bounce back. It is quite easy to get in a rut, but it is also quite easy to get out of one by putting a good performance in (the next game).”

So far this season, Northampton have played a quick game and to date, their philosophy has only been undone on two occasions.

Picking up wins against Gloucester, Exeter Chiefs and London Irish to open up the season, the East Midlanders experienced defeat for the first time at Wasps. However a week later, they returned to their try-scoring best with a 66-10 victory over Worcester.

It would be fair to suggest the setback against a high-flying Leicester was very much a step away from the Saints we have become accustomed to seeing this term. Not making the Premiership play-offs since 2018/19, the team has already shown they can play post-season rugby but will be aware of how competitive the top-flight is this season.

With one round of Premiership Rugby still to come before two weekends of Premiership Cup action, Northampton’s challenge for their upcoming clash with Sale has been made all the more difficult with plenty of first-team players on international duty.

Lewis Ludlam and Tommy Freeman have been released ahead of this weekend’s game against Tonga, meaning there will be reinforcements for Boyd’s team, but the list of unavailable players runs long.

On Tuesday, Nick Auterac was called up by Gregor Townsend’s Scotland following injury to Rory Sutherland and the Fijian trio of Sam Matavesi, Api Ratuniyarawa and Frank Lomani will play Spain, Wales and Georgia, respectively.

Dan Biggar will also be representing Wales, meaning 10 regulars will be absent for Northampton. This is, of course, a problem that all teams must contend with at this time of the year, and Grayson feels Saints’ style of rugby allows many of his teammates to get international nods.

“Apart from being talented rugby players – because at the end of the day, talent shines through – I think the fact that we play a good brand of rugby, that we try and move the ball to space and create opportunities, it probably highlights those players’ talents even more than if they were at another club,” the 23-year-old explained.

“Aside from that, I don’t really know. I think the way Sam Vesty, Dows (Phil Dowson) and Vassy (Ian Vass) try to get us playing aids the way that Eddie might look at us. I don’t know, but it is a good number on international duty. Whatever we are doing is working.”

An away fixture to Sale this weekend is something of a trip home for Grayson. Whilst his father, Paul, might have spent his entire professional career with Saints, he hails from Chorley in Lancashire.

Turning out for Preston Grasshoppers and Waterloo during his time in the North West, there are still strong roots in the region for the Grayson family and all eyes will be on the AJ Bell on Saturday afternoon.

Sale Sharks are certainly on the hunt for a win. They currently sit tenth in the table, picking up only two victories so far this season and they will be itching for a reaction after losing 27-14 against Worcester Warriors last time out.

“I think we are both licking our wounds a little bit after our hidings at the weekend,” Grayson said. “Both teams will be a bit frustrated with how they have performed in recent weeks, and it is a good chance for both sides to try and bounce back.

“It is going to be a good challenge. They are pretty uncompromising in the way they play, they are direct, physical, they have got some big boys and it is about barring up and making sure that we are physically and emotionally ready.”