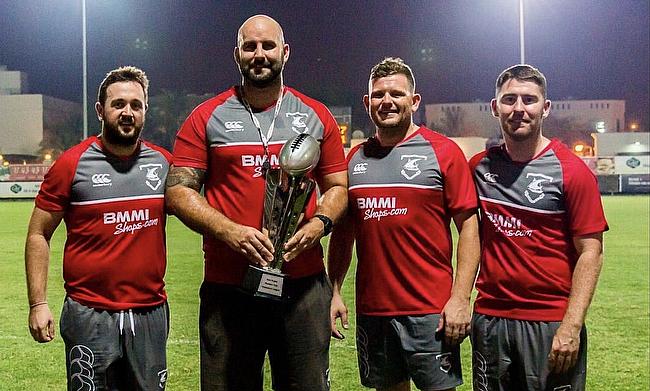 Luke Northmore: Cardiff Met have made this dream become a reality
Cardiff University 'stand to reap the rewards', says Davies
Cardiff have 'turned a corner' ahead of derby clash says Davies
Alex Dombrandt: My time at Cardiff Met made ‘perfect’ move to Harlequins happen

“They’re like academies now. They have an extra 10 or 12 academies in the UK that are churning out professional players,” Louie Tonkin started.

Currently the head of Bahrain Rugby Club, Tonkin cut his teeth in his native Wales and was the Head of Rugby at Cardiff University prior to his move to the Middle East.

Close friends with Alun Wyn Davies, who recently stepped down as the Head of Rugby at Cardiff University, Tonkin believes that his friend and former colleague did an admirable job with the side on their maiden voyage into BUCS Super Rugby.

“Alun has done a fantastic job. Going into that league and not only staying up but performing like they did after Christmas was very impressive and a huge testament to him, David Lakin and the guys working hard on that programme.”

An interview with DoR Alun Wyn Davies on why Cardiff fully deserve their place at university rugby’s top table after an excellent debut season in #BUCSSuperRugby.https://t.co/XviHDXn6M5 pic.twitter.com/k5o9mmNC7O

With Swansea University joining the division next season, Tonkin hopes that the Welsh Rugby Union will identify BUCS as a way to develop players for senior professional rugby, in contrast to when the former lock was coaching at Cardiff.

“It was made very clear to us that whilst BUCS was a big part of the English rugby pathway, it wasn’t part of the Welsh Rugby Union’s pathway. I hope for the three big universities in that league, the WRU will wake up and start to invest in them a little bit, because they are on an unfair playing field unfortunately.”

Not forgetting his university rugby roots upon leaving the UK in 2016 for sunnier climes, Tonkin recruited heavily in some of the young talent that shone on the BUCS stage: “I think 18 of our squad last year came from BUCS Super Rugby, or the equivalent before that.

“They’ve come from Exeter, there is a big Hartpury College contingent and a large contingent from Cardiff University are out here too so that has been a big recruitment pool for us, largely because they are well-rounded young men,” Tonkin said.

“They have got great academic CV’s, great degrees and they’re also great rugby players. It sets them up really, really well for bigger things later in life

“We were looking for players that wanted to pursue their professional development, whether it be engineering or something else, but to also get some life experience and play some semi-professional rugby abroad which we have done quite successfully in the last two years especially.

“We’ve had some great recruits and these guys will be out in the Middle East now for five or six years probably by earning a few quid from their jobs and now playing a good standard of rugby. It is quite a good experience for them really.”

With the need for specialist professionals in the Middle East and the Gulf, it is an attractive proposition for many young professionals, with Tonkin firmly believing that it is a viable option for many players that want to use their degree and still play a high standard of rugby.

“If you are not getting the opportunities you think you deserve in your respective countries, if you have just got out of uni, use that skillset to help you travel the world and experience things,” Tonkin added. “There is no doubt that that you will probably end up going back to your home country at some stage.

“It is not about poaching these players, stopping them from having an impact on things in their home country, it is about making these individuals more well-rounded. Giving them life experience, they personally develop and come back as better people.

“I know it sounds a bit cheesy, but that is the case. You go away as a 21-year-old and you’ll come back as a 25-year-old, highly experienced both culturally and professionally too.”

Recommended to the club by a friend, Tonkin moved to Bahrain as their first ever full-time coach, ending the player-led coaching that hadn’t yielded any silverware for eight years.

“We had the opportunity to come in and restructure everything really and build it from scratch. We had a successful first year when we didn’t win anything, but the last two years have been very successful,” he said.

“It wouldn’t be wrong to say that we are the dominant force in the region out here now and hopefully that can continue long after I am gone.”

His first West Asia Premiership win will be Tonkin’s last with the club, following on from securing the West Asia Cup in the 36-year old’s second year at the club. His sides 23-21 win over the Dubai Exiles proceeds a move back to the United Kingdom to take up a coaching role with the Exeter Chiefs Senior Academy and the Welshman says that the opportunity to work with the Premiership juggernauts was too good to turn down.

“I have respected what they have done from the very beginning. When they got promoted from the Championship years ago, the way that they did that, kept their squad together and recruited really well.” Tonkin added.

“I just respect their values. From the outside looking in, it all looked very impressive and when I went there for my interview, I was blown away by the professionalism of it all.”

Having been the Head Coach at Pontypool and Carmarthen, Tonkin believes that his move to the relative unknown in Bahrain helped him as a coach as he prepares for life in Exeter: “No one really knows about rugby in the Middle East or the Gulf, but as an individual, how I carry myself now, the experiences that I’ve had and the teams I have led have been successful ones.

“Bahrain was no exception to that, so that was obviously a positive. It is more about me improving as an individual really and it has given me a much more well-rounded coaching philosophy about the game and I am really clear now about how I want to take my career forward.”