Luke Northmore: Cardiff Met have made this dream become a reality 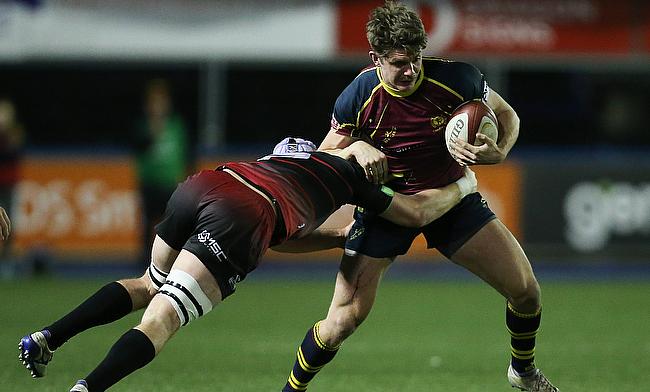 Exeter, Hartpury, Bath and Beckett progress after thrilling BUCS Super Rugby quarter-finals
Bath’s Tom Dunn: ‘My advice would be to grab university rugby by both hands and run with it’
Cardiff Met can't look too far ahead, says Northmore
Alex Dombrandt: My time at Cardiff Met made ‘perfect’ move to Harlequins happen

Luke Northmore is reflecting on the moment he found out Alex Dombrandt had secured his first professional contract. His good friend had signed for Harlequins and was about to take the step into the Gallagher Premiership.

That was almost exactly a year ago and 12 months on, the spotlight has shifted in the direction of Northmore.

The 22-year-old is the latest young player to progress from university rugby into the professional game and at the end of last week, it was announced Northmore would be following Dombrandt to Quins for the 2019/20 season as his time with Cardiff Met University draws to a conclusion.

“When Alex first told me, we were just strolling around Tesco doing a food shop!” says the centre who enrolled at Cardiff Met in 2016.

“He just dropped it in subtly! I was gobsmacked, but it was always expected from a player like Domers. He has only excelled since he has been at Quins and he has opened up a pathway for a lot of players in university rugby to go on and take that higher level.

“Knowing that Alex is down there, that is his neck of the woods. He knows London like the back of his hand and it’s going to be easier for me to settle in when I join next season.

“I’m sure he and the rest of the squad will make me feel welcome considering I have only been to London a handful of times! Alex certainly had an impact on helping me make the decision to join Harlequins and I have to thank him for that.”

Quins certainly generated a buzz on social media last week. The Premiership club signed 12 players, including Northmore and former University of Exeter captain Tom Lawday, and there was no shortage of congratulatory tweets for the Cardiff Met man.

“The last couple of months have been a bit surreal finalising everything and knowing I am going to be going to such a prestigious club, but I am really chuffed,” Northmore says.

“The amount of support that came back from people wishing me well and welcoming me to Quins was astonishing!”

In truth, there is nothing astonishing about Northmore’s move into the Premiership. He has been an integral part of Cardiff Met’s recent development and has certainly impressed during his time at the university.

In the absence of Dombrandt, Northmore has had another strong season this year in BUCS Super Rugby and both players are now the forerunners for the rugby programme at Cardiff Met. While praise was heaped on Northmore across social media last Friday, the young back sent a single tweet to thank his coaches at the university for ‘making a dream become a reality.’

“They [Cardiff Met] have been massive,” he says. “They have made this dream come true. I lived in Devon in a small town before university and never had any real aspirations about rugby so to now be able to turn around and say I am going to be a professional rugby player, is all down to them.

“I think the way Cardiff Met has approached all aspects of life in terms of going to university and getting your studies, as well as playing top end quality rugby, just highlights their professional standards.

“The work they have put in has helped me get here and I can’t thank my coaches and everyone involved with the club enough. They have made this dream become a reality, I suppose.”

"The dream is coming true"

"I never thought I'd be able to say that I could be a professional rugby player" pic.twitter.com/fGYL5836LX

Key figures such as Cardiff Met Director of Rugby Danny Milton, as well as coaches Ian Gardner and Chris Davey, have been influential in Northmore’s progress but the next person to guide him in the right direction will be Paul Gustard.

Northmore initially met the Quins’ Head of Rugby at the beginning of February and instantly, he was impressed by his vision for the club. “The first time I spoke with Paul, he was really complementary of how he viewed me as a player and where he thinks I can progress,” Northmore continues.

“We had a meeting and he kindly came all the way to Cardiff with Ed [Spokes] the recruitment manager at Harlequins. We had a really good, long chat and they explained how they view the club in terms of the direction it is going and their aspirations.

“It just opened up masses of appreciation to be able to be going to such a big club.”

The immediate aim for Northmore is to complete his Sports Conditioning, Rehabilitation and Massage degree before turning his attention back to rugby.

The centre didn’t feature in Cardiff Met’s BUCS Super Rugby quarter-final defeat against Leeds Beckett last week after having surgery on a thumb injury which has kept him sidelined for the rest of the season.

Once he is out of his cast, Northmore will be looking to return to fitness before packing his bags for London to join a Harlequins side which has taken major strides under Gustard this term.

Despite back to back defeats against Gloucester and Saracens, Quins currently occupy a spot in the top four of the Premiership and Northmore is relishing being part of the set-up at the Stoop.

“Harlequins has always been a big club and as you can see through the results, they have really had a positive approach to this year,” says Northmore. “They have been sitting in midtable for the last couple of years, but they have really progressed.

“Paul has big aspirations. That was the main thing he preached to me when we first met and the steps that he wants to take forward. Everyone seems to be singing off the same hymn sheet so I can’t wait to get down there and get involved in that environment.”

Twelve months after seeing his friend Dombrandt enter the Premiership, it is now Northmore’s turn to follow suit.