Cardiff have 'turned a corner' ahead of derby clash says Davies 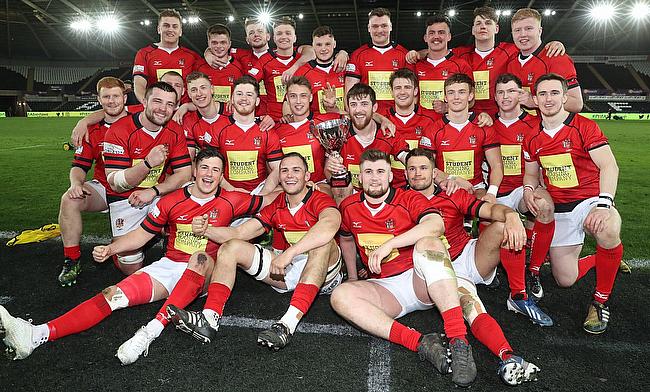 James Davies admits Cardiff University did begin to have doubts about whether their first BUCS Super Rugby win would ever come.

Following promotion into the top tier, the Welsh side lost their first seven games, but their drought came to an end last month.

Home victories over Northumbria University and Leeds Beckett University means Cardiff are off the foot of the table and Alun-Wyn Davies’ side have breathed new life into their season.

“We have taken massive confidence from our wins,” Davies told TRU.

“We did start to doubt whether a victory would ever come because we went the first seven games without a win.

Cardiff University Director of Rugby @alundaves007 described his side as a "plane on the runway" earlier in the season, but they certainly took off on Wednesday after claiming their first win...

“But as soon as we got that first win against Northumbria, it does feel like we have now turned a corner because we now have guys returning from injury and we are adapting to the fast-paced nature of this league.”

After shipping 30 or more points in six of their opening seven matches, Cardiff have certainly improved defensively and Davies says it’s all been part of the learning process in BUCS Super Rugby.

“I think Alun-Wyn [Davies] is very proud about his defence so I think in those two wins, the foundations were laid upon our defence,” he said.

“In our two wins, we managed to keep Northumbria to two tries and they are one of the most dangerous attacks in the league and we held Beckett to three points so that is an area which we are really improving on.”

This week, Cardiff will be aiming for revenge against their rivals Cardiff Met after falling to a defeat in the first derby of the season.

Danny Milton’s men triumphed 31-17 back in October, but Davies insists his side are now a different proposition.

“Last time, we did play well against Met, but it also showed what this league can do,” said Davies. “Any mistake you make will be punished and I think that wasn’t what we were really expecting.

As for the fans, we think it was close, but the Archers edged it with "Shoes off if you love the MET"

“We have changed the way we play since then. I think that first game against Met, we looked at it and we felt that we were a bit too open and we tried to play them at their own game.

“I think we are now starting to impose our style on the league. There does feel like there is a lot of momentum and belief in the squad and we are really looking forward to playing on Wednesday.”

While Cardiff come into this derby having won two of their last three games, Met are currently level on points with BUCS Super Rugby leaders Hartpury having lost just once since the end of October.

However, despite the excellent form of last season’s BUCS Super Rugby Championship finalists, Davies says Cardiff are purely focused on themselves as they prepare for another special night at Arms Park.

He added: “These are the games you love playing in. In front of a big crowd, it’s a local derby and it should be a really good occasion. Form kind of goes out of the window in these games and it’s about who can keep their heads on the day and I am hoping we can.

“In the last few weeks, we haven’t really looked at other teams. We have focused on the performance of ourselves and the results have started to come. Met are a really good side, but we are a side that feels like it has turned a corner.

“We have got a lot of boys back fit now and we have got close to a full-strength side going to the Arms Park on Wednesday so I wouldn’t be surprised if we can get a result.”

Also in BUCS Super Rugby this week, table toppers Hartpury travel to the University of Bath, third-placed Exeter will be looking to return to winning ways when they take on Nottingham Trent while Durham host Northumbria and Loughborough go to Leeds Beckett.