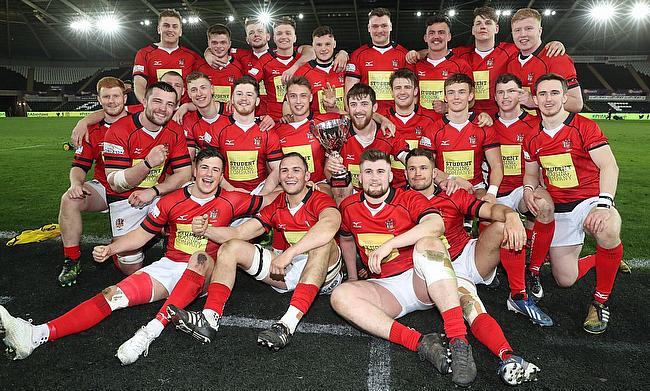 Bath’s Tom Dunn: ‘My advice would be to grab university rugby by both hands and run with it’
University of Bath topple Exeter to send title race to the wire
Cardiff have 'turned a corner' ahead of derby clash says Davies
Cardiff University beat Northumbria to end winless run

Director of Rugby Alun Wyn Davies has saluted the attitude and work rate of his Cardiff University players.

After a slow start to life in the top tier, following promotion from South A, Cardiff now require just one point from their final domestic fixture against the University of Exeter on Wednesday to clinch a quarter-final spot.

“The players have worked so hard all year and they stand to reap the rewards from it,” Davies said.

“Our biggest objective was to stay in the league. Everyone wrote us off saying ‘you will come up and go down' because of our budget and player depth, but you adapt and overcome things and we have done that.”

Check out our best moments from Wednesdays win on the road against @LboroRugby so chuffed for the boys how hard they have fought this year in the first year of Super Rugby @_BucsStopsHere @BUCSSuperRugby #BUCSSuperRugby #Universityrugby @CardiffUniSport pic.twitter.com/oxxdGd0ywJ

Davies revealed a lot of emphasis has been on the Cardiff players to ‘take ownership’ and that seems to have played a part in their excellent debut season in BUCS Super Rugby.

He also admitted he’s had to adapt as a coach, but feels the player led philosophy has brought the best out of his squad.

“We give a lot of ownership to our players," Davies added. "If they don’t want to play a certain way, they aren’t going to buy into it so that is really important.

“A month before Christmas, we did a big handover. We have a ‘leadership’ group of three captains. They sit with me on a Monday. I then go across what I would like them to deliver and they also give me clips that they want to deliver on.

“That was hard to do as a coach letting the players dictate, but it is something we wanted to do. We have not got a sports degree at the university, but we have got guys who think. You have to breed that culture of those guys wanting to work things out for themselves and I feel as though they have done that.”

Cardiff took a huge step towards the play-offs last Wednesday as Davies’ side produced an excellent performance against rivals Loughborough.

While Davies believes Cardiff’s crucial victory in the Midlands was a highlight this term, there are two other results which also standout for him.

“I would say our pressure game was the week before against Nottingham Trent,” Davies said

“They brought down a very strong team, but we dealt with it. I think the Leeds Beckett game [a 30-3 win back in December] was up there too. I think that performance showed the guys deserve to be in this league.

“The game against Loughborough was a big game. I was more pleased with the first half because people could see what we have been doing. It was pleasing to see that we do play an expansive game and it was a big win on the road. We hadn’t won on the road so it is up there for us.”

In their final league game of the season, Cardiff are on their travels once again as they prepare to face title-chasing Exeter at Topsham.

Just one win separates Exeter from back-to-back league titles. Can they do it? There's only one way to find out... ??

Keith Fleming’s men lost to Bath last week, but they can wrap up the domestic trophy for a second year running if they beat Cardiff. Asked about their trip to Exeter, Davies said: “We will be going down there and we will be looking to spoil the party, I guess!

“It’s a tough old place to go and I would imagine there is a hell of a lot of pressure from Keith on his players, but he will prepare them well. They have lost two on the bounce, but then again, they went to Hartpury and took them apart so you just don’t what they are going to roll out.

“For us, we are sat in eighth at the moment, but like I said in an interview last week, we control our own destiny. We row our own boat. We rowed our own boat to stay in the league and now it is not down to other people’s results.”

Just a single point from Wednesday’s clash with Exeter will guarantee Cardiff a play-off place while closest rivals Loughborough must pick up a bonus-point win away at the University of Bath to stand any chance of sneaking into the top eight.

Mathematically, second-placed Bath can still win the title so there is a lot at stake as the domestic season draws to a conclusion.

For Cardiff, all the signs suggest they will reach the quarter-finals and Davies believes it would be a wonderful achievement in their first ever BUCS Super Rugby campaign.

What a win yesterday for @CardiffUni_RFC, these boys never give in and proven that they a force in this @BUCSSuperRugby league, couldn’t be prouder. Heart and guts and a lot of work behind the scenes by these players you can’t ask for a harder working group ??

He added: “We are going up against six-figure rugby programmes in this league. We haven’t got that. People think I am joking when I tell them what budget we have got!

“When it comes to that and then when you say it’s our first year in BUCS Super Rugby as well as the fact we lost a lot of guys on the cycle last year, I am massively proud of the players and the management.

“They have done something that everyone said we wouldn’t do and the support from the university has been crucial. Everyone sat back and said we would finish bottom. I do like proving people wrong. I always have been like that and I'm sure that has rubbed off on the players!

“We certainly haven’t celebrated the season yet, though. We still have a lot to do. We’ve ticked one box of staying up and the next opportunity now is to get to the quarter-finals.

“We have a basis now to grow. Hopefully we can recruit people who will see us and want to do a degree as well as join a good rugby programme. Hopefully from the outside looking in, we have achieved that.”