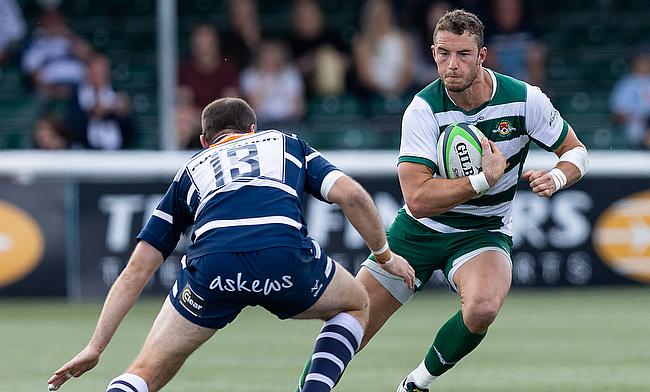 On Saturday afternoon, Ealing Trailfinders picked up their second trophy of the 2021/22 season as Ben Ward’s team overcame a stubborn Coventry Rugby side to claim a 19-13 victory.

Ending a season with two bits of silverware is an impressive feat, the team beating Ampthill and Cornish Pirates on their way to their Championship Cup triumph.

For Steven Shingler, it has been a doubly successful season, the playmaker not only an important part of Ealing’s efforts but also a little further south at Old Deer Park, where he coaches with London Welsh.

Across the competitions he was heavily involved with, he only experienced defeat on eight occasions - four times with Trailfinders and four times with the Exiles - but while London Welsh will be lining up in London & South East Premier next season after gaining promotion, Ealing Trailfinders will not be advancing up the rugby pyramid at the end of the summer.

Learning that the club wouldn’t be making their way to the top flight came in two blows. The first was the RFU and Premiership Rugby’s decision that both Ealing and Doncaster Knights had failed to reach the minimum standards criteria whilst the second setback saw the Trailfinders having to withdraw their appeal in April, just a couple of weeks after they confirmed top spot in the Championship.

Just a year ago, in a truncated second tier season, what stood between the club and the highest rung of the domestic ladder was a two-legged encounter with Saracens, whilst a global pandemic curtailed their hopes of promotion in the 2019/20 campaign.

“It is quite difficult not to feel hard done by as a club because we played the three-time European champions in a playoff game [last year], so that was pretty difficult,” Shingler told TRU.

“I think we would have backed ourselves if it was the usual scenario of the bottom team in the Premiership coming down, but we had to go and play the three-time European champs, who are probably hot favourites to win the Premiership this year.

“You can look at that and think Ealing have had quite a rough ride over the last two years. With my journey with the club, we have had one half season, one 10 game season and then the league season, which was full, we have won and haven’t gone up.”

In their statement confirming the withdrawal of their appeal, the club outlined their disappointment at being unable to take their “rightful place” in the Premiership and described the whole ordeal as a “frustrating process” at the end of a long season.

Such was the impressive nature of their performances, four first team regulars found their way into the Championship Clubs Podcast Team of the Season [Lewis Thiede, Bobby de Wee, Simon Uzokwe and Craig Hampson], with Ealing unsurprisingly having the most representatives in that particular XV.

With so many players having excelled in green and white, it leaves some asking questions about where they would stand against clubs in the division above.

“I think when you talk about people like Simon [Uzokwe] and people who have come down a level from the Premiership to the Championship, there is many reasons for doing that and a lot of the time it is for game time,” Shingler said.

“You want to prove that you are good enough to play regular rugby and once you do that, you give yourself the best chance of competing against the best players, and that would have been with promotion.

“We played against Gloucester in preseason, we won our game at home, we lost narrowly away [38-36] and they have gone on to be very good in the Premiership this year.

“You always think ‘I wonder what we are like?’, ‘I wonder what standard we would be in the Premiership?’, and unfortunately that has been taken away from us.”

For many, the conversation surrounding the RFU and the Premiership’s apparent ring-fencing of the top flight was intensified by some performances in the league.

A case in point was Bath’s recent 64-0 loss to Gloucester in the league and having been placed at the foot of the Premiership for some time now, it brought Stuart Hooper's team into the eye of the storm.

However, even if Bath’s dismal display did prompt a further conversation about the virtues of promotion and relegation, by that time, Ealing Trailfinders had already pulled their appeal from the table.

That same day, Shingler and his teammates were at Dillingham Park taking on Ampthill. Beating their hosts 31-21, then completing their quarter-final a weekend later with a 56-24 win in the second leg, Ben Ward’s side seemed to have ample motivation to do well in their secondary competition.

“I was still a little bit pissed off that we weren’t getting promoted to the Premiership,” Shingler said.

“I was probably still a little bit bitter at the start of it, and once we had played Ampthill away, Ampthill at home, and we were only two wins away from lifting silverware, to do the double, it was quite nice to do.

“It started off probably not motivated at all, and then it was actually ‘let’s go out and prove we are the champs’, and then we are double champions with resting 10 players from our squad.

“We probably proved the strength and depth that Ealing Trailfinders do have, and hopefully we can show that again next year.”

Even in the face of being unable to be promoted, there are positives to be found in West London. Some of this was highlighted last week by The Telegraph’s Charlie Morgan, who made his way to the Sports Ground to speak to those involved with the club and described how they are building a sustainable future.

With a partnership with Brunel University, should they gain promotion at the conclusion of next season, they will be among the country’s best in BUCS Super Rugby.

Elsewhere, you can look at the growing women’s section or that the club rent their facilities out to the local community throughout the week. It is a side that is growing organically, even if plenty will look to the club’s benefactor, Sir Mike Gooley, as the reason for their meteoric rise.

Now with some time off, Shingler and his teammates will be able to reflect on the last 12 months. For the Welshman, that means a return to Swansea for a few days to see his family.

Back in London, it is business as usual with Trailfinders already announcing new signings for next season with Ollie Fox [Bath], Danny Cutmore [Cornish Pirates] and Kevin O’Byrne [Munster] all on their way to the capital.

Even with the season now done and dusted, Shingler feels that his mindset will be very much the same.

“I’m quite a full-on person,” Shingler said. “I am very focused on rugby. I go back home, my brother [Aaron Shingler] plays for Scarlets, my dad asks about the rugby at Ealing, so the break is for the body.

“I’ll come back in. It will be a new lease of life, a few new boys, which always freshens things up and hopefully the club are still ambitious to go and do it. I know the squad are, so pretty much the goal at the start of the season is to go out and win it again.

“I don’t think there will be any sort of flirting around the idea of winning the competition, it will be ‘we are going to go and try to win this league’. It will just be up to the club and us to put us in a position to have a chance of cracking the Premiership.

“It is quite hard to win a league. I think we may be the only team in the Championship to have the ability to win the league twice, and that is certainly an aim.”