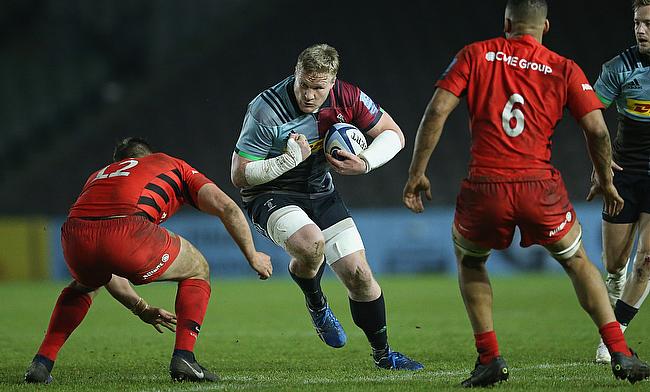 When Renaldo Bothma arrived on English shores in 2017, many could remember the loose forward as a hard runner in attack and a monstrous tackler from the Rugby World Cup two years prior.

Many expected the Namibian to settle into Premiership life with relative ease alongside the likes of Chris Robshaw, James Chisholm and Jack Clifford. The reality, however, was much different.

Breaking his arm three times at the start of his time with the club, Bothma describes the start of his Quins career as ‘bumpy’. During a lengthy recovery period, Bothma’s mind quite naturally wandered to think about what the future held for him after rugby finished for good.

“I started Botthms about a year ago, it is literally a brand that I started,” Bothma said, “Doesn’t have anything unique. They are very niche marketed products, I like doing the advertising, those kinds of things and that’s what I do, and I do spend a lot of time educating myself.

“I did a lot of courses on Google. I like the whole thing behind the business. People just see a product on a website, but I now know there is a lot more going on behind the scenes. I just want to get products in the market that can help rugby players, help the sport industry.

Get your hands on our grip socks today. SHOP NOW https://t.co/2cmtJnxaxd pic.twitter.com/P7JSTqkOP2

“I am not here to reinvent the wheel. The wheel has already been invented. I do still feel there are a lot of opportunities for us to bring out new products with a bit of spice, do something a bit different. Now I just want to grow the brand and keep on adding new products.”

With his products being worn by Harlequins teammates Gabriel Ibitoye, Marcus Smith, Brett Herron and Montpellier giant Nemani Nadolo, Botthms is already breaking through to the professional sporting market, with Bothma imploring that other professional players look to start looking at life after rugby sooner rather than later.

-Gambling after self-exclusion can be risky. If you're still looking for online betting or casino sites to enjoy, the experts behind https://top-canadiancasinos.com/50-free-spins have hand-selected the only safe gambling sites that have an international license-

“From a players perspective, it is a stressful job and it does get really tough in the last couple of seasons of your career and you need to start thinking about life after rugby,” Bothma said, “That impacts your career if you stress about it every day.

“You don’t know what you’re doing next year, you don’t know where you’re going to go. I’m from South Africa, I’m setup here in the UK and it is sometimes scary. But, if you are proactive with it and just having a good work life balance and you should take everything in, look at what you want to do and do it early. I think that is the most important thing.”

Having made 27 appearances in his three seasons with the West London club, Bothma hasn’t been seen out on the pitch as much as many would have liked. Restricted largely due to injury, Bothma believes that by starting his own business, it has made him feel far more comfortable about his eventual transition from professional rugby to working life.

“From my perspective, I need to keep my mind fresh,” Bothma said, “You have to deal with what life deals you. Injuries have been a great setback for me, and it has been hard. I did a couple of interviews after breaking my arm three times and it has been mentally challenging for me.

“But it has been a good learning curve for me. Starting my business, thinking about life after rugby, when you get to the end of your career, I don’t think rugby players do actually realise how challenging and how daunting the realisation of not having a contract in the next three or four months can be.

“Starting the business would not have been possible if I wasn’t a professional rugby player, if I had not been in the privileged position of earning a good salary and using my saved money to build a business.”