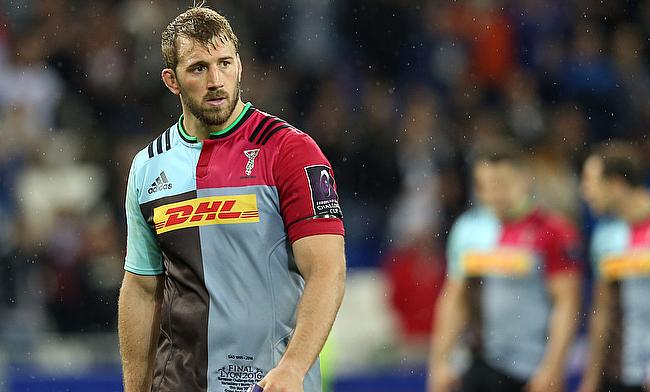 Harlequins have confirmed that former England captain Chris Robshaw will make his exit from the Gallagher Premiership club at the end of the ongoing season.

Robshaw has been with Harlequins since his professional rugby debut that came in 2005 and has racked up 289 appearances for the club since then. He also enjoyed Premiership title victory with the Quins in 2012 and has featured in 66 Tests for England between 2009 and 2018.

The 33-year-old captained England first in 2012 and also gone on to lead them during the 2015 World Cup following which he was replaced by Dylan Hartley as Eddie Jones took in charge of the side.

"As a boy, wearing my oversized Harlequins shirt, I could never have imagined I would be fortunate enough to play for the team I admired the most," said Robshaw in a statement on the club's website.

"Which is why it has been a particularly difficult decision for me to leave the club after 16 extraordinary years.

"I will be hanging up my Harlequins shirt at the end of the season. And though there is so much I will miss about playing for this team, I will always be eternally grateful and proud for having had the chance to stand alongside such extraordinary players.

"All the while, being supported by the best fans in the world.

"I would like to take this opportunity to thank all the coaches and everyone at Harlequins who have helped me achieve my dreams, the Harlequins Academy and my incredible teammates without whom none of this would have been possible.

"Despite all the intense training hours, and the emotional and physical demands of the job, it never felt like work. Putting on the Harlequins shirt will always remain the greatest privilege of my professional career.

"I also want to thank my friends, family and most importantly my wife Camilla who has always been my greatest supporter.

"I look forward to the next chapter in my life, and will keep you posted. But wherever I end up next, I will do my utmost to make you proud.

"The Stoop and Harlequins will always be my home. Let's enjoy the next few months."

According to reports, it is understood that Robshaw will be eyeing a stint in France or Japan.

Harlequins are positioned sixth in the Gallagher Premiership table with four wins from nine games and will face London Irish next at Twickenham Stoop on 15th February.