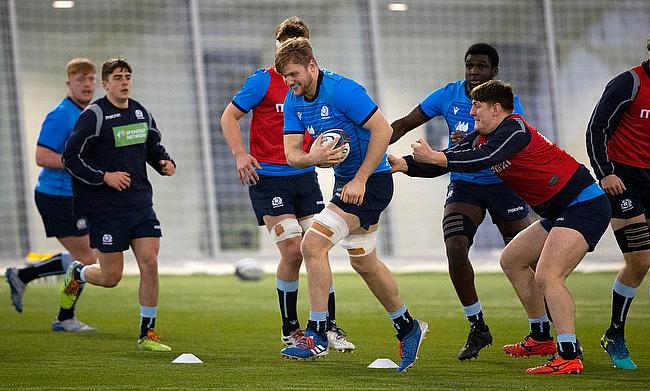 Cockerill had a “massive impact” on Ritchie’s career, now back-row wants to put one over on former mentor
Exclusive: New Scotland call-up Andy Christie on his journey to international rugby
'They were lovely phone calls to make': Edmunds and Davidson given chance with Scotland Sevens
“It feels like a dream”: Family members, Sandbach RUFC and Sandbach School react to Ashman’s Scotland debut

Away from the rugby field, up-and-coming Glasgow Warriors Academy second-row Max Williamson has been getting his teeth into a maths degree at Strathclyde University.

However on Friday evening, the only digits he will be thinking about will be the number of points Scotland under-20s can post against England in their age-grade Six Nations opener and how many people will be in the crowd.

The game takes place at the DAM Health Stadium in Edinburgh in the shadows of BT Murrayfield and, for all of the 23-man Scotland squad, it will be the first time they will have played in front of a fervent home support in an under-20s international.

That is, of course, because the entire 2021 tournament was played behind closed doors in Cardiff due to Covid whilst Scotland headed southwards undercooked.

The impact of the pandemic meant many of those involved had not played any senior rugby before those five games in a short, sharp period last summer.

In the end, the Scots lost five out of five, including a 31-12 defeat to England in round two which helped the latter to a Grand Slam.

As a result of their strength in depth, England will start as favourites for this 2022 round one tie in the Scottish capital, but they expect a tough match.

And 19-year-old Williamson, who played in all of the games last year, said: “Playing at home will be great because in Cardiff last year we didn’t play in front of anyone and having family and friends cheering us on this time will really help.

“They should be there in good numbers and when you are trying to get up off the ground after making a tackle or whatever, having that support behind you really does spur you on as a player.

“It would definitely be a real confidence booster for the rest of the tournament if we can put down a marker in this game and I know the guys who are returning want to help the squad do that.

“I think those of us back for a second year all feel a lot more comfortable in this environment and we have been training really well. I can see a noticeable difference in terms of the level we are training at. England are a good side, but we are looking forward to the challenge.”

Centre Munn and replacement Oguntibeju tipped to do well

Williamson, who came through the ranks at Stirling County and Dollar Academy, will take on England alongside some of the players returning from 2021 including loosehead prop Tom Banatvala, No.8 Ollie Leatherbarrow, stand-off Christian Townsend and replacement Euan Cunningham.

Of the new boys, head coach Kenny Murray - a new boy himself having only taken up the post recently - has spoken positively about 18-year-old Boroughmuir Bears centre Munn and Ealing Trailfinders 19-year-old second-row/back-row Oguntibeju who will come on as a replacement at some stage.

“Duncan played well in Super6, he is a smart young man, he is diligent and in meetings, he will ask questions and takes a lot of notes in his notebook,” the head coach said about the Loch Lomond product.

“His skillset is really good. He works hard in defence and his work rate to get back for any kick throughs and half line breaks is excellent.

“For him, it is just about getting used to the intensity of what will come on Friday night because he is still quite young, but it is a good centre pairing between him and Michael Gray.”

And on Oguntibeju - the Nigerian-born player who spent most of his latter teens in South Africa, but lived in Edinburgh from the age of two to 14  - Murray said:  “He has really caught the eye.

“He is a wee bit raw in terms of his rugby experience, but even in training over the last few days you can see that he is a guy who has real athleticism. He has a huge amount of energy and passion and defensively, he was getting off the line, he was wanting to ‘get into’ people and be physical and he looked really good.

“We are really excited about him. I think his potential is excellent. If we can work with him and improve parts of his game then he could be an excellent player.”

“I’m buzzing for it”

The team is captained by back-row Rhys Tait and the 19-year-old Glasgow Warriors Academy man from Hawick cannot wait for the game.

“After Kenny asked me to be captain I was really chuffed and then, thinking about the England game, I thought: ‘Jeez, that’s going to be mad’,” Tait explains.

“Running out in front of everyone at the DAM Health Stadium in this first game against England will be brilliant. I’m buzzing for it - I can’t wait to get stuck in.

Scotland captain @StuartWHOGG_ and Scotland U20 captain @rhys_tait both joined this week's Official Scottish Rugby Podcast, looking ahead to their respective matches this weekend.

“I was a little bit surprised to be asked to be captain, but we had a few internal games and games against a Scotland Select where I was lucky enough to captain and now I get the opportunity to do that in the tournament.

“I’m really honoured to have been asked by Kenny and I’m really looking forward to leading the boys. It was a young group last year and we did have a tough ride, but we can take that as a huge learning curve.

“Not managing to win wasn’t ideal, but a lot of those boys are coming back this year having been through that, so there is a real hunger to get stuck into this year’s Six Nations. Hopefully, we’ll do better.”