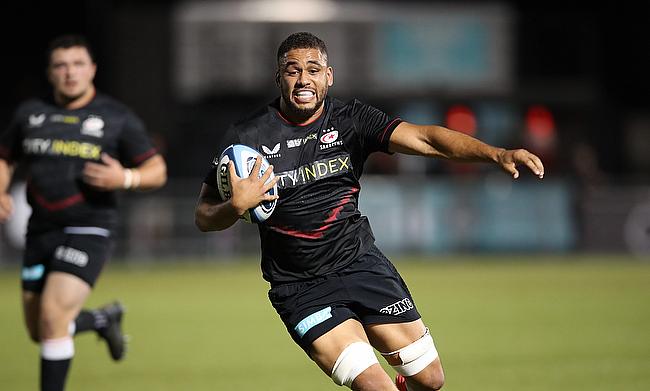 Timing in rugby, as much as it is in life, is everything. When arranging to speak to Andy Christie, there were no whispers of a maiden Scotland call-up, so when 14:00 on Wednesday rolled around, all pre-prepared questions went into the bin.

Naming five uncapped players in his 39-man squad for the upcoming Guinness Six Nations, Gregor Townsend’s selection of Christie caught the eye. At 22, the back rower has been making an impression for Saracens in the Gallagher Premiership, the academy product having become an increasingly relied upon asset for Mark McCall.

Preparing for a Challenge Cup clash with London Irish on Sunday afternoon, Christie will be riding a high off the back of his international call up, his meteoric rise having a seemingly endless trajectory.

Qualifying for Scotland thanks to his grandmother, there is still a hint of disbelief in Christie’s tone when speaking to TRU. Playing for both Scotland and England at age-grade level, it was Townsend who blinked first in order to capture the back-row’s attention, calling the players’ agent last week to arrange a meeting.

“I spoke to him (Townsend) on Monday, and he said ‘we’ve been keeping an eye on you, we think you have been going really well and would like to consider you for the Six Nations’,” Christie said.

“That was where he left it. He said they were deciding (the squad) on Tuesday, but that I was in the mix and I was being considered. I don’t like to think about those things all that much because I don’t like to get my hopes up and then be too disappointed.

“I just took it on the chin, thinking he was just touching base and that would be that. Then he called me yesterday [Tuesday] and basically said congratulations and that I was in the squad. I can’t remember too much about what he said after that!

“I was too happy. I was laughing. It must have been an absolute pain for him on the other end of the phone. I couldn’t really contain myself. It was just incredible. One of the best feelings of my life.”

With the Six Nations just two weeks away, plenty of eyes will be on the five uncapped players that will be descending upon Oriam in the coming days. Along with Christie, London Irish’s Kyle Rowe and Ben White will be vying for places, as will former England U20 scrum-half Ben Vellacott and Glasgow Warriors flanker Rory Darge.

When looking for references about the Saracens man, Townsend spoke to two former Scotland internationals who call the StoneX Stadium home.

Both Kelly Brown and Tim Swinson received calls from the national team head coach, their opinions no doubt doing plenty for the former Harrow student’s chances on top of his good form.

After learning the news, what came next was calls to his family. FaceTiming his mother, father, two brothers and grandparents, Christie broke the news to those nearest and dearest to him, a task that will no doubt live long in the memory.

“My mum was out walking the dogs and she had to sit down on the floor for a little bit, just to compose herself,” Christie laughed. “My dad was just screaming. My older brother was at the office, so he couldn’t really make any noise and then my little brother was just at home and he was laughing.

“My grandparents were completely over the moon. They completely lost the plot. That was great fun. That was actually the best part, for me, being able to tell my family. I have actually filmed all my family’s reactions and they are quite funny, so I might have to post them somewhere.”

Within half an hour of the interview ending, Christie published his family’s reactions on social media. In minutes, those videos went viral with Saracens resharing as did World Rugby and Scottish Rugby, whilst thousands more watched on as a love for a son, grandson and brother was laid bare for all to see.

Been a crazy 24hrs, highlight has been telling my family???? @Scotlandteam pic.twitter.com/DSGKNVfusA

Capable of playing across the back-row, Christie’s versatility could prove to be invaluable for Scotland during the Six Nations. It was at U16s where he first wore a thistle on his chest, but at U18 and U20, it was the Red Rose of England that was the 22-year-old’s main priority, so why choose Scotland?

“I feel like this has been quite a breakthrough year for me and it seemed so far away that I haven’t really thought about it in any sense that I could actually play internationally any time soon,” Christie explained.

“It is one of those things, you often get a vibe from people. I spoke to Gregor and the things he said about how he sees me, the way Scotland play and the team he wants them to be, it felt like such a good fit and it would have been ridiculous not to bite his hand off.”

Before making an impact in Saracens’ first team, he spent time with Old Albanian and Bishop’s Stortford in the National Leagues. Following in the footsteps of many others in making their way down to local clubs to ply their trade, it was as a result of the Covid-19 disrupted 2019/20 season that he was able to become a Premiership regular.

Primarily having represented Saracens in the A-League and Premiership Rugby Cup up to that point, the heavy rotation that clubs had to do whilst playing midweek games opened the door to youngsters up and down the country.

Already in the knowledge that the club would be playing in the Championship the following season after having 105 points deducted for salary cap infringements, there was nothing to lose for Christie and others hoping to make a name for themselves.

It was then in the truncated campaign in the second division that further strides were made. Taking part in eight games, Christie continued to improve, scoring vital tries and playing a part in what he is describing as a “breakthrough” season.

“I think a lot has contributed to it,” Christie said. “Obviously (there is) the boys and the coaches around me, and I think last season was massive for me, being able to play much more of a role, and you get to a point where the best way for you to learn is by playing.

“I don’t feel my development has been rushed. I think Sarries have been brilliant with that in terms of allowing a player to grow, and by the time you get the chance to play for Saracens, it has often been the case that a player is ready because they have been given the chance to develop. 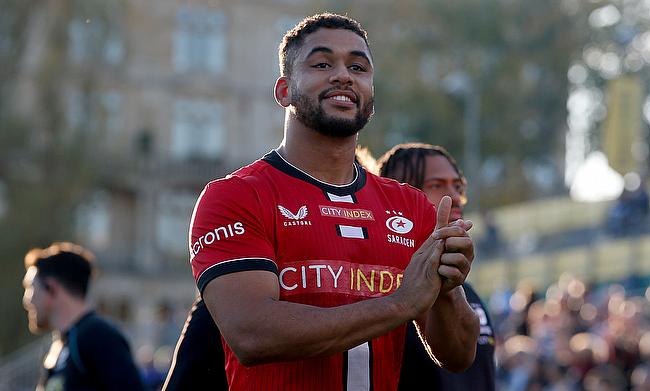 “The mental aspect of the game has been massive for me and my development and maturing as a player through the help that the club has offered me, through the coaches and other players. Calum Clark’s role at the club (Wellbeing and Personal Development Manager) has been big for me too.

“He has come to the club on that side of things and that has helped me hugely, just being able to sit down and talk to him. He is someone who has been through his career, he has lived it, so anything I say to him he can sympathise with. That has been massive for me.”

Walking through the doors of Woollam’s Fields as a bright-eyed teenager must have been quite the experience for Christie. Getting a rugby education from a squad that includes numerous England internationals, British and Irish Lions, Springboks and plenty of the best club players to have ever played the game seems like the perfect start to a rugby career.

Mark McCall said on Wednesday he felt as though the 22-year-old has plenty to offer Scotland moving forward: "He's a fantastic athlete, very skilful player, but he's added some important things - consistency, low error rate. I think once Gregor sees him in the flesh, he'll accelerate quickly into their matchday 23."

Charged with leading the Saracens Storm in friendlies this season too, Christie’s own star is very much in its formative years, but clearly visible. Slotting in at No.8 when Billy Vunipola has been unavailable for selection, the back-row is likely to be a staple for a number of years in both the Premiership and Champions Cup.

However, outside noise is outside noise. What matters for Christie at this moment in time is sticking to the formula that has allowed him to earn the affections of Townsend and the rest of his coaching staff.

Again, timing has much to do with everything even though there would have been moments where the road to a starting place might have looked more precarious than it does right now.

“It is something that I have worked with the coached and talked with Calum about,” Christie said. “Because Sarries has often been a place full of incredible players, it is tough to accept that you might not get the game time that you want for a long time or be involved with the team because you have got superstars ahead of you.

And whilst the next game for this exciting young talent could well be Saracens' clash against London Irish on Sunday, the Six Nations is now on Christie's radar.