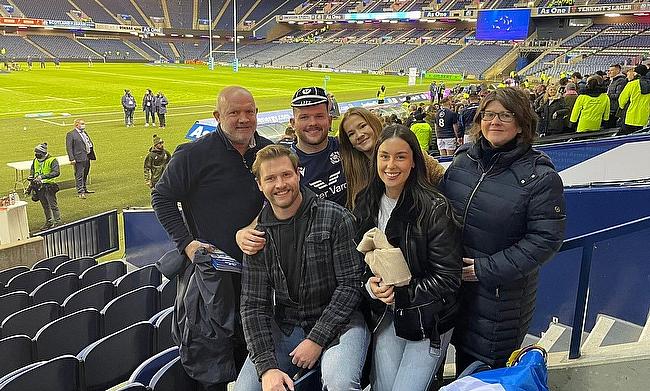 The Ashman family - Jonathan, Ewan, Emily, Fraser and Carole - and Ewan's girlfriend Caitlin had a dream day on Sunday
©The Ashman Family

After Ewan Ashman was called into action off the bench in just the 10th minute of Scotland’s clash with Australia on Sunday, the Sale Sharks hooker admitted he did not have any time to feel nervous.

And the 21-year-old, making his full debut having starred for the under-20s previously, certainly did not look nervous when he showed awareness and athleticism that any winger would be proud of to score a vital try in the corner in the 58th minute.

In the end, the Scots held on to win the Autumn Nations Series match at BT Murrayfield in Edinburgh 15-13 and, at full-time, most supporters felt they had been put through the wringer.

Although no doubt emotional inside, Ashman, however, still looked as cool as a cucumber when he and fellow new boy Josh Bayliss of Bath were given the honour of lifting the Hopetoun Cup by skipper Stuart Hogg moments after the final whistle.

After taking the applause from the capacity crowd the players then headed into the changing rooms to enjoy a beer and Ashman and Bayliss were presented with their first caps.

And when Ashman headed back out pitch side to take the enormity of the moment in, he was able to join his family - dad Jonathan, mum Carole, twin sister Emily and older brother Fraser - and his girlfriend Caitlin in the West Stand to take some photos that will no doubt take pride of place on the Ashman mantlepiece for years to come.

“It feels like a dream,” dad Jonathan, who is originally from Edinburgh, told TRU on Monday as he drove back southwards to home in Cheshire.

“Once we got to the stadium on Sunday, myself and Carole were really trying just to keep it together because it has been an ambition of Ewan’s to play for Scotland since he was a wee boy.

With a whopping 66% of the votes, @Scotlandteam debutant @EwanAshman2 wins the #AutumnNationsSeries Try of the Week for Round Two ?????????????? pic.twitter.com/aQwqO5YZ1f

“We managed to calm ourselves down after the anthems and settled down to watch the game thinking he would perhaps come on at some point in the second half.

“Then when George Turner was unfortunately injured early on and we saw Ewan stripped and ready or action the emotions started to come back again and to see him run onto the pitch in the Scotland kit was just an amazing moment.

“In a way coming on so early took away any nerves he may have had and he just had to roll his sleeves up and get stuck in.

“He settled into the game well and was doing a good job and then when he scored the try in the corner in the second half it was bedlam in the stand!

“Then at the end to see him walking round the pitch holding the trophy with the rest of the squad after a win, it was just incredible.

“Ewan was born in Canada when we were out there as a family and has lived the rest of his life in Sandbach, but he has always known of his Scottish roots and I used to take him up to Edinburgh for international games and we even went to Rome to watch Scotland play once.

“He has worked so hard for this moment and we are very proud of him.”

“When I saw him wearing his cap I just wanted to give him a big hug!”

Mum Carole admits there were tears in the eyes a few times on Sunday and despite being originally from Chorley in Lancashire she was certainly cheering on Scotland all the way.

“There were a few times during the game where I was thinking to myself ‘how is that my little boy out there, time has flown by very fast’ as it seems like only yesterday he was playing junior club and schools rugby in Sandbach,” she admits.

“However, as Jonathan said this has been Ewan’s dream for a number of years now and to see him out there doing his thing was a special moment for the whole family.

“When I saw him wearing his cap I just wanted to give him a big hug and it was great that he was able to come into the stand and spend some time with the family and Caitlin and really try and take in the moment together.

“There are a lot of people who have helped him to get to where he is and I know the guys at Sandbach RUFC and Sandbach School were watching on television because we have had lots of messages while people like Rob Webber and Byron McGuigan [who have been/are Sale team mates and also coached at Sandbach RUFC] have been great supporters of Ewan.

“Ever since he joined up with the wider Scotland squad he has great support too, for example more experienced hookers like Stuart McInally and [currently injured] Fraser Brown are often in touch with him and that has helped him feel comfortable in that environment.”

Ashman’s rugby journey began at Sandbach RUFC when he was in the minis section and he played all the way through the age-grades before turning out for the senior first XV when he was around 17 just before he joined the Sale Sharks Academy.

“I was very happy to see him get on the field on Sunday as I sat there watching TV,” Sandbach RUFC president Pad Davenport said.

“Ewan and his brother Fraser have been involved with the club for many years and Fraser still plays for the club, so I know a lot of the current players and members were all watching too and were really chuffed.

“He used to be a back-row player and, as part of his move to hooker, he really worked hard on his throwing with Rob Webber when he was a coach at the club.

“But the way he took that try at the weekend, it was more like a winger or even an American footballer, it really took great skill to stay in the field of play and to get the ball down.

“The best thing about Ewan is that he is very down to earth, he certainly won’t get carried away with his current success.”

Players with Sandbach RUFC connections like the late David Wrench, John Olver and Mark Cueto have earned full England caps in the past, but Ashman is the club’s first full Scotland internationalist.

“We look forward to welcoming Ewan back down to the clubhouse for a quiet beer to toast this moment when his Sale and Scotland commitments allow,” adds Davenport.

“His moment in the sun will give his mates who still play for Sandbach a big boost as most of our playing base is made up of local lads.

“For an amateur club we like to think we punch above our weight when it comes to producing international age-grade and professional players and he will take pride of place in our ‘Hall of Fame’ going forward.”

“As a teenager, Ewan was so dedicated and focused”

Whilst he was playing at Sandbach RUFC, Ashman was also taking part in rugby at Sandbach School.

“Ewan was a very talented discus and shot put athlete competing at county level there while he was prominent in the under-12 and 13 school rugby teams.

“His year group’s school rugby really took off from under-14 age upwards and he became captain of the team and their rugby development gained momentum, indeed I don’t think they lost a game in Year Nine.

“The coach at that stage was Oliver Sutton and at the end of their under-15s year, he said that he felt Ewan had the potential to make it as a professional player.

“Mr Sutton felt that Ewan was so dedicated and focused that he really could progress in the game and so it has proved.

“He would do the school sessions and then he would do extra sessions with other coaches and his father Jonathan and he always went the extra mile. 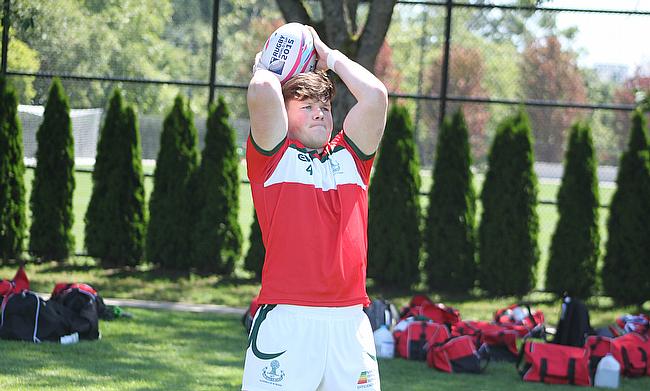 “By Year 11 [under-16s] he was representing Scotland and for three years he was a member of the school’s senior team, culminating in a tour to British Columbia in Canada in 2017.

“At that time he was coached by Peter Allen and Stuart Dodds.

“We have Ewan’s Scotland under-16 and under-20 jerseys up in the school refectory and hopefully we can add a full Scotland one up there at some point.

“He has always kept in touch with the school and comes back when he can to inspire the next crop of rugby hopefuls, indeed he was here recently to open the Powerbase Gym which will support the Talented Athlete Programme in the Sixth Form.

“He is a great role model and inspiration to not only rugby players at school but all of our pupils and what a story it is.”

Scotland take on South Africa at BT Murrayfield in the Autumn Nations Series on Saturday with a 1pm kick-off, the game is live on Amazon Prime.