"They were lovely phone calls to make”: Edmunds and Davidson given chance with Scotland Sevens 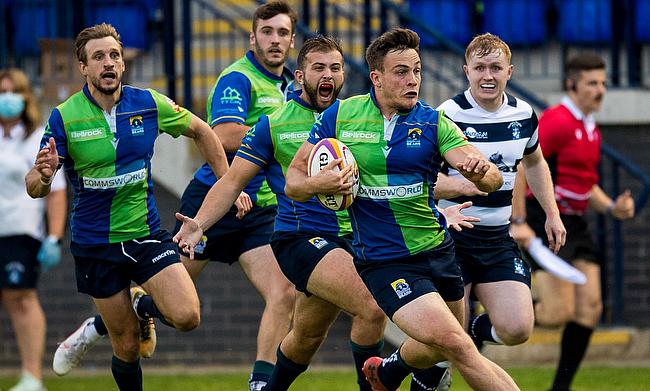 GB Sevens: Roques and Forrest’s notebooks full to bursting as big decisions edge closer
Alec Coombes Exclusive: “I went to the Hong Kong Sevens as a kid - now I want to play in the Olympics”
Paddy Kelly Exclusive: “Sevens has reinvigorated me as a player”
Jamie Farndale Exclusive: “It’s all I’ve thought about since missing out on Rio”

Scotland Sevens head coach Ciaran Beattie has had over 600 days to think about who to select in his core squad for the 2022 HSBC World Sevens Series.

And although he has been lucky enough to call upon a number of the group that were involved before the pandemic hit in March 2020, he has also handed opportunities to new boys Jordan Edmunds and Matt Davidson to show what they can do.

All being well - with a Commonwealth Games and then a World Cup to come later in 2022 after Series events in Malaga, Seville, Vancouver, Los Angeles, Singapore, Toulouse and London - the duo will have plenty of chances to show what they can do on the big stage.

Scotland Club XV cap Edmunds has been a standout performer for Boroughmuir and Boroughmuir Bears in the Tennent’s Premiership and the FOSROC Super6 over the last few years and he is a winger who likes to come off the touchline and look for the ball.

Davidson, a former Scotland age-grade cap, had a spell at London Scottish before being one of the star performers for Ayrshire Bulls at full-back as they won the Super6 2021 title.

“They were lovely phone calls to make,” Beattie told TRU. “Both of the guys have worked really hard at their games and I liked what I saw from them during the Super6 season.

“It will be interesting to see Jordan’s transfer from XVs to sevens. He is some athlete and he knows his way to the try line so it is about me as a coach and the other players in the core group getting the best out of him.

“Good luck to anyone that finds themselves in his path. He has had some journey and he is desperate to get his shot while he really is a dangerous runner in open field.

“Matt came into train with us when he was with Glasgow after his time with London Scottish and there were some fairly constructive conversations around where he needed to improve.

“He has used the Covid break and Super6 to really improve. He is double the player he was. I am delighted by his approach.”

“It has been a long time coming”

Anyone who knows former Scotland Sevens player Beattie well will be aware that he is an energetic character and as a result, he is now like a kid at Christmas given that he has plenty to plan for.

Great Britain are currently out in Dubai playing in the first two 2022 Series events, but after the new year, it will revert to Scotland, England and Wales having their own teams on the men’s circuit.

“I am delighted with the squad I have managed to put together. It has been a long 18 or 19 months or so, 629 days I think it has been since we last played as Scotland,” he said.

Setbacks in life can be hard to bounce back from, but they can also make you more determined and Jamie Farndale has his sights set on reaching the Tokyo Olympics this summer #TeamGB

“It was good to have the FOSROC Super6 league to watch recently because that was exceptional and it gave me a chance to look at a number of players.

“I managed to start sleeping at night when I realised I could put together a decent squad through guys from that competition and other experienced sevens players.

“There is a good blend in the squad and all the guys have different journeys and stories.”

The ‘blend’ Beattie talks about is led by experienced players such as Jamie Farndale, Gavin Lowe, Harvey Elms, Ross McCann and Alec Coombes, while newer faces include the aforementioned Edmunds and Davidson alongside Paddy Kelly, Femi Sofolarin, Kaleem Barreto and Callum Young.

And one player with a wealth of experience - Lee Jones - re-joins the programme having previously played 25 Series events and three Commonwealth Games.

“100 per cent”: Lee was always keen on sevens return

Selkirk lad Jones, a 33-year-old winger in the XV-a-side game, earned 10 full caps for Scotland and represented Edinburgh Rugby and Glasgow Warriors with distinction in his pro career until the summer.

“It’s probably always been in the back of the mind throughout my career that if there was ever a chance to get back and play a bit of sevens, that would be a choice I would make,” he explains.

“As soon as Ciaran offered the opportunity, the first thing I’m thinking is ‘yes, 100 per cent’. I had a few conversations with some different folks and came to the conclusion that it was a really good fit for me. I still feel I’ve got a lot to offer the game.

“I wanted to play at least another year, and for this opportunity to come up in what is a massive year for sevens - I want to grasp it with both hands. I’m delighted to get back into a sevens programme and get going.

“Seeing the squad put together on paper, I think it’s really exciting. There’s a mix of guys who have got a lot of experience and a couple of potential new caps in there. Guys like Kaleem Barreto, Jordan Edmunds and Matt Davidson will be so excited to get going and they’ve got a lot to offer the sevens game.”

Notable absentees from the core squad named are Robbie Fergusson and Max McFarland, who both went to the Olympics and are currently with Great Britain in Dubai. Fergusson has signed for Glasgow Warriors, while McFarland’s next move is unknown currently.

And, of course, with 13 players going to each event, there will be opportunities for others to join the group as things move along.