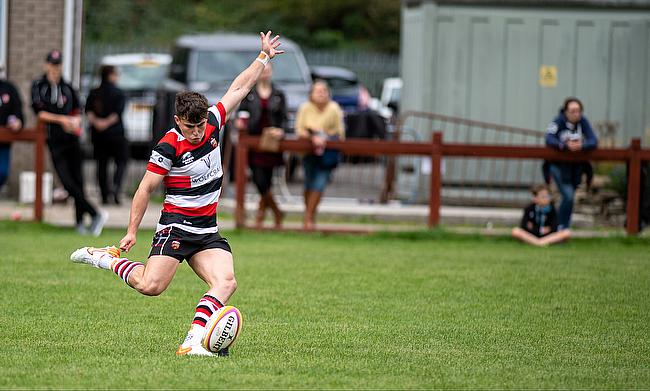 Due to injuries and the pandemic, Euan Cunningham has had to bide his time over the last couple of years to get his senior rugby career properly up and running.

When Covid-19 stopped the whole of Britain in its tracks in March 2020, Cunningham was carrying an injury which had stopped him from playing a full part in his Scotland under-18 year and also from breaking into the Stirling County team during the inaugural FOSROC Super6 season.

However, he was still at school and was already training twice a week with the Glasgow Warriors Academy, so he knew that he had time on his side.

Fast forward to the summer of 2020 and he was handed a full-time Academy contract with the Warriors.

“Having had a taste of life in the Academy during 2019/20, it was good to be able to head into that environment straight after school full-time especially with a lot of uncertainly still going on in sport and other sectors due to the pandemic,” Cunningham, now 19, told TRU.

“In the first few weeks it was a bit of a culture shock, it made me realise just how much hard work goes into training and that rugby is more of a lifestyle than just a job.

“I had moved through to Glasgow from home in Stirling and was getting used to that, but everyone really helped me settle in and I felt I soon got into a good rhythm with the training and working on different parts of my game.

“It was good seeing other young players who I was working with day in and day out earning chances with the first team squad at the Warriors for sure.

?? 11 points from the tee for @StirlingCounty from Euan Cunningham
2? tries on his @AyrshireBulls debut for Finlay Callaghan
8? FOSROC Scottish Rugby Academy talents in action across the board

Not a bad weekend of @Super6Rugby for our lads ?? pic.twitter.com/MjpnxLz98l

“Seeing the way that guys like Ross Thompson and Ollie Smith [who now have full-time professional contracts at Scotstoun] went about their business really set the bar for me and gave me something to aim for.

“I also learnt a lot from the experienced players at Glasgow last year and someone like Ian Keatley was great with his time. He has since departed the club, but during his short time here he was always helping me out and I really appreciated that from someone who has been there and done that.”

“I am in a positive frame of mind right now”

Training was going well, but the frustrating thing for Cunningham was that during 2020/21 he only played two actual matches, one an internal ‘hit out’ at Warriors and another when the club’s ‘A’ team took on their Edinburgh Rugby counterparts.

During the summer he earned his first three Scotland under-20 caps off the bench against England and Wales and from the start against France in the Six Nations in Cardiff, but they were all at scrum-half.

Now in his second season as a full-time Academy player at Glasgow, he has been itching to get a run out at stand-off for a long time now and it finally came a couple of weeks ago when he put in a very assured performance in the number 10 jersey for Stirling County in the Super6 win over Watsonians.

“The end score was 41-39 which was a bit closer than we would have liked having dominated parts of the game, but for me personally it was great to get a run at 10 and I tried to put all the things I had been working on with the Warriors and with the Super6 squad into practice,” Cunningham explains.

“I started the following game against Heriot’s too which we also won [17-16 last Saturday] and we have one final regular season game to come and then the Finals Weekend.

“Now I just want to try and finish this 2021 Super6 season on a high and then kick on with the Warriors in training and, hopefully, with the under-20s in early 2022.

“I feel like things have been a bit ‘stop-start’ since I left school, but I am still young and learning from some of the best pros around so I am in a positive frame of mind right now.”

“I just remember loving rugby from the age of six”

So, where did his love of rugby begin?

“I started when I was about six years old, my Dad took me down to the minis at Stirling County and I just remember loving it,” Cunningham, who at the stage was a pupil at Cambusbarron Primary School in the city, recounts.

“It just became routine to head to rugby every weekend and I made lots of friends at the club from different primary schools, so that was great.

“As we got older we all fed into Stirling High School, so by the time we were heading into our teens we were all school mates as well as team mates and we enjoyed playing as a team together moving through the ranks at County.

Max Williamson powers over from short range for the visitors.

?? Highlights of this game will be available tomorrow morning pic.twitter.com/xL2sxkifPa

“We had some strong teams over those years and County has always been well-known in Scotland for its youth set-up so we learnt from some really good coaches.”

At the same time as he was playing for County at age-grade level he was also representing the Caledonia region.

Performances on that stage led to him being selected for Scotland at under-16 level when two squads - the Reds and the Blues - headed down to the Colwyn Bay Festival in Wales.

“I was in the Blues squad when we went down there and it was a really good experience because it opened my eyes a bit to the level you had to be at to compete with the top players from other home nations and it tested out my decision making on the pitch like never before,” Cunningham said.

“My under-18s year was in 2019/20 and sadly I was carrying an injury at the point when the season was cut short by the pandemic just before we played England.

“In that year though I was able to travel through to Glasgow a couple of days a week to link up with the Academy players at the Warriors and doing that while still being in my last year at school was pretty cool.

“It gave me a taster of what I was going to be heading into on a full-time basis the following year.”