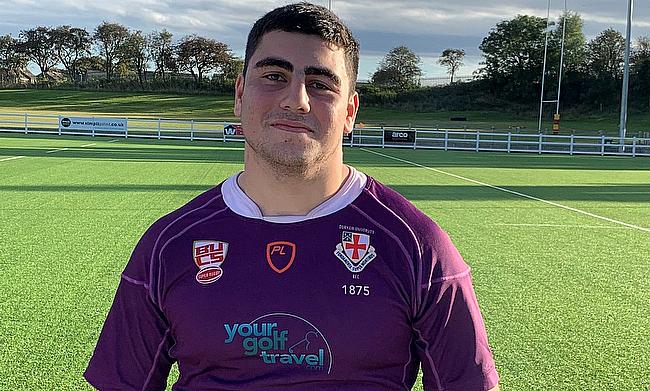 Scottish loosehead prop Tom Banatvala is fully fit and ready to attack the rest of the 2021/22 rugby season with Durham University and hopefully, the national under-20s team with gusto.

In March 2020, Banatvala and his Scotland under-18 teammates saw their chance to play at home against their English counterparts taken away from them when Covid-19 hit Britain.

A few months later, just as he completed his schooling in Edinburgh, Banatvala went to see medical specialists because a scaphoid injury to his wrist - which he first had surgery on in November 2018 - was still causing him some issues.

“With the lockdowns ongoing at the time and my university place not starting at Durham until 2021, I went back to the doctor to get the wrist problem X-rayed again as it wasn’t feeling right and it turned out that the bone graft done nearly two years before had not taken properly, meaning essentially it had not worked,” Banatvala, now 19, explains to TRU.

“I felt like I had wasted a bit of time in getting it fully sorted as a result, but I got my head around things and went in for my second surgery on the same problem in November.

The captain Tom Banatvala storms through the defence and bags a try. 24-17 to Durham. #DURVNOR

“At the time, the surgeon warned that there was less than a 50 per cent chance that the bone graft would ‘take’ second time around, but thankfully it did and from then onwards my full focus was on making it into the Scotland under-20 squad which ended up being played in Cardiff over the summer just gone.

“Mike Hayton, the surgeon, played a critical part in getting me back to full fitness and I’d like to thank him for that. Last winter was pretty tough. I was training on my own at local parks in Edinburgh while Currie Chieftains let me use their facilities and I also managed to get some gym equipment to use at home from my old school Fettes.

“There were some low days because I had lost a lot of weight post-surgery and training alone is never easy, but I just kept thinking about under-20s selection and pushed through those tricky physical and mental times.

“At the time Mike Legget was the strength & conditioning coach attached to the Scotland under-20s programme and he helped me and a lot of the other boys with solo programmes so that we could keep in the best shape possible.”

The hard work was worth it because Scotland under-20 head coach Sean Lineen picked Banatvala alongside fellow looseheads Cole Lamberton and Mikey Jones for the age-grade Six Nations a few months ago.

The player, whose mother is Scottish and whose surname comes from Indian ancestry in the family, came off the bench against England and started versus France in the tournament, meaning he now has a great platform to build from.

After a few outings for Currie Chieftains in the Scottish Tennent’s Premiership, he recently arrived at Durham University to study business and management and last week he captained the Freshers XV to a thrilling 36-30 victory over Northumbria University.

Today [Wednesday] he is due to play for Durham’s second XV against the University of Leeds at 2pm.

Going forward, he hopes to force his way into the thoughts of head of rugby Alex Keay when it comes to Durham’s BUCS Super Rugby squad - and with the work ethic he has there is no doubt he can push onto that level sooner rather than later.

So, why loosehead prop?

“I have always been a loosehead, I just love the position and the technicalities of it,” Banatvala, who played a couple of senior games for Edinburgh Accies while still at school, explains.

“Every scrum is a mental battle for the whole pack and I really enjoy playing my part in that. The laws are changing all of the time and you have to stay on top of that, but as a loosehead, you have the great job of helping your team get on the front foot in a game and in favour with the referee and I take that role incredibly seriously.

“In the set-piece I am learning all of the time while, like all front-rowers, I like to get my hands on the ball when I get a chance. We like to stretch our legs!”

From Battersea to the Scotland under-20s

Banatvala took up rugby ‘full-time’ when he was eight after a brief dalliance with the sport two years earlier.

“I was brought up in south London and my Dad took me down to training at local club Battersea Ironsides when I was six to get involved with the Minis section, but I was clearly quite a boisterous child because at that stage they were still playing Touch and I wondered why nobody was tackling each other,” he recounts.

“It seemed that I needed the physical element to enjoy the sport, so I didn’t go back after that session until I was eight and ever since then I have just loved the game.”

Banatvala played at the club and at Emanuel School until he was around 13 while his impressive form saw him selected for the Surrey regional age-grade set-up.

It was at that stage that Banatvala’s family moved up to Edinburgh and he started to attend Fettes College.

“I started playing for the school team at Fettes and by the time I reached the under-16s. I was involved with Edinburgh in regional rugby and edging towards Scotland selection,” he said.

“It was a great feeling to then be picked to represent one of the Scotland squads - the Reds - at the Colwyn Bay Festival in Wales around that time.

“That period was a pivot point in my career, a great learning curve for me in terms of preparing for matches, getting the basics right time after time, the recovery process and being able to ‘park’ a result and move onto the next game quickly.

“Someone that helped me massively around that time was Bryan Easson [now the Scotland Women’s head coach]. He was coaching us and he was big on making us realise that it is the little things that you get right time after time that can help you both on and off the pitch and make you the best athlete you can be.

“He was really important in my rugby journey.”

Banatvala was then part of a Scotland under-17s training camp to Valladolid in Spain in the summer of 2018 - pre the first wrist surgery - and, fast forward just over three years, and he has an exciting future ahead.