Cockerill had a “massive impact” on Ritchie’s career, now back-row wants to put one over on former mentor 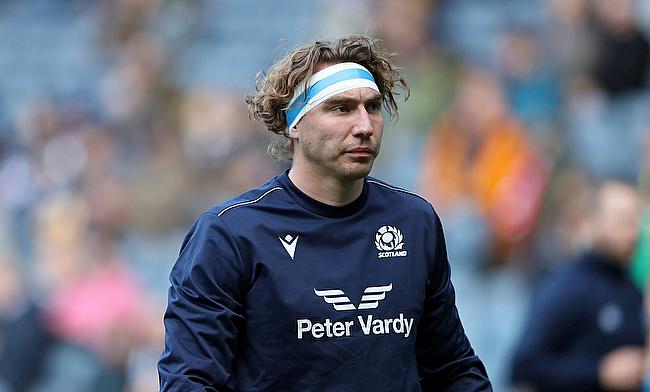 When Richard Cockerill arrived at Edinburgh Rugby in the summer of 2017, Jamie Ritchie was a back-row of some promise who was just about to turn 21.

Under Cockerill’s stewardship, Edinburgh improved - certainly in his first couple of years in charge - while Ritchie became a regular starter in the team and began to fulfil the potential that many had been hoping to see since he had joined the pro club straight from school in 2014.

Cockerill left the Scottish capital last summer after four years as head coach under a bit of a cloud, things having gone stale in 2020/21 and a number of players making it clear they were not happy with things continuing as they were.

Nevertheless, there is no doubt that Cockerill helped launch Ritchie, now 25 and with 31 Scotland caps to his name, into the world-class operator that he is today.

And the two will meet again this coming Saturday when Ritchie and co take on England at BT Murrayfield in the Calcutta Cup clash, with 51-year-old Cockerill now one of the away team’s forwards coaches along with ex-Scottish cap Matt Proudfoot.

“A massive impact,” Ritchie replied this week when asked what Cockerill had done for his rugby career.

Edinburgh Rugby today announced Head Coach Richard Cockerill has left the club by mutual consent to allow him to pursue other opportunities.

“Cockers was head coach at Edinburgh when I had my breakthrough into the Scotland team. He probably put Edinburgh in a better place than where we were before he came.

“I’ll always be thankful to him for that. At the time, when he came in, it was probably what we needed in terms of a harder edge and a clear direction. He brought that to the club and, as I say, he was head coach when I got my opportunity with Scotland, so that must have had something to do with it.

“I spoke to Cockers when he got the England job, just to congratulate him and stuff but I’ve not spoken to him since then.”

Asked whether Cockerill’s Edinburgh insight will help England in the Six Nations opener, Ritchie adds: “I don’t know, probably not really. Most teams have a style, so there are things you can look into in terms of what they may or may not do.

“He may know some of the things we’ll look to try and do, but the specifics of it, no. He might have a bit of insight into us individually, but I don’t know how that’s going to help them.”

“There is no bigger stage than a full Murrayfield against England”

Ritchie, who grew up in Strathkinness near St Andrews and played his rugby at Madras and Howe of Fife before heading to Strathallan School in Perthshire, admits these were the kind of games he always wanted to be a part of as a youngster.

His only previous experience of a home Calcutta Cup clash resulted in a 13-6 defeat two years ago, but the blindside who often acts as one of Scotland’s vice-captains was part of the squad that won 11-6 at Twickenham 12 months ago.

“For a Scottish player, there is no bigger stage than a full Murrayfield against England. It's a dream come true and we want to do that credit.

“It’s about putting our best foot forward and trying to put together our best game and I think that will compete with most teams.”

“England are blessed, they’ve got loads of good players to pick from”

With key forwards Courtney Lawes and Jonny Hill ruled out on Tuesday and the likes of regular skipper Owen Farrell, Jonny May and Anthony Watson unavailable for the whole Six Nations, some pundits have suggested that England will be there for the taking come the weekend.

However, Ritchie believes the visitors will be very tough opponents no matter what match 23 is named by head coach Eddie Jones on Thursday.

“England are blessed, they’ve got loads of good players to pick from and it’s probably quite a challenge to nail down a 23,” Ritchie states.

“Whatever team runs out there on Saturday, we’ll be ready to play and we’ll get an idea of what they want to do.

“Every team has a style they like to stick to. They’re probably in a bit of a transition as to how they want to play and the personnel around that, but there’s been a lot of rugby between the game 12 months ago [which Scotland won] and the game coming up on Saturday.

“We’re looking to concentrate on ourselves, play our best game, and whatever team they put out, that’s the one that needs to be beaten.

“As a group, we’ll certainly be playing on the emotion of it [the occasion]. It’s such a massive fixture in the rugby calendar.

“For us, it’s a huge honour to get to play in this game and we need to show how much it means to us.”

The Scotland 23 for the match is due to be named on Thursday lunchtime.