Grant Gilchrist: “I’ve got a young son that I am missing, but we are in camp with our best mates” 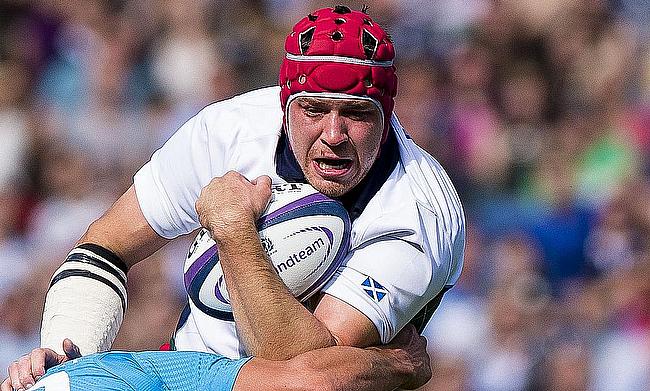 Sean Maitland, Jonny Gray miss out on Scotland selection for France clash
Match Centre: Scotland 52-10 Italy
Huw hopes to kick on: “I was pleased to get over the line, but it was a frustrating day”
“Dave is tough and has a great attitude”: Cherry puts in hard yards to get to the top

When Scotland’s players return home to their loved ones this coming Saturday, some of them will have been in a ‘rugby bubble’ for just shy of two months.

There have been comings and goings from the group while the players have had the odd couple of days out of the hotel at Scotland’s training base on the outskirts of Edinburgh, but overall it has been a long haul during this Six Nations campaign.

They would have expected to be home last Saturday night, but with the postponed match against France now taking place this Friday evening in Paris, they had to regroup after the victory over Italy ahead of one last, big effort.

To put it into context, there are a lot worse things you could be doing than spending weeks and weeks in nice surroundings and playing the sport you love, but being away from family takes its toll.

However, the strong bond in the playing group, led by captain Stuart Hogg, has kept them all upbeat as they look for a positive result at the Stade de France, which could hand Wales the title and see the Scots finish second in the table.

“It has been the hardest time to be locked down and not able to go home, but credit to everyone, they have kept each other going,” second-row Grant Gilchrist told TRU.

“The management team, led by [team manager] David Edge, have put in place for us some world-class stuff.

“The boys have really got together and we are loving each other’s company. We all miss our families. We want to go home. I’ve got a young son that I am missing, but while we are in camp, it is like we are there with 30 of our best mates.

“It is great. The craic is really good which is awesome and what could have been a really challenging time has been really good for us and we have got a lot closer as a squad.

“We have tried to do different things and switch off from rugby as well as switching on, so when we have downtime, we try to do as much as we can together and it has been quite a relaxed environment.

“There hasn’t been a lot of organised stuff. That has suited a lot of the guys and we are all pretty comfortable with each other now and we are in a good place to be able to switch on or switch off without having to go home which is great.

“That togetherness will be really important this week again. A lot of the boys play darts, so there has been plenty of darts.

“My darts game has gone from terrible to average so folk have been misleading you if you think I am any good, but I did fluke a 180 and I have been telling everybody under the sun!”

“There is no reason why we can’t win in France”

Last Saturday, his son Freddie and wife Chloe will have been cheering as they watched the TV because Edinburgh Rugby’s Gilchrist teamed up with Exeter Chiefs’ Sam Skinner in the second-row as the Scots saw off the Italians 52-10 at BT Murrayfield.

With first-choice lock pairing Jonny Gray and Scott Cummings missing the trip to France through injury, the duo look set to start again this week.

The Italy match was Gilchrist’s first start for his country since the victory over the French last March, as he missed the Autumn Nations Cup with a groin issue that sidelined him for three months.

He also looked good off the bench against Ireland and the 30-year-old, who has 44 caps to his name, said: “Against Italy, I think it was about making sure we got our own performance right and got the job done which we did.

“There are things we could have done better, but we are happy with the overall performance and it sets us up for a huge week.

There are things we want to get better at - and will need to be better at - against France, but what an exciting challenge and one this squad is really looking forward to.

“We have performed well away from home in recent times. The boys won down in Wales at the end of last year’s Six Nations and then we had the win at Twickenham in February. It shows we can perform on the road.

Gilchrist made his Scotland debut in Paris back in March 2013, but the country has not won there since 1999.

The Scotland squad for the big France match is due to be named on Wednesday lunchtime.